Where will the Goldilocks zone be when the Sun becomes a red giant?

In about 5 billion years, when our Sun expands into a red giant making our planet uninhabitable, where will the new Goldilocks zone be? Could life form on a new planet in the Goldilocks zone? Environment suitable for human life?

The habitable zone is typically defined as the range of orbits where liquid water can persist on a planet. This is somewhat ill-defined, since climate modelling of planets with various properties (atmosphere density and composition, rotation, etc.) changes distances where water can persist. But to a first approximation the habitable zone scales as $R_{hz}=\sqrt{L/L_\odot}$ AU, with fuzzy boundaries somewhere around $0.7 R_{hz}$ and $1.4 R_{hz}$ (Venus and Mars might perhaps, had things gone differently, been habitable). Different sources will give you different limits.

As the sun evolves it will first become a sub-giant. The sun is estimated to reach its hottest surface temperature of 5820 K in 2.55 Gyr with a luminosity 1.26 times brighter than at present. At this point Mars (orbiting between 1.38 and 1.52 AU) might actually start looking habitable. This is still way after Earth's biosphere is expected to fail (in 1.6 Gyr, according to some estimates).

In about 5.42 Gyr the sun starts really going red giant. The luminosity shoots up from 1.84 times the current luminosity to 2730 times in 7.59 Gyr. Obvious bad news for Mars. But now the habitable zone sweeps out towards the Kuiper belt.

There are some complications here due to mass loss. The luminosity increases in a nonlinear way. As a red giant the sun will also lose significant amounts of mass, and this will make planets spiral outwards. (This is also why there is disagreement about whether the Earth will be absorbed by the sun or escape; this depends on a lot of factors with big model uncertainty.)

An earlier paper by Schroeder, Smith and Apps estimated the time different planets and moons would be in the life zone. Mars would according to them be in the habitable one in 11.6-11.7 Gyr. They suggest that Jupiter's moons would be there in 12.07-12.10 Gyr, Saturn (Titan) 12.139-12.147 Gyr, Uranus (Oberon) 12.162-12.164, and Neptune never really gets any habitable period. Note that the time intervals are really short, just a few million years in the outer system. Worse, the periods are temporally disjointed: the solar system will not be continuously habitable.

So, there is a bit of disagreement between the papers on the habitability periods of Mars, but it seems clear there will be a time in the future when Mars (if given enough volatiles) might be habitable. I would not expect much from the gas giant moons, although they would make a fascinating setting.

Every answer at the time I wrote this answer of mine focused only on the final and most catastrophic stage of the "red giant". In fact, the Sun evolution after it leaves the main sequence is a more progressive matter. So let me fill that gap.

What is actually called the red giant (RG) stage is not that crazy bright actually, and then, after culminating in what is called the helium flash (because of a brief phase of nuclear fusion of that element), it is followed by an even less bright phase known as the horizontal branch (HB) whose name comes from the fact that the luminosity varies very little. Then, and only then, starts the catastrophic final stage considered in the other answers, which is called the asymptotic giant branch (AGB). The following diagrams show all of this schematically (horizontal axis in billion years, vertical axis in relative luminosity compared to the Sun in the present): 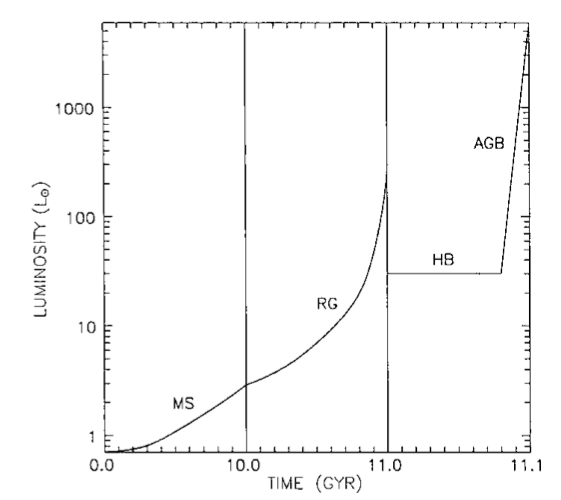 This is taken from the classic paper on Habitable Zone by Kasting et al [KWR93] and, quoting the authors

Note the changes of the time scale at 10 and 11 Gyr. The discontinuity at 11 Gyr is caused by the helium flash. [...] The final white dwarf phase is not shown. Details of the evolution during the HB and AGB phases are omitted.

Thus the other answers specifically focuses on the AGB stage. But clearly the proper RG stage and the intermediate HB stage have much more reasonable luminosities that should give habitable zones still within out solar system.

Wikipedia has a more detailed diagram for the evolution of the Sun, which also gives the temperature, which we need to compute the habitable zone. 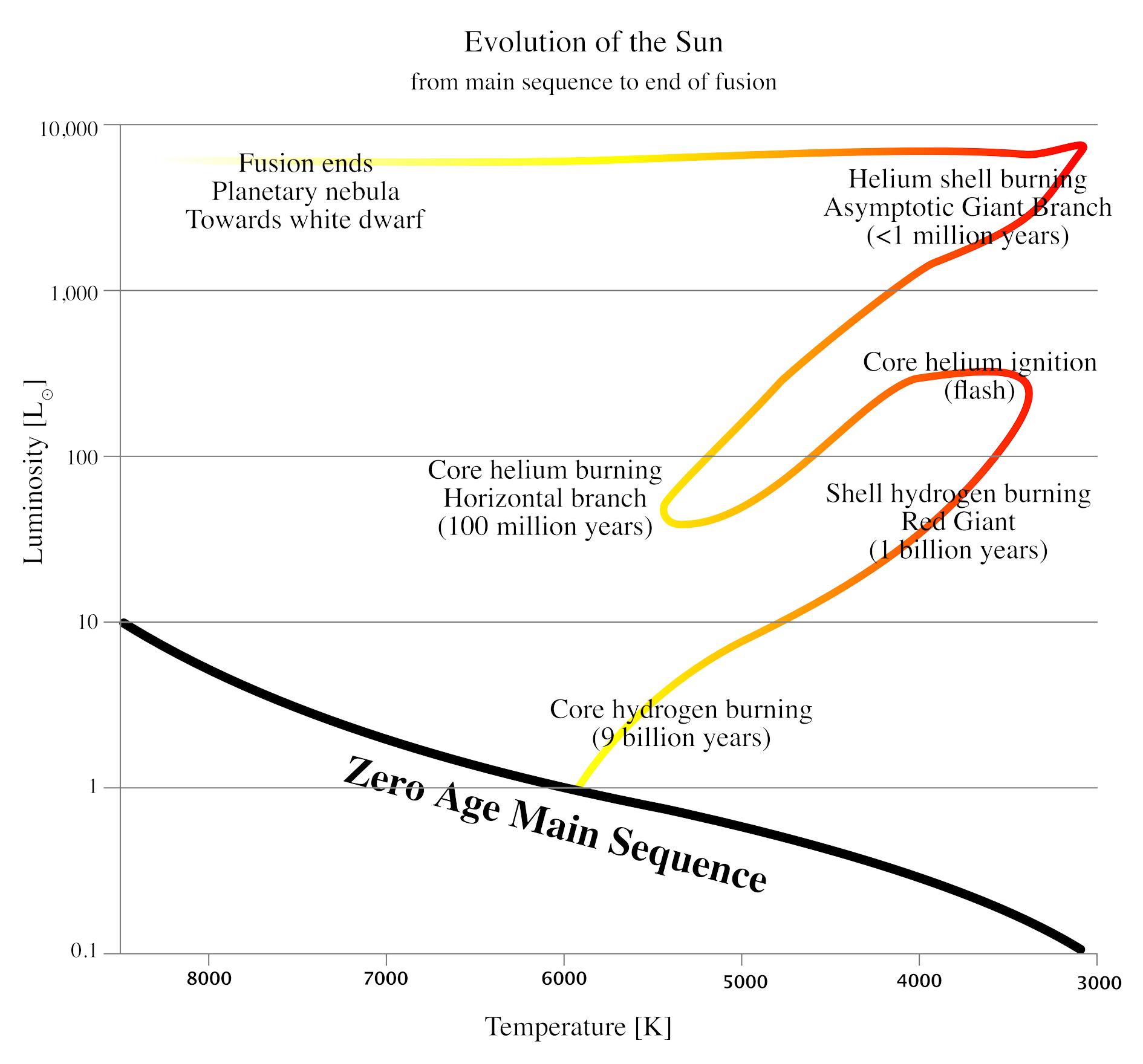 I am going to use the model in [KRS+14], which is the same article quoted by @KyleOman. I will consider three milestones: the end of the main sequence, the end of the red giant just before the helium flash, the end of the horizontal branch.

I get for the inner and outer limit of the habitable zone, in AU,

This is to be compared with the following rough distances:

So definitively, the satellites of some of the giant planets would be in the habitable zone in some of the stages after the Sun has quit the main sequence and before the catastrophic asymptotic giant branch.

When you say 'makes our planet uninhabitable', that's quite an understatement, since it will actually be inside the Sun (not that there's a hard edge, but you get the idea).

Picking some nominal values for a red giant star:

In terms of habitability, it's hard to imagine anything in the Solar System being habitable, since there are no known planets$^1$ that far out. There are smaller bodies, but lacking atmospheres these are going to be a tough sell for future real estate agents.

$^1$There's that Planet 9 thing, but that's been largely debunked, at least for the moment.

Fortunately, our galaxy won't last that long. The Shapely-Super-Cluster is pulling hundreds of galaxies, including our Milky Way, into a large gravitational anomaly called "The Great Attractor". It's only 220 million years away... Which is pretty darn quick when compared to five billion years. The Sun will be OK for a long time because it doesn't have anywhere near the density/mass to supernova.

Not the answer you're looking for? Browse other questions tagged astrophysics sun solar-system stars stellar-physics or ask your own question.

3
What are some ways that humans could have influence over what sequence a star was in?
11
How fast will the sun become a red giant?
10
When the Sun goes red giant, will it “vaporize” away a significant fraction of Jupiter and Saturn moons?
6
Earth-Moon orbiting each other after being engulfed by Red Giant
3
How long until the sun cannot sustain human life on earth?
0
What will happen to the Earth when Milky Way and Andromeda merge?
4
Is there a prediction when our solar system would fall apart?
0
What will be the mass of the sun when the core is depleted of hydrogen about 5 billion years from now?