Why would an alpha-beryllium neutron source generating a radioisotope not produce controllable net power?

I have a question. I was looking through the table of nuclides and noticed that the energy needed to produce certain radioisotopes was less than the energy given off by the radioactive decay of that isotope. Looking at the isotopes, the energy balance came off positively for the following reaction chain:

The reactor could be powered using a 2.7 MeV electrostatic accelerator and helium ion source, with the reactor running itself and giving net power by extracting energy from the moving beta radiation using the 2.7 MeV potential difference.

So my question is why would this not work? From my point of view it seems the main stumbling point is ensuring the helium ions that are accelerated a) get completely ionized with minimal wall losses and b) attain enough energy to hit the beryllium nuclei before scattering to the walls.

And it might be the efficiency of the energy extractor, the beta radiation would also need to have minimal wall losses to ensure enough energy is extracted to keep the reactor running.

Are these the main stumbling blocks or are there others that I am missing? What would be some ways of solving these problems?

In short: It is reasonably feasible this reactor, at least in theory; so maybe there are technical difficulties out of this scope which prevent its usage it in practice.

The reactions you present give an energy balance of the overall reaction for the reactor to work. This is a good start, but then to go further in responding what the real possibilities are, you need to balance the probabilities of each step in the reaction (cross sections, energy and geometry dependent), the time each of them takes to complete (or the rate at which they occur) and the sustainability of this reaction. All of this can be very complex (and is only the theoretical part in assessing the possibilities of the reaction) so in the following we are going to continue the naive approach: geometry and composition will be assumed optimal, without considering their practical feasibility.

Elements to be considered

Neutron production in the first reaction $^4He+^9Be$ for different energies

First, a note on the idea of using accelerators for driving reactors: this was proposed already by Nobel Prize Carlo Rubbia (see wikipedia) and is still in active research, currently using Thorium as the strongest candidate for fissile material, there are a number of publications and international conferences (iThEO) investigating this possibility.

Ion accelerators exist and are rather abundant, so accelerating $^4He$ would not be a problem, as long as we can extract more energy than spent.

$^9Be$ has a 100% natural abundance, so this already works for us: no extremely complex chemical separation needed in order to increase the rate of our first stage reaction. However is not so abundant compared to other materials on Earth, and we won't discuss the details on how could it be extracted from the compounds found in nature. 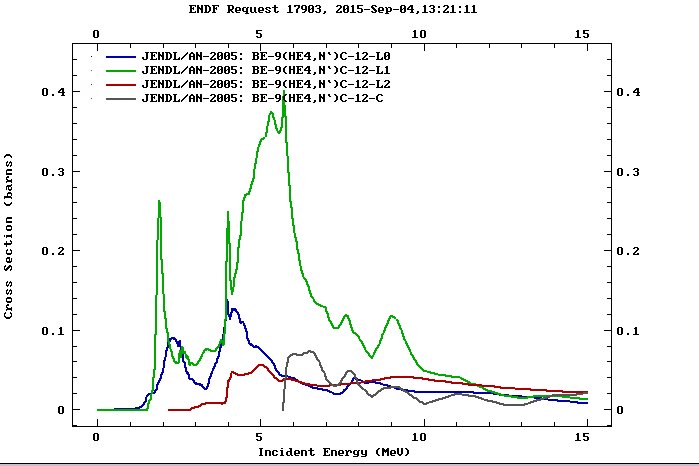 The figure above (taken from IAEA) shows the cross sections of the first reaction which appear to be very good: in the order of magnitude of $0.1 barn$. Now based on this figure let us assume the initial energy of the alphas is $10 MeV$ for convenience and because we would like to get the highest peak observed. This means that the neutrons released from this reaction will have energies up to $15 MeV$, because the difference in mass from the reacting nuclei to the resulting ones is about $5 MeV$. These neutrons will be in the so called fast range, or will be fast neutrons.

On another subject, this is a direct reaction which means it should occur for times in the order of $10^{-21} s$ so is very fast. The same holds for the next reaction involved in the process which also works good for the total process, because the slowest is the last one where the $T_{1/2}$ of $^{12}B$ for beta decay (100% by the way) is $20ms$ (see Nuclear Data tables). Let us average the total cross section of all these possible processes to $\sigma_1 = 0.3 barn$.

Neutron thermalization for $^{11}B$ capture and its cross section

$^{11}B$ has an 80% abundance in nature which is also good. As with $^9Be$ is easy to find and there is probably no difficulty in extracting. In the figure below (taken from IAEA) we see the cross section of neutron capture for $^{11}B$, and is rather low, especially since our neutrons have the energies mentioned above. This means they would need to reduce their energy in order to increase the probability of this capture reactions. Luckily all the elements we are considered are very good moderators, which means neutrons will moderate fast, and we can consider most of them will be captured. Let us assume here that the average cross section for $^{11}B$ neutron capture is $\sigma_2=10^{-5} barn$. 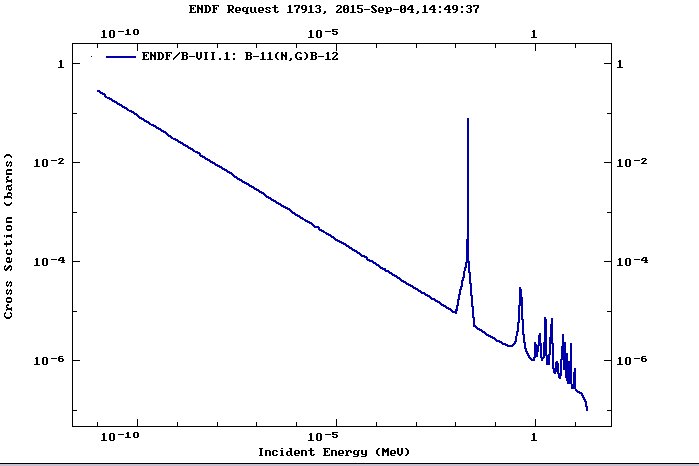 On the other hand because $^{10}B$ covers the other 20% abundance, 20% of the neutrons encountering a boron nucleus, won't produce $^{12}B$ because they found $^{10}B$. But will they produce $^{11}B$? How much? From the figure below (taken from IAEA) the cross section for neutron capture of $^{10}B$ is shown. Is approximately $10^{-4} barn$ which is an order of magnitude higher than the previous one. Although we won't consider here the addition of new $^{11}B$ from this reaction, we note that it might balance the previous one since the reaction cross section is 10 times larger, while the abundance is only 4 times smaller. 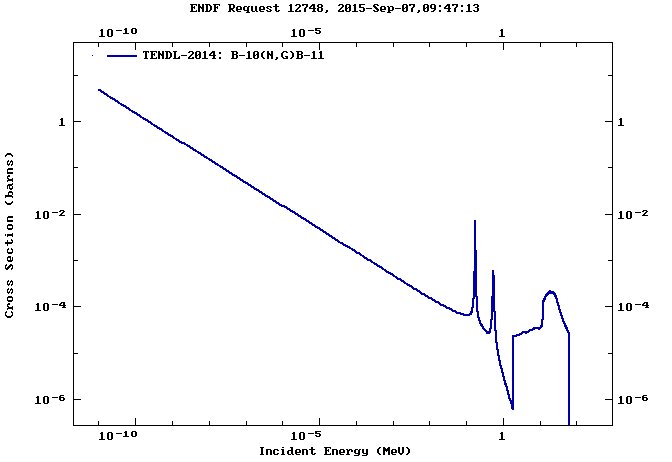 Following the previous interactions the neutrons need to thermalize from fast range to thermal range which requires them to undergo maybe several centimeters of a material made up of a mix of Be and B like the one considered here. We will assume that the geometry here is such that this process is maximized.

As mentioned, $^{12}B$ will decay 100% of the time via beta decay, and the $T_{1/2}$ for this decay is about $20ms$. Also for the beta decay, most of the energy escapes with the neutrino because of its low interaction, and only the energy fraction of the beta particle will effectively be used most of the time. But in this case the beta decay can occur leaving the $^{12}C$ in some of its excited states, which means that the gamma from the subsequent decay can also be used as produced energy, but this is 3% of the cases so we will consider that only the electron energy counts as produced energy. 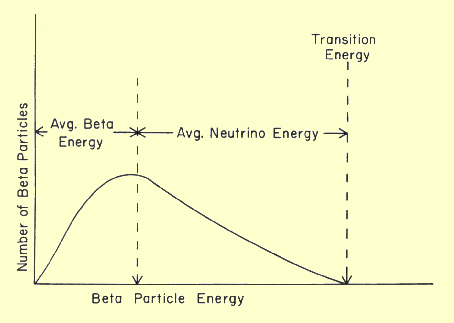 Now if we see the figure for a generic beta spectrum above (taken from here), we can see that in average the beta particle takes about a third of the total energy, which in this case would be about $4MeV$, so this is the value we will be using for our considerations.

Now that we have cleared our considerations, we can estimate the actual energy balance accounting for cross sections and time relations. We are going to consider a cylindrical volume of cross section equal to the beam's and of unitary length $d$. We can write the Power balance or energetic balance as follows: $$P_{net} = \sum P_k - P_{acc}$$ Where $P_acc = \eta * E_\alpha * I$ is the power used by the accelerator which depends on the intensity of the beam $I=2I_N$ where $I_N$ is the number of $\alpha$ particles per second coming from the accelerator beam.

Here $\eta=P_{acc}/P_{beam}$ gives relation between the power used by the reactor to power of the beam, and which we can estimate to be 10 based on this.

The power released on the first reaction can be calculated as $P_1 = E_1 * R_1$ where $R_1$ is the reaction rate for stage one which can be calculated with the macroscopic cross section $R_1 = \phi_1 * d * \Sigma_1 = I_N * d * \sigma_1 \rho_{(^{9}Be)}$ being $\phi_1$ the flux of alpha particles coming from the beam $I_N$, and $\rho_{(^{9}Be)}$ is the density of $^{9}Be$ atoms in the material. Now $E_1$ is the total energy produced per reaction in this stage, which mainly comes from the energy lost by expelled neutrons by moderation and the gammas of the $^{12}C$ produced here in excited state. This is not clear because while most neutrons will be absorbed after they have lost around $1-10 MeV$ of energy to the medium, some neutrons can be absorbed without losing that much energy, but will create excited $^{12}B$ excited nuclei which will eventually radiate gammas to the medium. So let us assume here $E_1 = 14 MeV$ and not consider in the next stage any energy contribution from these neutrons.

Equally for the stage 2 we can estimate the power in the same way. Now $R_2 = \phi_2 d \sigma_2 \rho_{(^{11}B)}$ and the energy release here we will consider to only be the difference in mass between the reacting nuclei and the product which is approximately $E_2=2.5MeV$. We will consider here $\phi_2=\phi_1$ which implies in ideal geometrical arrangement of the reactor as we mentioned and is coherent with the considerations done below.

This is a fast portion of the process as well as the previous one, and we considered the moderation of neutrons fast enough as well, so we will consider these previous stages to occur immediately following one another and in a time scale only dominated by the delay of neutron moderation process, which let's assume that takes less than $10^{-4} s$.

So putting all the above terms together we get:

this relation can be normalized to $I_N$, and it depends on the balance of Be atoms and B atoms we have on the material, which is a matter of design. Let us choose them according to the cross sections in the way:

Using the mentioned values above, and remembering that $1eV = 1.6*10^{-19}J$ we get here a positive balance of about $400kJ$ per $\alpha$ particle, which here means that almost twice the energy used is being produced. Of course there is some start up energy which has not being considered, but for a reactor working for sufficient time this energy can be recovered.

Of course this situation would never be the case in reality, here several ideal considerations have been made. In my opinion the strongest considerations are related to the geometrical arrangement and that $\phi_1 = \phi_2$, which is actually very dependent on how the geometry will be. Also the fact that all neutrons and gammas deposit all their energy inside the reactor is a strong consideration. Still I think that they do not rule out the possibility for building this type of reactor, so either the system has not been studied and there is a possibility, or it has been studied and other technical difficulties have been found, like for example how factible is obtaining beryllium in nature, which is not that common compared to other materials.

Not the answer you're looking for? Browse other questions tagged nuclear-engineering accelerator-physics particle-accelerators or ask your own question.

6
Why can't we harness the energy from neutron + protium = deuteron reaction?