Consider the following setup:
A beam of deuterons is accelerated towards a lead target. With sufficient acceleration (in the MeV range, nothing fancy...), I would expect some of the deuterons to fuse with the lead nuclei, producing bismuth, polonium, and astatine.

Looking at the table of nuclides, we see that these fusion reactions quickly reach a wall of very strongly radioactive isotopes. These are mostly $\alpha$ radiators, and those which are $\beta$ radiators decay into isotopes that will eventually reach the $\alpha$ radiators, assuming continued bombardment with deuterons.

So, in effect, this setup would input $\rm^2H$ ions, and output $\rm^4He$ ions (plus some $\rm^1H$ and $\rm^1n$ debris from not fully fused deuterons, I guess). This is nuclear fusion, catalyzed by the lead nuclei.

Comparing the lead target to a hydrogen target (beam of ions, gaseous target, paraffin wax, whatever), we see that the projectile ions lose much less energy when they scatter elastically off a lead nucleus than when they scatter off another proton. Simply because the lead nuclei are so much heavier. As such, each deuteron that's fired on a lead target will have several attempts at fusion before it has lost too much energy to allow interaction. As such, the cross section for the eventual $\rm2\ ^2H\rightarrow{}^4He$ reaction should be much larger for the lead target than for the hydrogen target.

Unfortunately, I was not able to find any previous work on this idea.

My question is: Has any research been done to measure the involved cross sections?

where $\rm T$ is some relatively stable isotope of Pb, Bi, and Po. I guess that the first reaction will be the most important, and that the escaping proton will carry away most of the fusion energy, enabling it to further react with target nuclei. So I'm also interested in the reaction:

When I need cross sections, I use the Evaluated Nuclear Data File. I find lots of data for protons on lead. However, the data library for incident deuterons seems to only include low-mass targets. The open-access 2018 ENDF reference paper might describe the rationale behind these decisions, but I haven't read it carefully. My guess is that the literature on heavy-beam cross-sections doesn't systematically cover all energies. You have some detective work to do if you want to know more.

So that's a partial answer to your bolded question about cross-sections. However, your lead-catalyzed fusion idea has other problems that will prevent it from ever generating net positive power.

Let's skip the lead part and suppose that you start with a pure bismuth target. Furthermore, let's consider the "fairyland" reaction chain where your deuteron beam transfers a proton to one bismuth nucleus, and the remaining neutron gets moderated by the medium and captured by a different bismuth nucleus. The reaction chain is

I call this the "fairyland" reaction chain because it has a number of problematic issues, not least of which is that it's exceedingly unlikely that you would productively use both of the nucleons in your incident deuteron.

The total energy released in this chain is $Q_\text{fairyland} = Q_1 + Q_2 + 2Q_3 \approx\rm20\,MeV$. (I computed $Q$-values using the tabulated mass excesses.) Suppose for the sake of argument that you're able to drive this chain using a $\rm1\,MeV$ beam (which seems unlikely, since nucleon separation energies are typically 5-10 MeV). Then we come out ahead only if the fraction of the beam that undergoes this fairyland process is more than $\rm(1\,MeV/20\,MeV) = 5\%$. That seems ... improbable. If the fairyland process is more efficient with a 10 MeV beam, then you need 50% efficiency to come out ahead energetically, which is just silly. And those minimum estimates assume no other inefficiencies in producing your beam or extracting your heat, and neglect e.g. the delay of a few hundred days of continuous beamtime before your polonium concentration reaches secular equilibrium with the rest of the target.

You suggest starting with a lead target, and thinking of this process as catalyzed deuteron-deuteron fusion. The stable lead isotopes are 204, 206, 207, 208. (Lead-205 is stable from a practical point of view, with lifetime 20 My, but not from a geological point of view.) Single-nucleon transfer reactions on the lightweight lead isotopes make either a heavier stable lead isotope or a bismuth which decays to lead by electron capture. So with a lead target, you wouldn't be able to access the fairyland reaction chain above until you had converted a chemically significant fraction of the target to bismuth. Figuring out how much time this would take using a 1 MeV beam with a thermal power that wouldn't vaporize the lead is a cute little homework problem; it's longer than a person's career, even with optimistic assumptions.

In a comment you compare this to the CNO cycle in stars. That process has similar issues. It doesn't occur in our Sun, because the average temperature in the core isn't high enough. In fact, solar fusion is a pretty inefficient process overall. The power density in the Sun's core is only about $\rm100\,W/m^3$, which you could replicate in your house using a grid of incandescent light bulbs. Stars get away with being inefficient by also being enormous.

There's some overlap between your catalyzed-fusion idea and this other question.

After thinking about it some more, here's an estimate of the relative cross sections for these processes that's based on more than a gut feeling. It doesn't 100% match up with the assumptions above, but it'll give you a feeling.

(Unfortunately one of the references that I was looking for is temporarily offline due the current US federal government shutdown, so this is a little more ad-hoc than I'd like.)

Here's a Rutherford scattering calculator, for computing the scattering due to the long-distance electromagnetic interaction between the projectile and the nucleus. The Rutherford cross section diverges at forward angles, because "no deflection" is the mostly likely outcome of a charged particle passing through a thin foil. Picking a 10 MeV beam with charge $Z=1$, the cross section for scattering more than $20^\circ$ from a bismuth nucleus is about 40 barns. If your target were a one-micron foil (so that we don't have to worry about multiple scattering) then about $10^{-4}$ of your beam would scatter at this angle or more, so an order-of-magnitude estimate for scattering of the entire beam would be about a centimeter.

Here's a plot from the ENDF of the cross section for (p, anything) on a bismuth target. (I think. Sometimes I discover after the fact that the ENDF hasn't done what I want.) 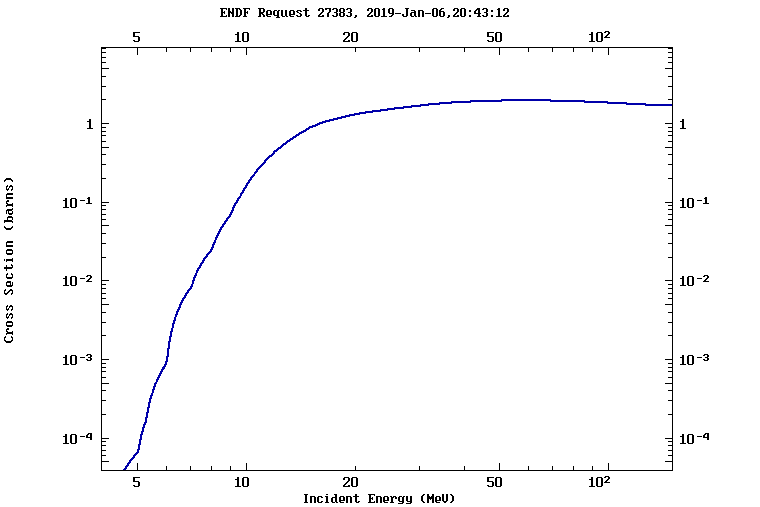 That's probably a good order-of-magnitude proxy for (d,p) or (d,n), in that it levels off around a couple of barns. Unfortunately that's nowhere near the 50% of the Rutherford cross section that we decided above we would need to come out ahead with a 10 MeV beam and our deeply problematic "fairyland" process. Furthermore we're on the wrong side of the "corner" in the cross section at around 15 MeV, below which it falls precipitously. I read about 0.2 barn at from the plot for (p, anything) on bismuth at 10 MeV, but the curve is steep and the reactions we actually care about are different, so I wouldn't take that too seriously.

There are a bunch of hand-waving problems with my analysis here, and several places where I look at the things I've written and think "but what about..." However, fixing those issues at this point starts to get into the territory of including the cross-section data in some kind of simulation of the beam and target, which is more work that I'm willing to expend. I wish you good luck with it. 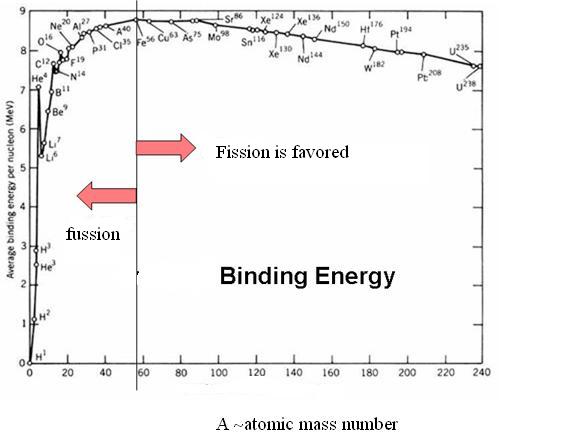 The normal way of talking , for example slow neutrons on Uranium, it is not called fusion, but fission.

The energy released is in the difference of the binding energy per nucleon,of the original nucleus with the product neuclei, with a small energy input of a neutron.

So, in effect, this setup would input $^2H$ ions, and output $^4He$ ions (plus some $^1H$ and $^1N$ debris from not fully fused Deuterons, I guess). This is nuclear fusion, catalyzed by the lead nuclei.

If you start with lead and end with lead there is no binding energy per nucleon released.

Count the energy: A helium atom has 4 nucleons, where does the extra mass come from if not from the energy of the incoming $^2H$ ?. So there is not a gain in energy, to be called either fusion or fission.

Please note that energy balances for nuclear reactions are not statistical, indvidual nuclei have to interact, in the example with uranium above, an individual neutron has to hit an individual uranium for the reaction to happen. Energy has to be balanced for each individual interaction.

Not the answer you're looking for? Browse other questions tagged nuclear-physics fusion accelerator-physics or ask your own question.

6
Why can't we harness the energy from neutron + protium = deuteron reaction?
0
What are physical obstacles for rare earth metal synthesis in nuclear reactors in industrial scale?

15
Where does the energy produced by fusion come from?
5
What types of fusion reactions happened in population III stars?
1
p+n reaction in nuclear fission reactors
2
Would $^3_2\mathrm{He}$ and $^3_1\mathrm{H}$-based fusion require different fusion reactors?
3
Has a nuclear “neutron halo” been measured directly? Anything other than “breaks easily”?
1
Logic behind Coulomb explosion fusion?