What makes a nucleus unstable?

My question is simply that - what makes a nucleus unstable? What exactly causes a nucleus to start breaking apart in the first place? Is it the Coulomb force between the neighboring protons?

It is instructive to look at chart of isotopes , 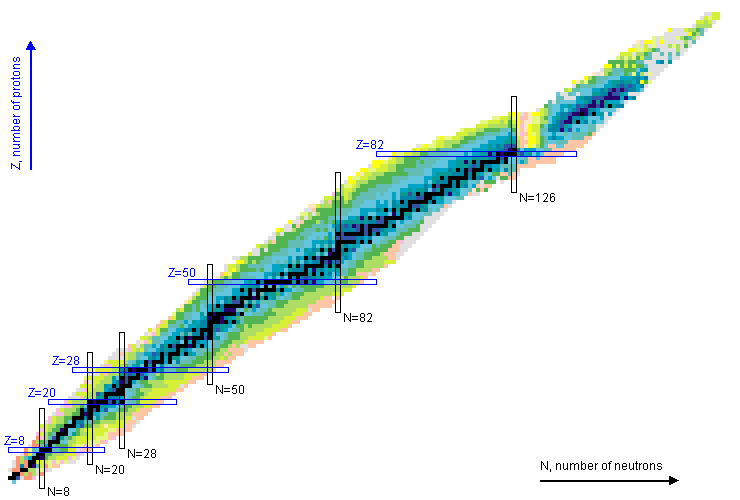 number of neutrons on the x axis and protons on the y. The stable (black) isotopes diverge from the diagonal, more neutrons are needed to neutralize the coulomb repulsion of the protons, for stability.

The main forces are the coulomb force (repulsive) and the strong force (attractive) , but the specific energy levels will depend on quantum numbers . If there are too many neutrons, there exists a probability for the neutron decay to express itself , if too many protons a positron emission will bring the balance.

Instability means that there are lower energy levels in the collective nuclear potential of the specific number of protons and neutrons to which the system will stabilize. The decay time can take from centuries to nanoseconds depending on the probability of decay for the given system. A number of models have been developed to explain the specific behavior.

Even if the the strong nuclear force is the most powerful force over subatomic distances. The electrostatic force is almost always significant, and, in the case of beta decay (which also involves a transformation of a proton into a neutron), the weak nuclear force is also involved. But the basic answer is yes, you cannot two protons together (Helium 2 doesnt exist, at least in a stable form), you need neutrons to compensate and add more strong force to avoid the electrostatic repulsion. Even if the strong force is stronger, it acts over very short distances, that is why elctrostatic repulsion wins sometimes, specially on large nuclei whare the strong force of a proton on the core has little influence on a proton on the external shell, but the lectrostatic force, is still strong as it decays slowly with distance remember that the range of the strong force is limited to distances on the order of a few $10^{-15}$ meters)

Not the answer you're looking for? Browse other questions tagged electromagnetism nuclear-physics coulombs-law binding-energy strong-force or ask your own question.

15
Protons' repulsion within a nucleus
13
What do we know about the interactions between the protons and neutrons in a nucleus?

15
Protons' repulsion within a nucleus
13
What do we know about the interactions between the protons and neutrons in a nucleus?
6
Radioactive decay - What mechanism decides when an unstable nucleus decays?
10
Why are heavier nuclei unstable?
1
How protons come near to during the formation of a nucleus?