Can we show that the "Carnot cycle is the most efficient cycle in ideal gas" without using any form of the Second Law?

Is it possible to show that the Carnot cycle is the most efficient cycle in an ideal gas without using any form of the Second Law of Thermodynamics? Also. If this is possible, how can we prove it?

Gases may be limited to ideal gases. In the general cyclic process, the work done by the engine during one cycle is supposed to correspond to the area enclosed by the loop. But how can we estimate the amount of heat that has entered the general cycle? It also does not seem clear what the low and high temperature heat sources are for the general cycle.

I understand that if I were to draw a loop on a PV diagram, even if it were mathematically more efficient than the Carnot cycle, it would of course not be possible if it violated the second law.

In other words, my question is whether such a "non-physical loop" can mathematically exist. Of course, no matter how mathematical my question is, I do not allow P and V to be negative; P and V shall be positive.

These quantities are much easier to see on a $TS$ diagram (a temperature-entropy diagram) than on a $PV$ diagram. Hopefully it should be obvious that the any closed cycle which returns to its original state will also form a closed loop in the $TS$ plane. 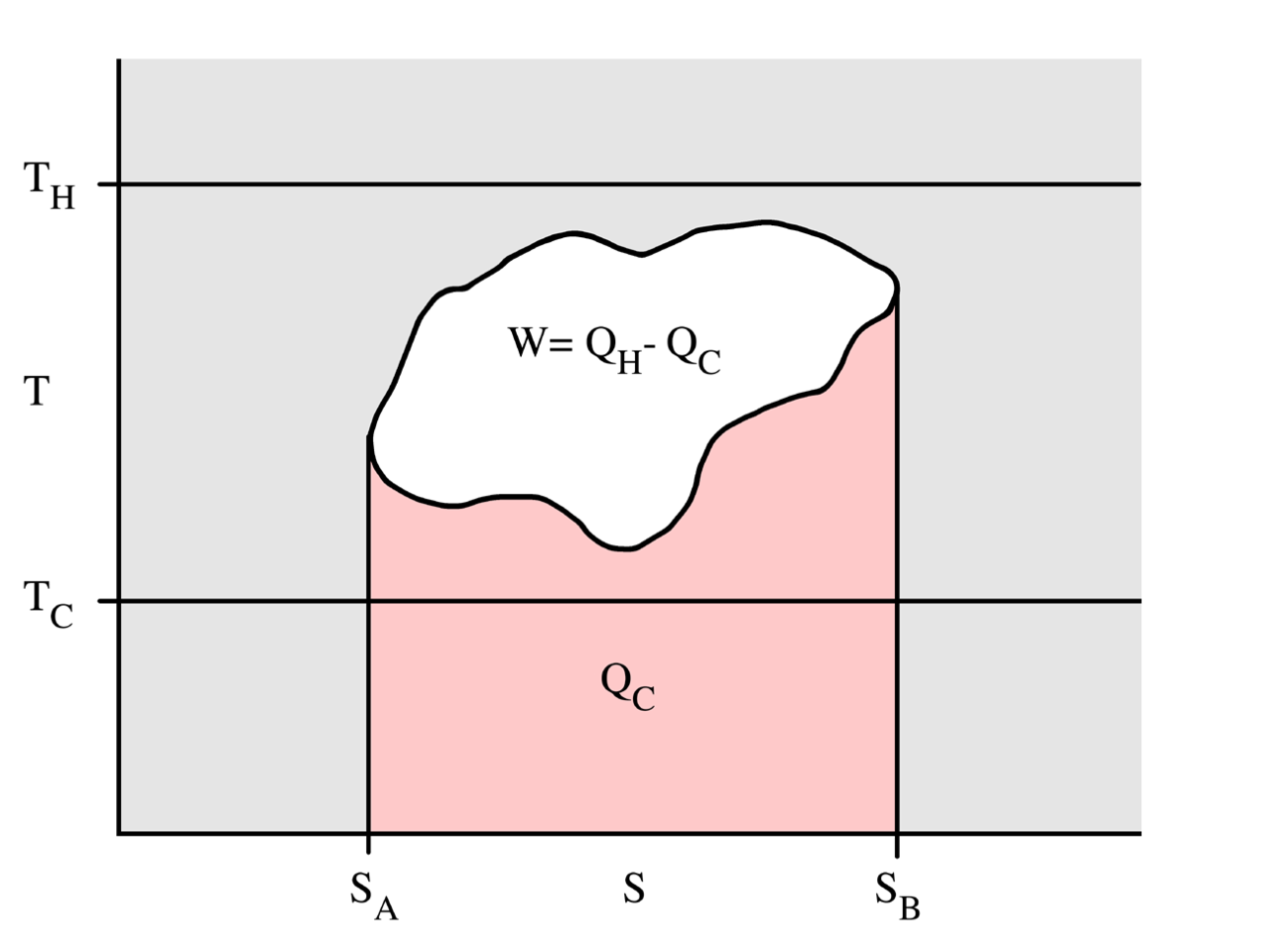 By Eric_DUMINIL at English Wikipedia

To interpret this, note that:

Well, the most efficient loop will be the one for which the least heat is wasted, i.e., the one for which $Q_C$ is smallest when expressed as a fraction of $Q_H$. This implies that we want a loop that makes $Q_H$ as big as possible while making $Q_C$ as small as possible. In other words, the top part of the loop should be as far up as possible, while the bottom part should be as low down as possible. This implies that the top part of the curve should be an isothermal process at $T_H$ from $S_A$ to $S_B$, while the bottom part should an isothermal process at $T_C$ from $S_B$ to $S_A$. These two processes are connected by isentropic processes at $S_A$ & $S_B$, forming a rectangle in the $TS$ plane. This exactly describes the Carnot Cycle.

Not the answer you're looking for? Browse other questions tagged thermodynamics ideal-gas carnot-cycle or ask your own question.

3
Does negative temperature in Carnot cycle yield a counterexample of the second law of thermodynamics?
2
Questions on Carnot's theorem
1
Proof of a Carnot engine being the most efficient heat engine
2
optimality of the Carnot cycle
0
Carnot Theorem applies only to Carnot cycle?
0
Can the Efficiency of an Arbitrary Reversible Cycle be Equal to the Efficiency of the Enclosing Carnot Cycle?
0
Deriving $Q_{1}-Q_{2}=W$ for a perfect gas that had gone through a Carnot cycle
3
Why can Carnot efficiency only be 100% at absolute zero?