optimality of the Carnot cycle

It is well-known and is stated always and everywhere that the Carnot cycle is the most efficient thermodynamic cycle. Although stated as such it is rarely proven. One proof is in the article "Engine Efficiencies and the Second Law of Thermodynamics", (AMERICAN JOURNAL OF PHYSICS VOLUME 37, NUMBER 11 NOVEMBER 1969), Tobin proves that among all engines performing a cycle, so that the engine returns to its starting state, the Carnot cycle is the most efficient where efficiency is defined as $\epsilon= 1-\frac{Q_{rejected}}{Q_{absorbed}}$, and the Carnot cycle is defined as one consisting of an isothermal-adiabatic-isothermal-adiabatic segment. The proof assumes the Clausius equality, that is in a reversible cycle $\oint \frac{\delta Q}{T} = 0$.
Then using the geometry of the picture below a simple argument over the areas enclosed in the cycles IABCDJI vs. IAEFGDJI (heat absorbed) or IJDAI vs. GHEAIJDG (heat rejected) will show that any other cycle working between the same temperature limits such as EFGHE will have lower efficiency than the Carnot cycle ABCDA.

But this proof assumes tacitly that pieces EFG and GHE are such that $dS>0$ and $dS<0$, respectively.
Here I am thinking of a nasty cycle such as shown in the next figure in red where the cycle cannot be neatly separated into two and only two monotonic parts having $dS>0$ or $dS<0$. There is no obvious reason why that restriction should hold in general. Clearly this monotonicity should hold if the engine has only temperature as its independent "force" but if the engine's state needs more than one independent force variable than the situation is more complicated. Instead it is reasonable to assume that any physical cycle should have finite number of monotonic pieces, kind of a "thermodynamic Dirichlet condition" but it could also have self intersections, little loops, and other ugly features when projected on the TS plane.

How would then one prove the optimality of a Carnot cycle? Or ugly cycles on the ST plane are non-physical even if there are more than one thermodynamic variables? 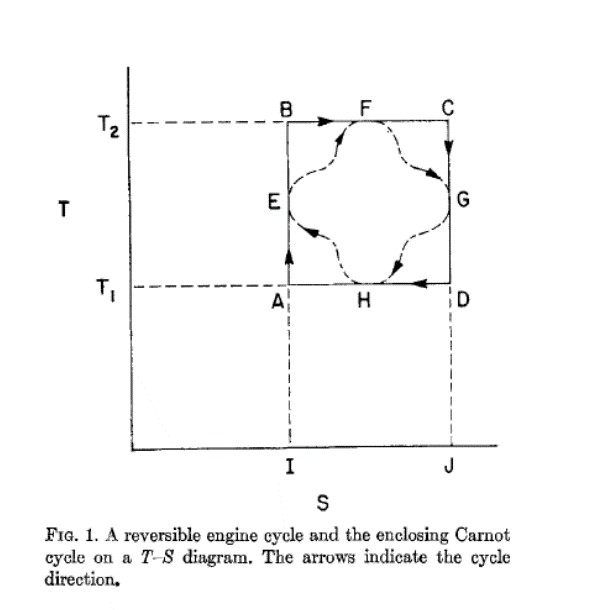 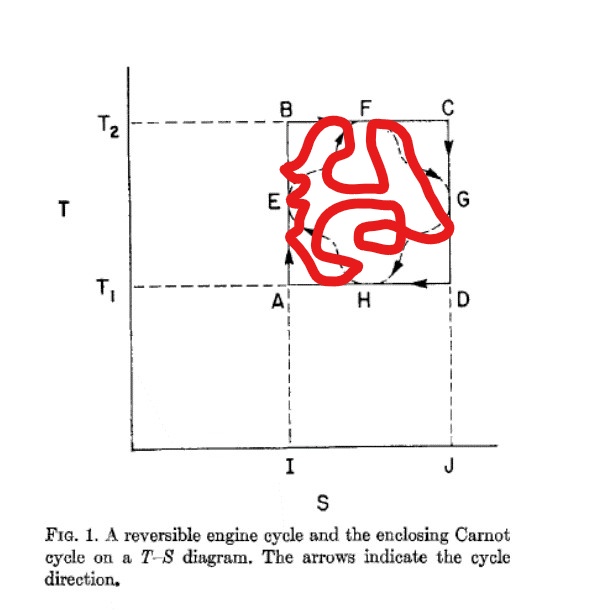 I'm not sure why you say that Carnot's theorem is "rarely proven". Such proofs are given as a matter of course in any undergraduate textbook on classical thermodynamics, and lots and lots of places on the web. The Wikipedia article on the subject should be sufficient.

P.S.: I just remembered that I believe Truesdell also has a very rigorous treatment in his Rational Thermodynamics, if you have the stomach for that one...