Why is there a potential difference? 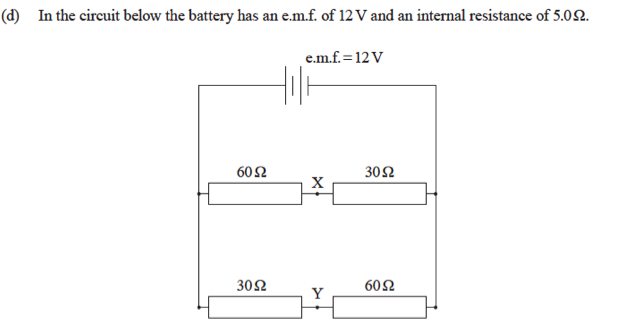 The question then asks for the potential difference between $X$ and $Y$, which is claimed to be $3.6\text{ volts}%$.

Why would there be a potential difference in this case? If I connect a lightbulb on $X$, and another on $Y$, it seems very obvious that the brightness would be the same.

Or is the standard direction of current important? So the current "encounters" the 60 ohm "first" when flowing to $X$, and the 30 ohm "second" when flowing to $Y$? That seems a little crackpot to me. So if we change the resistor to the left of $X$ to 100 ohms, and the resistor to the right of $Y$ to be 0 ohms, the differing definitions of current flow would actually cause a difference in measurement of potential?!?!

The correct answer is worded:

Consider solving the circuit using conventional current. There is a larger voltage drop across the 60 ohm resistor in the top branch than the 30 ohm resistor in the bottom branch, causing the voltage at X to be lower than Y. Notice how we considered only the first resistor encountered.

While switching between conventional/electron for the entire circuit does not make a difference, doing so only for one branch (i.e. letting the first resistor encountered by current be 30 ohms for both branches) does modify the circuit.

Actually, what seems very obvious won't be the case, try lighting the light bulb. That was an experiment. Here's what's happening in theory.

The answer is Yes, since Electric Field that is setup in the wire has a direction, current has a direction and yeah..the Potential Energy associated with the current will drop for 60 ohm first and 30 ohm later for first resistance and in reverse for the second resistance.

So, yeah. Direction does matter.

This is a nice diagram from University Physics which makes the concept of Potential fall clear. 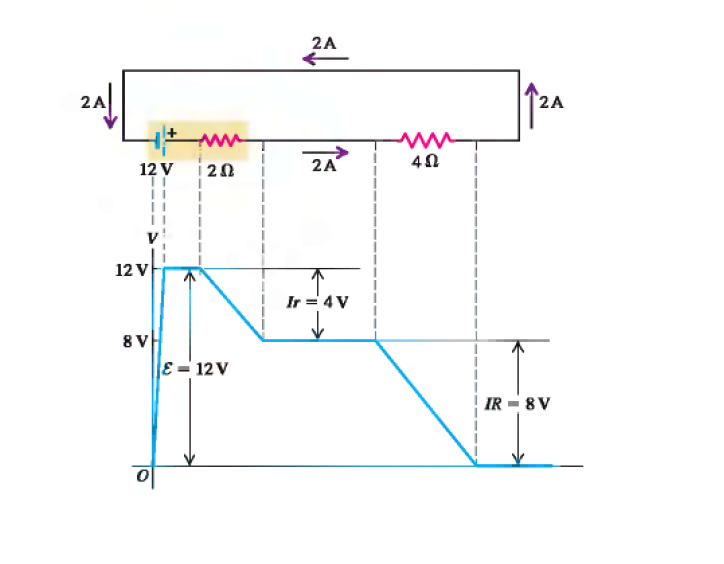 You are correct about inserting lightbulbs at X and Y. The same current flows through each branch, so the lightbulbs will be equally bright.

However, the question is not whether there is a difference in the currents flowing through X and Y, but whether, if you connect a wire between them, any current will flow through it.

Your objection, of course, will be that if the currents through X and Y are the same, there is no reason why any current should flow either way when they are connected.

In the spirit of KDN's answer (which I applaud), think of the currents through X and Y as two identical parallel rivers flowing down a 90m hill from the LHS (top)and the RHS (bottom) of the battery, carrying the same volume per second. The route through X is initially steep and drops 60 m, whereas the route through Y is initially shallow and drops only 30m. If we opened a channel between X and Y, would any water flow between them? Of course - because X is 30m below Y, and we naturally expect water to flow downhill.

It is not the rate at which water flows through X and Y (the current) which matters but whether there is a difference in height (potential) between them.

If we switched the battery so that the top of the hill was on the RHS and the bottom on the LHS, this would reverse the direction of current flow. Now the route through X is initially shallow while that through Y is initially steep. So Y is below X and this time current would flow from X to Y.

Not the answer you're looking for? Browse other questions tagged homework-and-exercises electricity electric-circuits voltage or ask your own question.

0
How do voltage and voltage drops over a circuit relate to work done?
0
Potential Difference across resistors
2
For a real battery, why is two identical bulbs in parrallel slightly more dim than just one in series
0
How is current affected by a charging capacitor in parallel to a resistor?
3
Why is there no current flowing across the battery
0
Is there any way to get a different current (apart from $\frac{V}{R}$) across a resistor with a specified potential difference between it?
0
Confusion regarding current and resistance in series circuit