Why is the normal contact force horizontal on an inclined ladder? 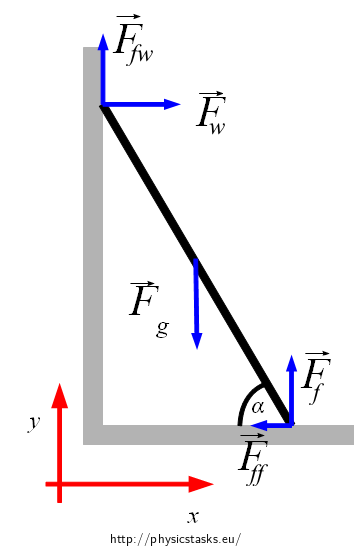 Think about how a ladder stands up in real life. Would the ladder stay in the orientation shown in your image if the ground were ice? No! The reason? Friction.

The friction force, represented by $\vec{F}_{ff}$ in the figure acts to prevent the ladder from sliding to the right.

There are actually 5 forces acting on this ladder:

I feel like there is something missing in this diagram, which is torque. In reality, there is a torque on the ladder, due to gravity, which causes it to want to rotate counterclockwise around the point where it touches the floor. This torque is "responsible" in some sense for the force of the top of the ladder against the wall (and the counterbalancing force of the foot of the ladder against the floor's friction.)

I don't see any torques in your free body diagram, although I do see an angle "alpha" at the base of the ladder, which is suggestive that maybe there should be some. If you haven't covered torque yet, this is not a great problem to try to work through.

To answer that question note that any force can be resolved into mutually perpendicular components. Therefore $F_g$ can be resolved into two components, one acting down and parallel to the ladder, $F_{g}sinα$, and one perpendicular to the ladder, $F_{g}cosα$. At the base of the ladder, this force down and parallel to the ladder has a vertical downward component acting on the ground and a horizontal component acting on the ground to the right. Per Newton's third law these forces have equal and opposite reaction forces as shown in the free body diagram of the ladder at the base. One of those is the horizontal friction force acting to the left. For equilibrium you then need a horizontal reaction force on the wall for the sum of the horizontal forces on the ladder to be zero.

All of the above is intended only to explain the reason for a normal reaction force at the wall. Given that you now have 4 unknown reaction forces and one known force, $F_g$. So solve for the 4 unknowns, you need 4 equations. From here you should be able to identify the needed equations if you realize that the sum of the moments where the ladder contacts the ground and the wall have to be zero for equilibrium.

Since the ladder can slip downwards at the top, the only possible direction for the normal force is horizontally.

You can think of normal forces as enforcers of a specific constraint. In this case the ladder cannot interpenetrate through the wall. So a force that resist pushing into the wall must be perpendicular to the wall.

Normal forces act perpendicular to the surface in contact. The force acting in the ladder is actually somewhere in between the horizontal and vertical forces shown. Those are just the components of the normal force.

Actually if you see the diagram , body is in rotational inertia, and rod is not perfectly vertical or horizontal, thing which work here is frictional force between rod and surfaces, friction always try to maintain the inertia, here the friction which acts is static friction.

Not the answer you're looking for? Browse other questions tagged newtonian-mechanics forces friction free-body-diagram statics or ask your own question.

0
Will the normal force will be different if there is different area of contact?
1
Static equilibrium - Ladder against a wall, how far can person ascend
1
If I hold a ladder at an incline to a frictionless surface and then release it, will it slide?
1
Why does normal force work?
1
The reaction force of a normal force
0
What is the reaction force of the normal force when I push a wall?
1
Which force component is $F_{N3}$ on figure (2)?
2
Why is there no normal force acting at this pillar?
1
Why does Friction not accelerate the body in this case?
2
Doubts about direction of normal contact force acting on a tilted rod supported by another body