How can I measure some forces in this experiment…? (statics)

Math and statics weakling here trying to do some... math and statics. I have an experiment where I'm trying to measure forces along 2 axes. I currently have a setup that I think might give me the data I need to derive these values, but I'm not entirely confident it's possible nor do I know how to do so. I've also devised of a variant which makes more sense to me but I want to avoid unnecessary work for obvious reasons. 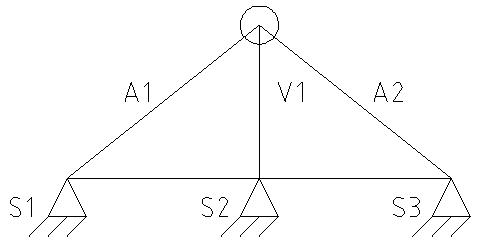 S1 through S3 are kitchen scales, the circle at the top is where the external vertical (down) and horizontal forces are applied, V1 is the vertical member of the experiment and it's attached to a horizontal base which is set on top of the scales. A1 & A2 don't physically exist, but I added them in the drawing as I suspect they'll be required in some explanations. My current setup just uses S1 and S3, and their distances to the vertical member are unequal. So I guess my first question is: does this configuration provide sufficient data to derive the two forces, and if so then how?

If not, then would adding the 3rd scale directly beneath V1 do so? If I'm not mistaking, the vertical force is the sum of the forces read by the scales minus the difference between S1 and S3. The horizontal forces being based on the law of the lever where S2 is the fulcrum and the difference between S1 and S3. Is that correct? This is somewhat warping my mind because in actuality I was considering ripping out the load cells from the scales with two of them from each scale being placed at S2, with the remaining load cells from one the scales placed at S1, and the remaining scale's load cells placed at S3 therefore if I went that route I'd have only 2 readings rather than 3. In which case vertical force would be the sum of the values minus their difference, and the horizontal force would follow the lever law and their difference.... I think. Maybe.

This is all assuming the rest mass of the setup has been nulled by using the tare function on the scales. I'd also like to note that the center of mass is offset from the vertical member and is pretty close to the horizontal base, but I don't think that matters. Correct? Also, the setup is fairly stiff and the physical deflections are negligible.

Using your suggestion (from a comment) about affixing the frame to one of the scales to prevent sliding horizontally, then it is theoretically possible to determine the horizontal and vertical forces. This is possible if the horizontal force is located at some distance above the scales (H).

The first equation gives the vertical force directly (just S1+S3). The second equation can be solved for Fh to give the horizontal force: $$Fh=\frac{d2*Fv-(d1+d2)*S1}{H}$$

My only concern is whether the horizontal force on the scale is interfering with the measurement of the vertical force. You should do some tests to confirm if that is a problem or not. 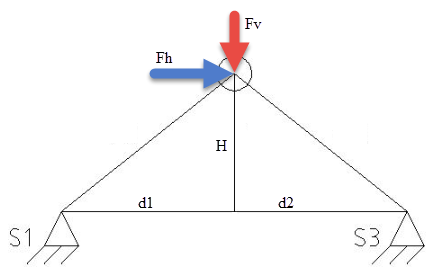 Not the answer you're looking for? Browse other questions tagged forces free-body-diagram statics or ask your own question.

1
Solving a Statically Indeterminate Truss with Energy Equations (Tricky)
1
How to find static friction coefficient and the applied force's angle of inclination with a horizontal plane?
0
Force needed to lift a hinged slab/lever?
1
Three hinged rods problem
0
The direction of forces in statics problem
0
Confused about forces acting in this simple statics problem
0
Why does the load cause a moment around the support point in column buckling?