How does the graph of molar heat capacity point towards quantization of motion? 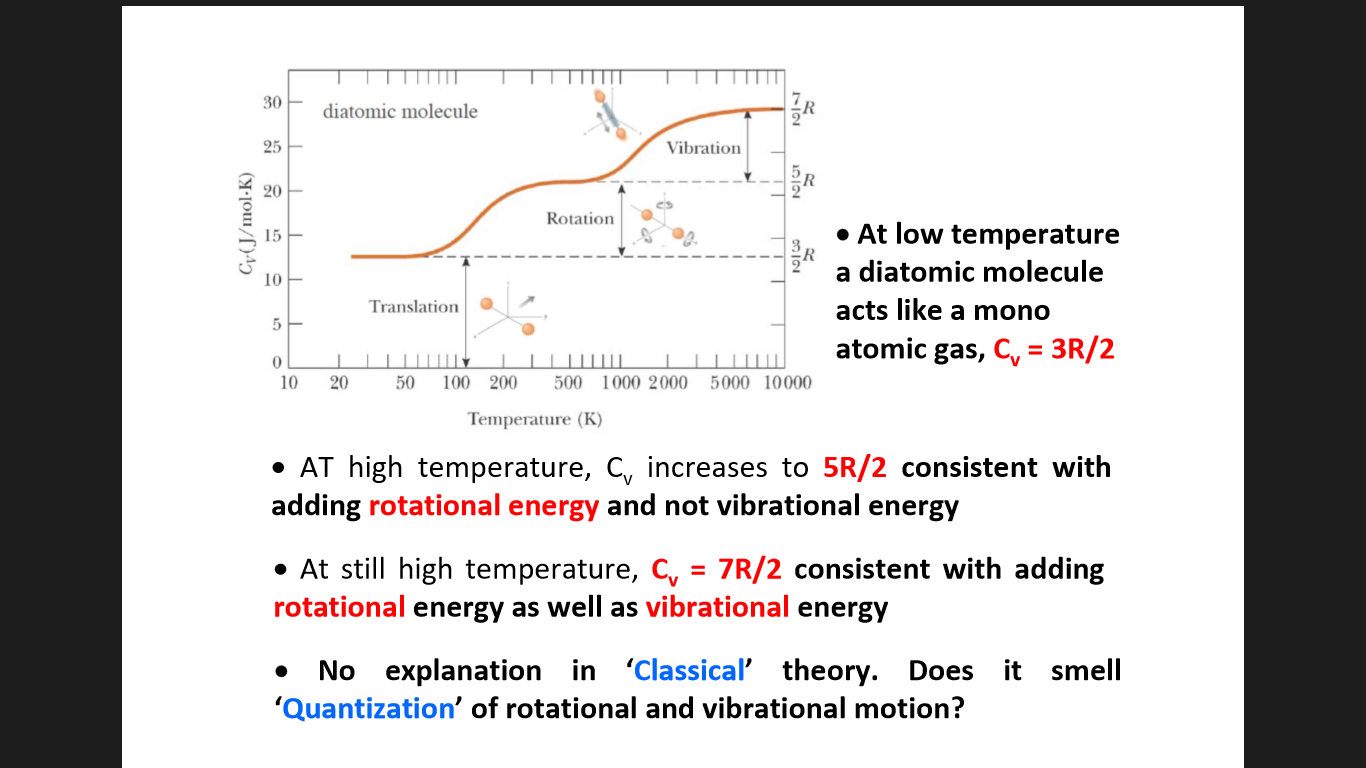 In the graph below, if we consider that the jumps are stepwise for a molecule, even then, how does it point toward quantization of vibrational and rotational motion? 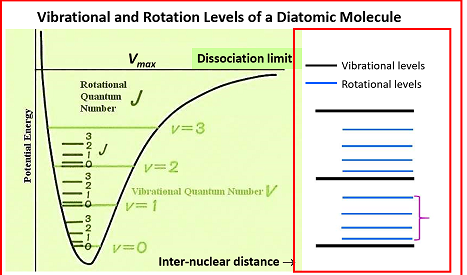 In my last question, Classical theory fails to explain quantization of motions? I confused energy with the heat capacity.

There's actually a lot to potentially discuss here - let's go through it carefully.

Because of quantum effects, as you've shown in your bottom figure, there are discrete rotational and vibrational energy levels that a molecule may occupy. The vibrational levels are split further apart than the rotational levels. There are in fact also discrete translational energy levels as well, but these are so close together that they are generally ignored, even at low temperatures.

At a very low temperature, most molecules in the system can only occupy the lowest energy state, because they do not have enough energy to climb the ladder. This state is $J=0,v=0$, where these are the rotational and vibrational quantum numbers.

From thermodynamics, we know that the molecules will always try to arrange themselves such that they follow a Boltzmann-like distribution over the energy states, i.e. the number of molecules occupying, say, one of the rotational energy states will be proportional to the Boltzmann factor, $$B=\exp\left(-\frac{E}{k_\text{B}T}\right)$$ where $E$ is the energy of the state in question, $k_\text{B}$ is the Boltzmann constant and $T$ is the temperature. Note two things about this function. Firstly, if the energy is large (i.e. if we consider a higher up energy state) then $B$ will decrease - in other words the proportion of molecules occupying that energy state drops with increasing energy. Secondly, if $T$ increases, then $B$ also increases, but note it will never be larger than lower energy states - the molecules occupy the levels in a sort of "pyramid"-like occupation scheme. 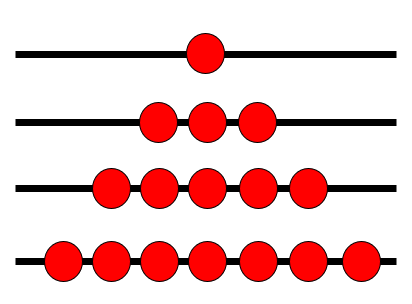 Side note: the reason the Boltzmann distribution is favoured is because this minimises the total entropy of the system - any further rearrangement of the molecules would either increase the energy or increase the entropy.

Starting at very low temperatures, most molecules are in the $J=0,v=0$ state. As the temperature is slowly increased, the molecules may only climb the translational energy ladder, where the levels are so close, we ignore quantum effects and can just say the increase in internal energy is linearly proportional to $T$ (this is the equipartition theorem, which comes from thermodynamics). This gives the first linear increase in total energy, and thus a flat line in heat capacity $\left(C_V=\frac{\text{d}U}{\text{d}T}\right)$.

As the temperature rises, the molecules begin to fill up rotational energy levels, but most still stay in the lowest vibrational energy level, because there isn't yet enough energy for them to reach the $v>0$ states. The energy curve will now rise with a steeper gradient than before, because new energy states can be filled faster. However, the temperature is not yet large enough for the rotational energy levels to seem as though they are "close together", and so the internal energy in fact rises in a non-linear fashion, and the heat capacity curve rises non-linearly. Only when $k_\text{B}T>>\Delta E$, where $\Delta E$ is the spacing of energy levels, can we say that the levels are approximately continuous (like the translational levels), and we re-enter the linear regime, only this time there are more degrees of freedom (hence $5RT/2$ rather than $3RT/2$ in the energy).

Fianally, the same thing occurs with the vibrational energy levels at even higher temperatures, though experimentally many diatomic gases dissociate before they reach these temperatures.

So to answer your question "How does the graph of molar heat capacity point towards quantization of motion?", the fact that the heat capacity curve is not just one nice flat line suggesting a linear relationship between energy and temperature (which would be the case if the rotational and vibrational energy levels were just a continuous "mesh" of states) suggests that there are discrete energy levels, between which there are gaps which need a certain temperature before they can be overcome.