What is the cause of this 'bump' in the heat capacity graph for a monatomic ideal gas?

I am trying to understand the heat capacity behaviour for an ideal gas as a function of temperature. The text I am learning from is Schroeder's An Introduction to Thermal Physics. This is an exercise from an old laboratory manual for an introductory statistical mechanics course.

I have written some code in MATLAB to compute the partition function, average energy and heat capacity as a function of temperature using:

The output is a graph that looks like this (excuse the bad quality): 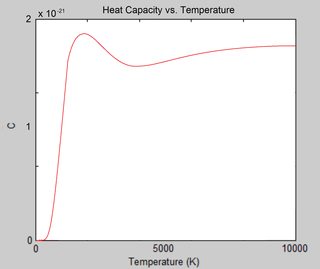 The lab manual states asks me to explain the 'bump' in the heat capacity. The trouble is that I do not understand what could be causing it. By the equipartition theorem, I expected the heat capacity to be constant because $U = NfkT/2$ and $C_V = \partial U / \partial T = Nfk/2$. ie. the heat capacity doesn't depend on temperature.

Now, I understand that the heat capacity should go to $0$ for $T=0$ and it should be constant for high $T$. The graph shows both of these properties. But what could be possibly causing this bump?

I know that parahydrogen displays this behavior. However, my understanding is that this is due to the restrictions on the energy levels and the residual rotational energy of the molecule. But here, we are dealing with a monatomic atom. The only degrees of freedom are translational. Why am I seeing analogous behaviour?

So my question is this:

What is the explanation for the local maximum in the heat capacity-temperature graph for a monatomic atom?

If I instead change the graph to summation to

I get the following result: 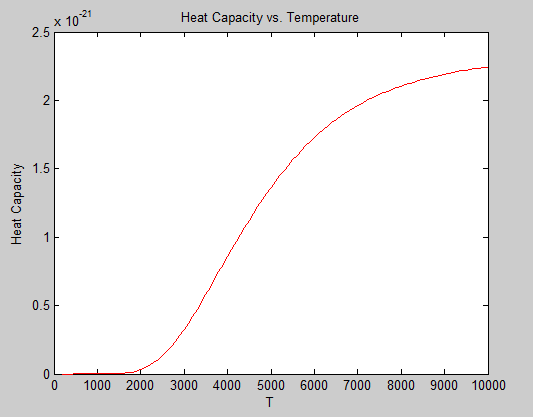 ie. I get what I was expecting when I change the lower summation index to 1. So my updated question is:

Is the correct summation from $n_{x,y,z} = 1$ instead of $0$? This kind of makes sense to me because the equation for the partition function was defined using the particle in a box with $n$ nodes, and it doesn't make sense to have an $n$ that is 0.

You're right to discard the analogy with para hydrogen. In that case, the peak is caused by interaction of the nuclear spins of the two hydrogen atoms.

This is mostly equivalent to Kittel, Thermal Physics, Chapter 3, Ideal Gas: A First Look. In that, he converts the sum to an integral which should be true for temperatures much larger than $\epsilon_0$. In that case, the result is $U=\tfrac32 \tau$ and $c_V = \tfrac32$. Schroeder did the same thing on page 253-254.

Your summations should go up fairly far. Does doubling the upper bound change your curve? Perhaps you haven't converged yet.

1
What intermediate steps of the Dirac Delta Function and Fourier Series am I missing in finding a solution to the Kronig-Penney Model?
11
7/2 versus 9/2 for diatomic heat capacity
2
Expressing eigenstates of $\mathbf{L}^2$ and $L_z$ in terms of the Cartesian eigenstates $|n_x\, n_y\, n_z\rangle$
2
Solution for Schrödinger equation for constant box potential?
3
How does the graph of molar heat capacity point towards quantization of motion?
1
Einstein solid: one or three dimensional quantum harmonic oscillator?
1
Expression of the specific heat capacity in statistical mechanics from the thermodynamical definition
2
When to use phase factors?