See, the DOF in general is given as $f=3N-k$.
Here,
N=Number of atoms in a molecule
k=Total number of constraints

If there are no constraints, then DOF generally is, $f=3N$

Coming to Linear Molecules, let's first assume that the molecules are at low temperatures such that the constituent atoms are not vibrating.

Now, as per this wikipedia link of DOF(Physics and Chemistry) under Gas Molcules, it generalizes the degree of freedom of linear molecules.

With no vibrational modes to consider, it says that:-

DOF of linear molecules: $5$ and is independent to the atomicity of the molecule 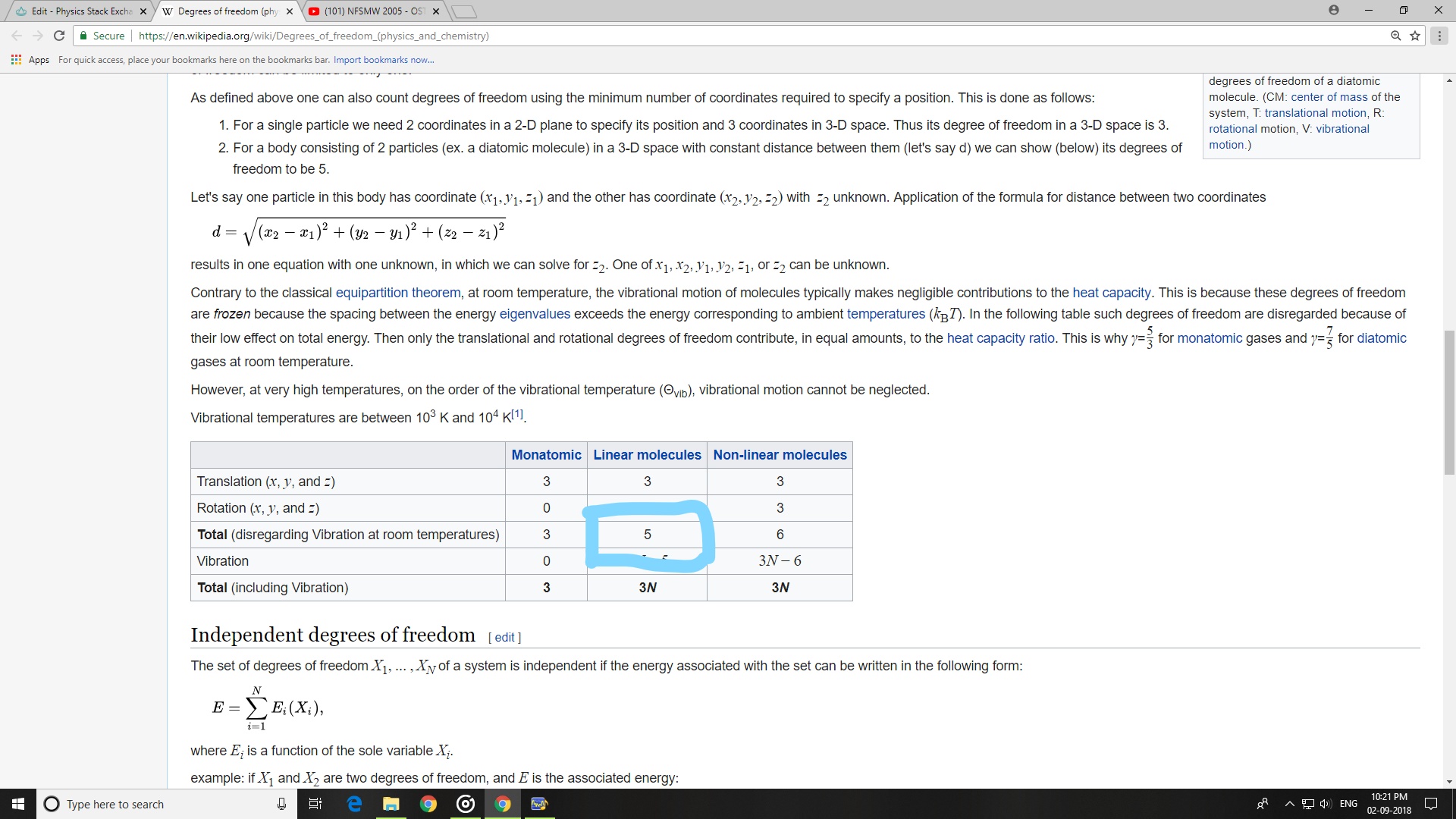 Note: Translation and Rotation about it's Cente of Mass.

Pretty Logical for any type of linear molecules(Di-,Triatomic,etc.)

Now, let's use the formula stated at the beginning. As the formula clearly has the atomicity factor N, we'll consider a basic triatomic linear molecule (also, because this specific molecule is creating doubts).

As the 3 atoms aren't vibrating(assumed initially), so there are 2 fixed distances between the 3 atoms on a straight line. Hence,

Now, the doubt can be clearly seen.

The 5 degree of freedom of the molecule is explained earlier. So, if vibrational modes are neglected for now, then what are those 2 extra DOFs for linear triatomic molecules signifies?

If 5 DOF of linear molecules(given in the wiki) is the actual answer, then, can we say that $f=3N-k$ which I think a general equation is not so general and reliable equation to evaluate DOF of molecules?

Pretty similar question is asked here in this community.
But, there's nothing in response to that post, so I thought to give it a second go.

Another question which give some insight to me is this.
But it didn't answer the 2 questions given above precisely.

Pretty close to $1.28$ which happens to be the $\gamma$ of trilinear molecules at low temperatures where any kind of vibrational degree of freedom is not present.

Now, for solving $\gamma$, first $C_p$ and $C_v$ are evaluated using dof of trilinear molecule which is taken $7$.

So, the discussion in this post earlier concluded that in those 7 dofs, 2 dofs are basically degenerate cases of bending in which the extreme atoms of the molecule remain at a constant distance from the vibrating middle atom.

But as bending is more like a vibrational dof, then it can't exist at low temperatures.

At this point, excluding the bending nature of atoms and evaluating $\gamma$ of trilinear molecules using $f=5$ seems more appropriate.

So, the question here is that if those 2 extra dofs are really vibrational dofs(to be precise, degenerate cases of bending) then why these 2 are considered to evaluate $\gamma$ of CO2?

A trilinear molecule can bend in the middle. In two directions. These are your extra two degrees of freedom.

Not the answer you're looking for? Browse other questions tagged kinetic-theory vibrations molecules degrees-of-freedom or ask your own question.