Mental contradiction: Valence electrons do not move at the non-zero wavevector?

I have a mental contradiction. Let's consider the following band structure with the Fermi energy somewhere inside the gap: 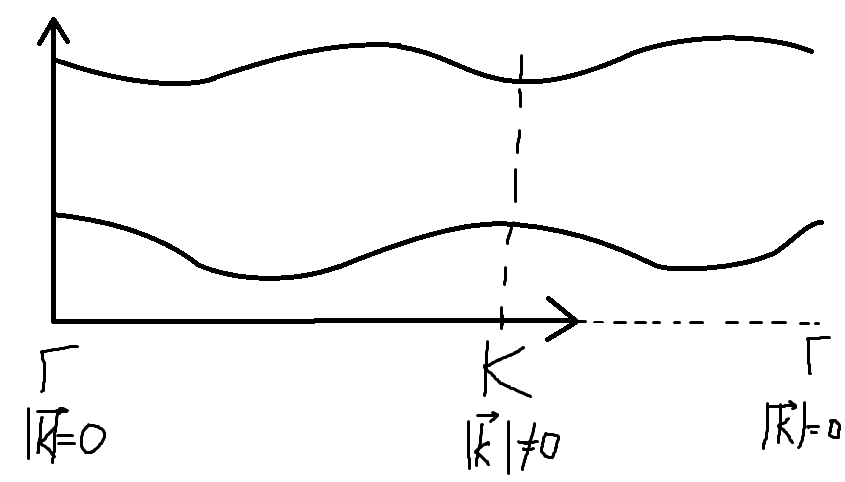 where $\Gamma$ point represents the zero value of the wavevector $|\vec{k}|$. So, we have a direct bandgap semiconductor with the gap at K point. Now, at K symmetry points the corresponding wavevector is not zero. So, electrons have some momentum and feel the periodically changing environment. However, valence electrons are meant to be immobile, until they are kicked to the conduction band. How do these two facts fit each other?

Because you're interpreting $k$ too literally, I think. What electrons can't do in an insulator (or semiconductor at low T) is change state, because the valence band is all filled up. But nothing is said about them not having any momentum. The momentum wavevector, $k$, is a parameter in the wavefunction (and the band energy) and if you didn't have an infinity of non-zero momentum states you wouldn't have a structured band structure at all, just the Gamma point. If your question is "but then, if electrons have momentum, why isn't there a current?" the most classical-sounding answer I can think of is: because the band structure is periodic, and there are also an equal number of electrons with momentum pointing in the opposite direction. So the two cancel out each other. Ultimately, if you try to compute the net quantum probability current over the total unperturbed wavefunction of an insulator, you get zero. Add a perturbation of course (like an external potential strong enough to kick some electrons into the conduction band) and suddenly things change.