How to measure the levels of muonium in the experimental area of a particle accelerator?

I want to know if there is any way of measuring the levels of muonium in the experimental area of a particle accelerator. So, it would start with a beam made up by anti-muons which would collide with a semiconductor or with an insulator. Then, after I've created muonium how could I measure its levels in the experimental area of the particle accelerator? Is there any machine/detector or process that would allow me to do that?

Muonium is an exotic atom made up of an antimuon and an electron,1 which was discovered in 1960 by Vernon W. Hughes 2 and is given the chemical symbol Mu. During the muon's 2.2 µs lifetime, muonium can enter into compounds such as muonium chloride (MuCl) or sodium muonide (NaMu).3 Due to the mass difference between the antimuon and the electron, muonium (μ+e−) is more similar to atomic hydrogen (p+e−) than positronium (e+e−). Its Bohr radius and ionization energy are within 0.5% of hydrogen, deuterium, and tritium, and thus it can usefully be considered as an exotic light isotope of hydrogen.

This is the definition of muonium, to contrast with:

Normally in the nomenclature of particle physics, an atom composed of a positively charged particle bound to an electron is named after the positive particle with "-ium" appended, in this case "muium". The suffix "-onium" is mostly used for bound states of a particle with its own antiparticle. The exotic atom consisting of a muon and an antimuon is known as "true muonium". It is yet to be observed, but it may have been generated in the collision of electron and positron beams.

Here is an experiment that measured specific energy levels of muonium

The experiment was performed using the intense pulsed muon source at the ISIS synchrotron of the Rutherford Appleton Laboratory (RAL) in Chilton, UK. The accelerator operates at 50 Hz repetition rate and provides in its DEVA beam area 3500 μ + per pulse at p=26.5 MeV/c momentum and p/p=10% momentum bite. Muonium atoms were formed by electron capture after stopping the muons close to the surface of a target of SiO 2 powder (Cabosil M5,, Cabot Company). About 80 atoms per pulse left the target through its surface.

Intense laser beams are used to excite the muonium to a higher level .

The 1s-2s transition was detected through the photoionisation of the excited 2s state in the same laser field.

They found radiation from muons with the specific energy level transition, that showed the bound state for the microseconds the muonium atom lives before the muon decays to a positron +neutrinos. 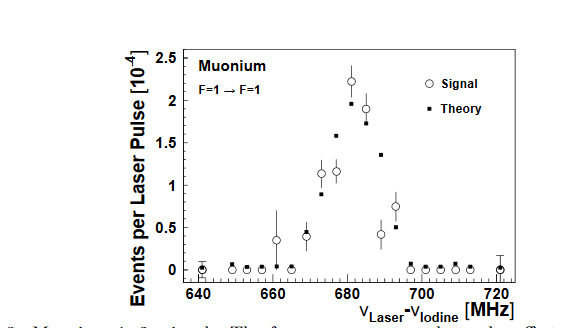 FIG. 3. Muonium 1s-2s signal. The frequency corresponds to the offset of the laser at its fundamental wavelength 732 nm from the relevant reference in the 127 I 2 spectrum. The open circles are the observed signal, the solid squares represent the theoretical expectation based on

This is one example of a specific experiment aiming at high precision comparisons in QED calculations. They have a muon detector .

The original discovery of muonium :

Muonium was identified in 1960 by the groups of Hughes at Columbia and Telegdi at Chicago [132, 24]. The experiments detected the characteristic signal of muonium precession in a weak field by recording the high-energy positrons emitted from polarized muon stops in argon gas. 19 In these circumstances the muonium atoms were directly formed in their 1S ground state by electron cap- ture from argon atoms.

Measured the positrons from the decay of the muon. See page 59 here.

So these are not simple experiments for the student lab.

Not the answer you're looking for? Browse other questions tagged particle-physics antimatter particle-detectors particle-accelerators or ask your own question.

2
Understanding how mass spectroscopy works
8
Does a muon detector on Earth's surface correctly measure the mean lifetime of a muon?
3
Detecting negative energy products in particle accelerators
0
Time dilation for radioactive particles
1
Coincidence measurements of cosmic ray particles
7
When physicists say they have discovered a “particle” that is it's own anti-matter what does this mean?
1
Can pair production produce any particle/anti-particle pair?
1
Is it possible to detect muonium at the end of the experimental area of a particle accelerator by exciting its electron?