I know it's not possible with Earth today, but With today's level of material science technology, would it be possible to make cable strong and light enough to make a space elevator system connecting a Mars-synchronous satellite to an anchor on Mars' surface, ignoring any load at all by an elevator car? Or can someone say with a high degree of certainty that the level of strength to weight possible in cables today is still far from possible even with Mars' lower mass compared to Earth?

the simple answer is no. Materials for an Earth elevator are at least one order of strength too weak at this time. Mars gravity is around 0.378 of earth, so materials are still too weak.

The long answer is much more complicated: 1. Taper of the tether plays a role as much as the safety factor you want to engineer into your elevator, how much a tether can hold, and how much material you can put into space to construct it. Strength, taper, and tether mass are related. You can check for the Space Elevator feasibility condition via isec.org or Google. It is basically some form of decay equation: how much do you need to keep lifting to maintain or grow your elevator, basically taking away from transport payload for maintenance/repairs. 2. Mars has some interesting options with Deimos being made of mostly Carbon. Material for a tether could be refined on site, e.g., when Planetary Resources engineers related technology for asteroids. Deimos' orbital period is with 30.30h is close to the sidereal rotation period of Mars with 24.6229 h. You could work a tether that drops from Deimos part way into the Mars atmosphere and get something that you could attach to with much smaller Delta V than getting to orbit, thus limiting tether strength and mass requirements substantially further. I strongly believe that that the Deimos model is probably close to being within reach of today's advanced materials. Of course you need to work out some control to avoid Phobos dropping by every so often below Deimos. 3. The best anchor point for a Mars Elevator, once material becomes sufficently strong for surface attachment would be on Olympus mons. That puts it above sand storms and other Mars weather.

Finally: I believe that Mars is destined to become the shipyard for the solar system. It is sufficiently friendly for construction sites and the lower gravity makes it much more amenable to lift things to space than Earth.

Hope this helps. Let me know if you have any more questions about the material strength.

The calculations for the tapered space elevator are a little nasty, but apparently fairly workable as a closed form. I feel like it's rather unsatisfactory to leave this question without a quantitative sense, considering that it's possible.

To start off with, we need to formalize the fact that we're interested in the change in area, tension, or linear mass-thickness over the length of it. All 3 of these are directly proportional to each other. What's more, the differential equation for tapering doesn't care which. That is:

The (sigma/rho) quantity is the material specific strength. I'm using lambda to indicate kg/m linear mass thickness, but you can easily replace it with any of the other proxies. This equation has a solution. Here it is in terms of simple values, and then in terms of the pseudo-potential.

To get the "taper ratio", we're interested in the area at geosynchronous orbit divided by the areas at the surface. This just consists of plugging in values.

Most people reading this probably have the requisite knowledge to do this calculation. Here are some, just to look at. I divided the specific strength by a factor of 3 to give a sense of the "engineering margin"

You can see that in a pedantic way, yes, kevlar is strong enough to be a Mars elevator going by yield strength. But that's only if it is literally stressed to its yield strength. Even then, you're at a taper ratio of 43. Add in some margin, and this explodes to factors which are a good fraction of a million.

I didn't include the 3x ratio for seatbelt material, because I took the value which is the actual "working load". It's a good sample for an "everyday" material, even if depressing.

But still, I'll have to concede that it is possible, since Zylon is a real material, even if I am skeptical the industrial production capability and quality control. If you'll just accept the ratio of 1,929 then we can agree it is possible. It might be promptly broken by a meteorite, but that's not the question. Since this is an area ratio, the diameter ratio will only be about 43. That is, if the diameter on the surface is 1 mm, then the diameter at GEO will be 4.3 cm. You are free to interpret the consequences of that result as you see fit.

The sci-fi book Ouroboros Wave entertains this exact idea. In that book, they used engineered systems to flex a Martian space elevator made of carbon nanotubes to avoid Phobos when it passed by, which is an important point.

If you were going to build a Martian space elevator, you would either have to do something like this to avoid Phobos, or just crash it into the planet before you start. There is a distinct proposal to put a space elevator on the dark side of Phobos, since it is tidally locked. Phobos orbits almost 3 times every Martian day. That means that $\omega$ is larger for that system, which means that it will be much easier to build.

Alan Rominger gave some good information in his answer. Not only some numbers but how to get the numbers. I would like to add to it.

The approach I use is different from Rominger's. I try to explain it here. To get acceleration at elevator foot the model subtracts $\omega^2r$ from $GM_{planet}/r^2$ to get net acceleration. If a moon is the tether anchor, $GM_{moon}/r_{moon}^2$ is also included, whether this acceleration is added or subtracted depends if the tether is above or below the moon.

This net acceleration times kilograms gives the newtons payload exerts. This sets the thickness of the first length of zylon. The next length of tether is thicker as it supports the first length as well as payload. The model chops the tether into a 1000 lengths.

Here is a screen capture from my look at a Mars elevator: 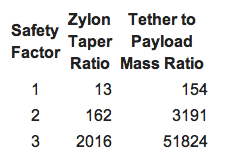 My model based on Wolfe's spreadsheet also gives ratio of Zylon tether to payload mass. For a safety factor of 1, you'd need 154 times the mass in Zylon as the payload being lifted. By "payload" I mean the elevator car and contents. The elevator car would need its own power source and engines. So the actual cargo would be even less.

With a safety factor of 1, the slightest nick or scrape will cause a break. Given the large length of this elevator, I'd expect breaks to be frequent. I would not risk valuable cargo on such an elevator, much less human lives.

Given a sensible safety factor of three, tether to payload ratio would be 51,824.

And this wouldn't be the entire elevator. There must be tether and a counterweight above Mars synchronous orbit to balance the downward newtons exerted by the lower elevator.

A Zylon Clarke tower for Mars is implausible.

I am excited about elevators allowing a Zero Relative Velocity Transfer Orbit (ZRVTO) between Phobos and Deimos: 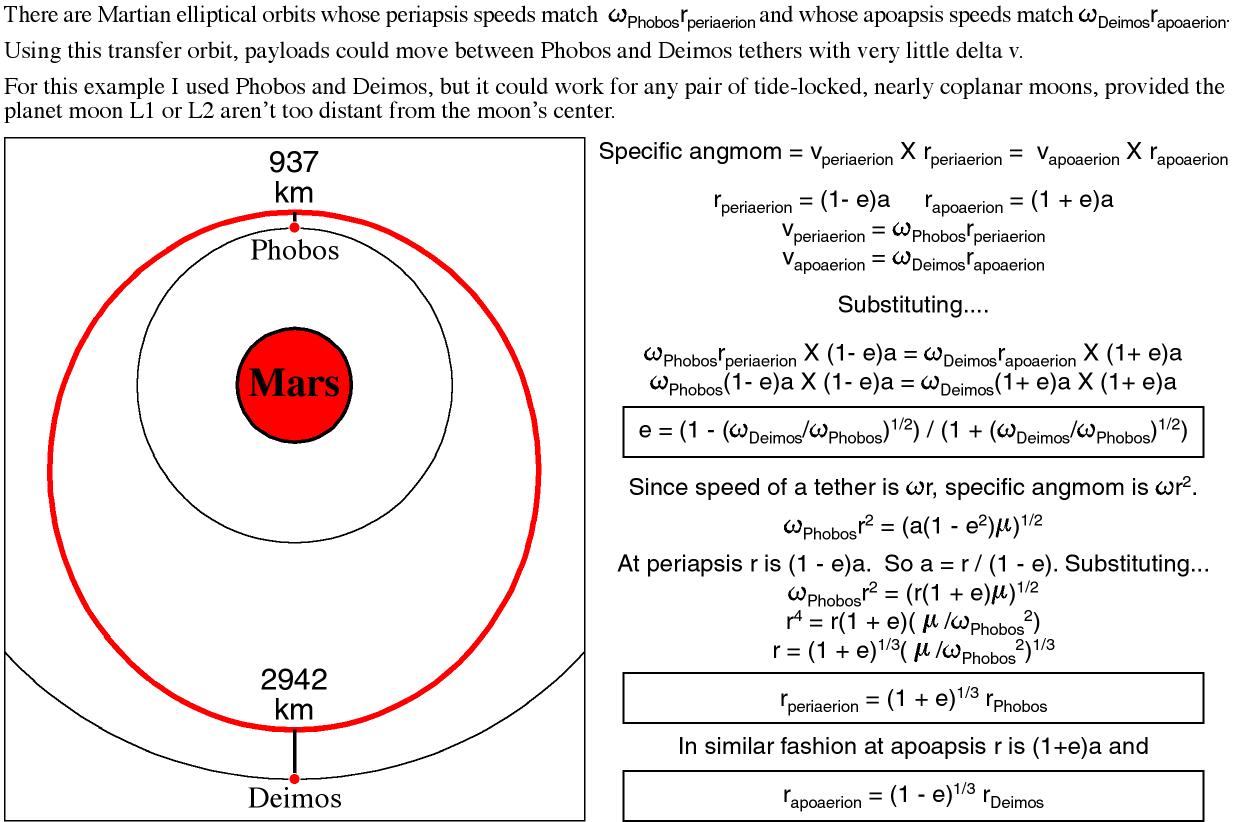 Taper ratios and tether to payload ratios for these two elevators are quite modest: 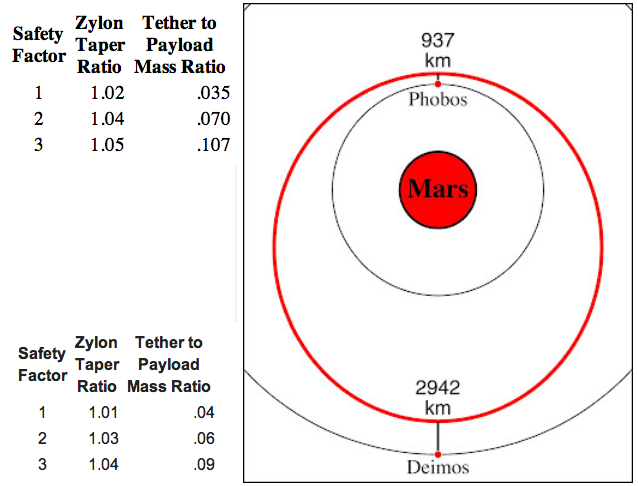 Extend the upper Phobos elevator and you can fling payloads to the Main Asteroid Belt as well as towards earth. And without prohibitive tether to payload mass ratios.

Extend the lower Phobos elevator 1400 kilometers and you can drop payloads into orbits where periapsis passes through Mars' upper atmosphere. A few periapsis drag passes can circularize at low Mars orbit with a velocity of about 3.4 km/s. EDL would be easier than the 5.5 km/s atmospheric entry a payload incoming from an earth to Mars Hohmann would experience. Especially if the descent vehicle had some propellent and reaction mass from Phobos. Mars EDL could be considerably easier. Given a safety factor of three, tether to payload mass ratio would be .33.

Can a Zylon Phobos elevator descend all the way to Mars upper atmosphere? If so, tether foot velocity with regard to Mars would only be .6 km/s. That's only about mach 2, the Concorde did that. But alas, given a safety factor of three, tether to payload mass ratio would be 638. I don't think a lower Phobos Zylon elevator 5,800 km long is practical.

It is actually an old ladies myth that the space elevator cannot be built with current technology. It would just be extraordinarily more expensive with current materials.

The elevator needs to be built from geostationary orbit downward. This means that all the material needs to be pulled up by conventional propulsion, this is the principal factor affecting cost. The conventional approach to build an elevator without materials satisfying the strong tensile requirements that are required for the single-tether design would have to be an exponential structure; a single tether connected to earth, supported by two tether, supported themselves by 4 tethers,.. until reaching above geo orbit, where we'll have to attach $2^n$ tethers to the counterweight, where $n$ is given by the tensile properties of the chosen material.

If you have already one space elevator, then it is easier/cheaper to build a second one, because the expensive step of moving the mass up has already been bootstrapped. In the case of mars, it would make more economical sense to actually send the building materials from earth than to uplift them from mars surface, assuming of course we already have a working elevator on earth