Is it possible to cut harder material with a less hard material?

Is it possible to cut harder material with a less hard material - for example cut a steel rod with iron blade ?

It depends on your definition of "cutting".

Hardness of a material relates to its yield strength - the stress it can sustain without plastic deformation. Push a "soft" material with a sharpened point into a "harder" material, and the tip will go blunt because the soft material deforms. This is why diamond powder is often used to coat grinding wheels etc - the diamond has very high hardness and doesn't go blunt under normal circumstances. Of course it is just carbon, and when heated sufficiently it will undergo chemical reactions - so even with diamond you have to watch the cutting speed to prevent the tip from getting too hot and going blunt.

But there are many instances of "soft" material cutting harder material - even the Romans knew this, and the poet Ovidius Nero wrote

(Approximate translation: the drop hollows the stone not by force but by repeatedly falling)

The pressure that a water jet can produce during cavitation; the momentum of.a soft sand grain burrowing into a hard coating; the heat generated when laser light hits a surface; the heat of electrons decelerating as they hit an anode - all these and more can be mechanisms of material removal which can be used to shape an object - "cut" it. Typically the mechanism is that local pressure, while exceeding the yield stress of the "soft" material, cannot be dissipated because of the speed of impact.

An example is the impact of a drop of water with a surface. During the early phase of the impact, the curved front of the drop is flattened as it hits the surface; during this phase the contact point between the drop and the surface travels supersonically, meaning that the shock wave that builds up inside the drop remains attached to the contact point, and the pressure inside the drop builds up considerably (source: "ELSI conference: invited lecture Liquid impact: theory, experiment, applications", JE Field, Wear 233–235 1999 1–12): 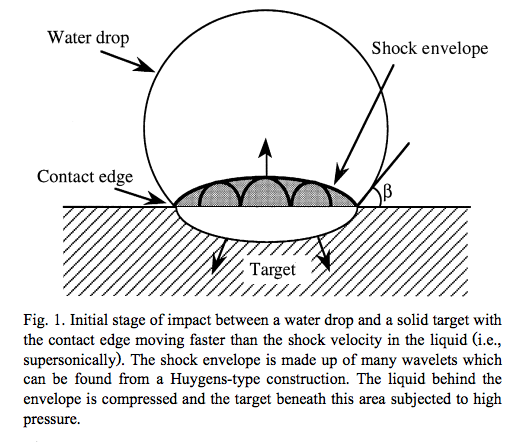 As the contact point slows down when the contact angle increases, the pressure eventually can escape, resulting in a jet of water across the surface which creates terrific shear stresses. This results in a very characteristic damage shape: 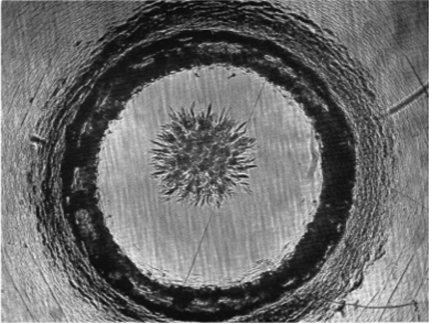 This particular example is for plexiglass (polycarbonate) which is a great material for studying the subsurface cracking - but the same thing happens with harder material. Source of the above image: http://blog.kmt-waterjet.com/category/waterjet-technology/ . If you are interested in learning more about this, consult the proceedings of the ELSI conferences that were held in Cambridge (UK) during the 80's and 90's (Erosion by Liquid and Solid Impact). A good start would be the above referenced lecture by Dr JE Field who was the conference's organizer.

So yes - if your definition of cutting is broad enough to include "able to remove material", then a soft material can cut a harder one.

Yes, is possible. For example, you can see this, water can cut steel.

One can cut a any material by using a (slightly) softer abrasive material and a soft tool that can press the abrasive against the cutting surface. The tool will simply abrade much faster than the object that is being cut and it will take lots of abrasive and time, but that's OK. This kind of abrasive cutting/grinding is quite common.

The light rays are crisscrossing in front of you now! $_1$ Do you consider it as soft? It depends on your definition. Your softy light is used to cut hardest materials by using the process called laser cutting.

The focused laser beam directed at the material, which then either melts, burns, vaporizes away, or is blown away by a jet of gas.$_2$ 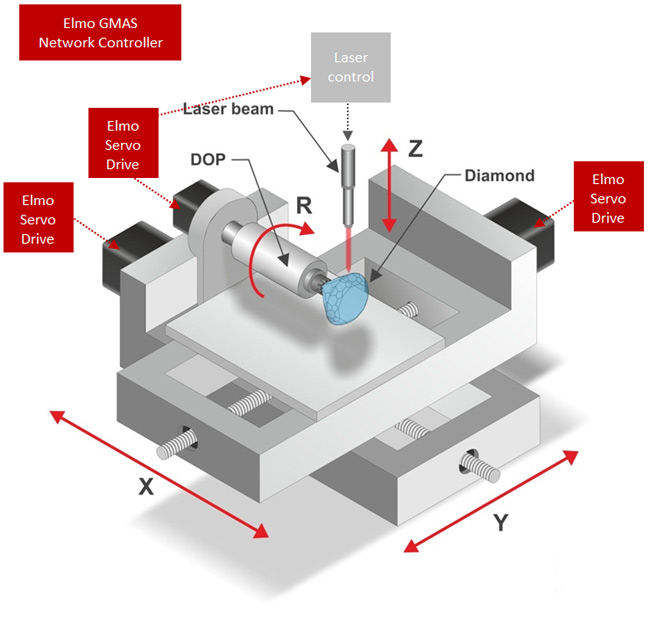 Fig.$_3$Example of a diamond laser cutting machine with the GMAS multi-axis controller and 3 Elmo servo drives controlling 3 motors and a laser.

Overall the ability of a material to cut another material depends on the speed of it piercing, its sharpness, its hardness, etc.

I believe a fast-rotating blade can cut a harder material.

I believe that it depends on the method of cutting, and on the energy of the material used for cutting. Sure, air can cut steel. If it is heated to several thousand degrees in an arc welder. However, air at the same temperature as the steel is not likely to cut the steel.

I believe the method you are asking about is the classic material removal method. One object, like a saw, removing material from another object, like a 2x4. If we limit your question to only this method of cutting, then yes, to the best of my knowledge the saw must be harder than the wood.

However if you include other types of cutting, like cutting with a cleaver or other large and heavy knife, you could cut something like steel. (Imagine a huge, very sharp, very massive knife chopping steel wire. Possible, but damages the iron blade, and I believe only works because the difference in masses is so dramatic.)

you could have a larger amount of the softer material so by the end of the cutting you have zero soft material left.

Not the answer you're looking for? Browse other questions tagged classical-mechanics material-science or ask your own question.

52
Can a tomato pierce a hole in a steel plate if only the tomato is travelling fast enough?
2
Can a drop of liquid splash as high as its origin?
-1
Basic(?) question of impact of a cup with a car grill

0
Calculation of the maximum load to the bar
4
First-principles derivation of cutting force
2
How is spring steel so hard?
1
How does an infinitely hard tip scratch an amorphous brittle material when it slides along it?
2
Will an extremely hard material wear away or fatigue if enough very-low energy contacts occur with a softer material?
5
Why steel can be blunted by ice?
125
Why does paper cut through things so well?
1
How do knife blades become dull?
14
Will cutting sand paper with scissors make the scissors sharper or duller?