Consider a theoretical nucleus that is both neutron rich and heavy e.g. $A=300$, $N=250$. Is it possible to say whether it is more likely to undergo $\beta^-$ decay or $\alpha$ decay (or even cluster decay or fission) or does this depend on the specific nature of the atom? Please can you explain your answer.

It could be both!

Your hypothetical nucleus is beyond the neutron drip line and would decay by neutron emission. However, consider the polonium isotopes, whose alpha-decay branching ratios are plotted below: 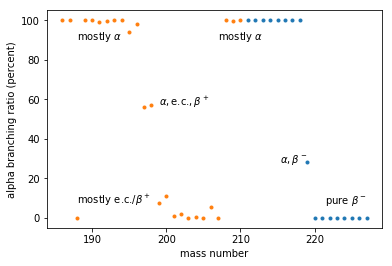 None is stable against alpha decay. However most of the isotopes (and the long-lived isomers) with mass $190 < A < 209$ have a non-negligible branching ratio for both alpha decay and positron decay/electron capture. On the neutron-rich side, it seems that for whatever reason most of the isotopes decay overwhelmingly by either alpha or beta decay, but in $\rm^{219}Po$ the branching ratios for alpha and beta decay are different by only a factor of three.

For the proton-rich polonium isotopes, I don't really see a pattern in whether alpha decay or electron capture is the dominant decay method. For example I would have expected the most proton-rich poloniums to decay by electron capture and positron emission, but those with $A < 195$ (with the exception of $\rm^{188}Po$) are overwhelmingly alpha emitters. That suggests there's some complicated final-state stuff happening.

Usually a neutron heavy nucleus would do both. It might first undergo beta decay and turn some neutrons into protons. Then release bundle of those newly formed protons and some remaining neutrons.

This process might continue for a while until the nucleus is stable.

4
Effect on electron shells energy levels during nuclear decay
2
Why don't neutrons cluster on their own?
3
Why $\beta ^+$ decay occurs inside the nucleus?
3
How does mass-energy equivalence work differently in nuclear decay where there is nucleus excitation?
1
In discussions of nuclear radiation, why comparitively scant mention of neutron radiation?
3
Why are lighter nuclei dominated by $\beta$-decay and heavier ones by $\alpha$-decay?
2
What is the extreme long-term elemental composition of the universe?
0
Where could I find a reliable source that states all the existing radioactive decays?
5
Is there any simple way to predict beta decay half lives?
2
Could a Λ or Σ baryon be stable inside a nucleus?