What is the extreme long-term elemental composition of the universe?

In Freeman Dyson's classic 1979 Time Without End paper he points out that, if proton decay does not occur, then normal matter will spontaneously fuse to iron on a timescale of $10^{1500}$ years, and heavier elements will undergo fission or alpha emission, again producing iron (although he does not calculate the timescale). My question is how correct this picture is.

It is a well-known quibble that strictly speaking, $^{56}$Fe is not the most tightly bound nucleus: it has 8790.4 keV binding energy per particle but $^{58}$Fe has 8792.3 and $^{62}$Ni has 8794.5. More subtly, this depends on whether we consider adding the right number of nucleons or the right number of protons and neutrons. So it might appear that the long-term composition of matter would hence be nickel-dominated.

However, just like the stellar formation processes favour $^{56}$Fe over $^{62}$Ni despite the energy difference because of the relative scarcity of neutrons to bridge the gap between them, the actual decay processes in the far future also seem to lead to trapping in other isotopes. $\alpha$-decays require a positive Q-value for $^{A}_{Z}X\rightarrow ^{A-4}_{Z-2}Y+\alpha+Q$: this becomes common above $A>102$, but below the energy difference is too small to allow $\alpha$-decay. $\beta$-decay to the rescue! They (and electron capture) happen across the entire $A$ range, but only change $Z$ by $\pm1$. So this appears to lead to a lock-in where heavy element decay get stuck in the region $62>A>102$. In this argument I have assumed that any energetically allowed transition will eventually happen; at least some $\beta$-decays are presumably blocked by spin considerations.

I seriously doubt Dyson would have made a mistake (even though this is an extremely minor part of the paper), so what is going on? Spontaneous fission reducing everything to the iron peak? Or is the long-term chemical composition of the universe a mixture of stable heavyish elements?

[ Some other minor issues: in $\Lambda$CDM cosmology rapid expansion also makes many atoms and molecules isolated so their fusion processes end long before iron. There are also issues with spontaneous ionization and possibly nuclear decay due to the Herzfeld "paradox" of divergent partition functions for completely isolated atoms. And, as Dyson pointed out, iron is metastable to tunnelling into neutron star or black hole states. ]

I went through your link, and this is an answer to your title,

What is the extreme long-term elemental composition of the universe?

The summary answer is the the table given in the link: 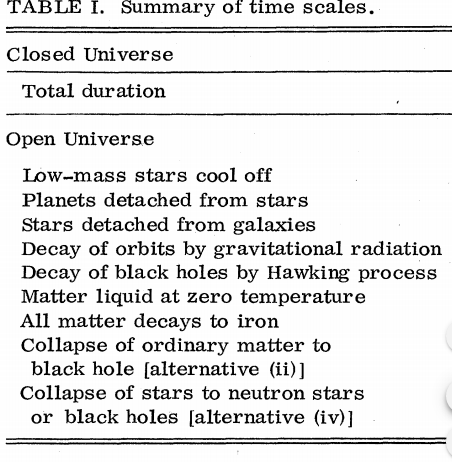 To clarify, all matter turns to iron is talking about matter in stars,

After the time ($=10^{1500}$ yrs) elapsed, most of the matter in the universe is in the form of ordinary low-mass stars that have settled down into white dwarf configurations and become cold spheres of pure iron.

not all matter in the universe, which still will have in the huge empty spaces hydrogen mainly but also a lot of atomic matter debris which at the temperature of zero will not meet another debris to fuse into anything. (Of course radiation will be there also). He proposes iron t so he can do some calculations.

Whether stars become iron or another element , or many elements is immaterial to his discussion which leads to the alternatives of neutron stars and black holes, which is the point of his perambulation. All this assuming that the protons do not decay, and he gives references to later theoretical papers, where proton decay is calculated.

Well, according to John Baez, you'd eventually wind up with a whole lot of really cold, really empty, space. He seems think that by 10^23 years the universe will consist mainly of, "black dwarfs, neutron stars, and black holes together with atoms and molecules of gas, dust particles, and of course planets and other crud, all very close to absolute zero." He also agrees with the spontaneous ionization you cited in your original post. Black holes should evaporate by 10^99 years. The smallest black dwarves should be converted entirely into iron by 10^3200 years.

Then, in 10^10^26 years, "if smaller black dwarfs and planets and the like don't evaporate and their protons don't decay, they may quantum-tunnel into becoming solid iron. And then, if this iron doesn't evaporate and nothing else happens, these balls of iron will eventually quantum-tunnel into becoming black holes, which then Hawking-radiate away."

So, I guess, eventually and for a very long time, chemical composition of the universe will be pretty much just iron, then black holes, then photons, and then... nothing. Which, I guess, could bring us back to Penrose's CCC and the birth of a new universe. And if we take things just a little farther, then I guess we're probably back to hydrogen, with a sprinkling of helium and a dash of lithium ;-)

Not the answer you're looking for? Browse other questions tagged cosmology nuclear-physics radioactivity or ask your own question.

1
Thermodynamically speaking, in the absence of proton decay will matter decay into Iron-56 or Nickel-62?

9
Does the population of higher level s-shells affect the decay rate of alpha emitters?
3
Anisotropic charge screening and the rate of spontaneous fission
2
How should I interpret these decay chain numbers?
3
Physical limit for the shortest possible half-life?
3
How does mass-energy equivalence work differently in nuclear decay where there is nucleus excitation?
2
Why spontaneous nuclear fission not classified as a kind of radioactive decay?
0
Where could I find a reliable source that states all the existing radioactive decays?
5
Is there any simple way to predict beta decay half lives?
0
How can a nuclear chain reaction start?
0
How much faster does induced fission in a typical reactor occur than spontaneous fission in nature?