How protons come near to during the formation of a nucleus?

It is known that protons are held together inside the nucleus by nuclear forces which are short range forces. Now my question is how are the protons brought together when they are far apart despite their repulsion?

Protons with high enough kinetic energy can approach each other so much, in spite of the Coulomb repulsion, that they can tunnel through the remaining energy barrier and come into the reach of the strong nuclear force. The resulting diproton nucleus is unstable and one proton converts into a neutron so that a deuterium nucleus (deuteron) results. This deuterium continues in fusion reactions that fuel our sun.

As @freecharly mentioned and @Bill N remarked, it is about tunneling and kinetic energies.

A clear example emerge in the so-called stellar nucleosynthesis. Here, we have two main protagonists: the gravitational force, which tends to contract the star, and the nuclear fusion reaction, which compensate the previous one and keep the star stable. The gravitational attraction also causes the temperature, say the kinetic energy of the protons (or the other nuclei), to raise, and this is what makes the fusion process start.

Take the Sun. Roughly speaking it has a core temperature of about $1.6\times 10^7$ K. Then, we can get the kinetic energy by

This is quite a small energy and leads to a very long tunneling (hence very small cross sections). To get a graphical idea of the comparison between the coulomb barrier and the average kinetic energy take a look at the image below (Coulomb repulsion $=\frac{Z_1Z_2e^2}{r}\sim\frac{1.44\text{ MeVfm}}{r}$). 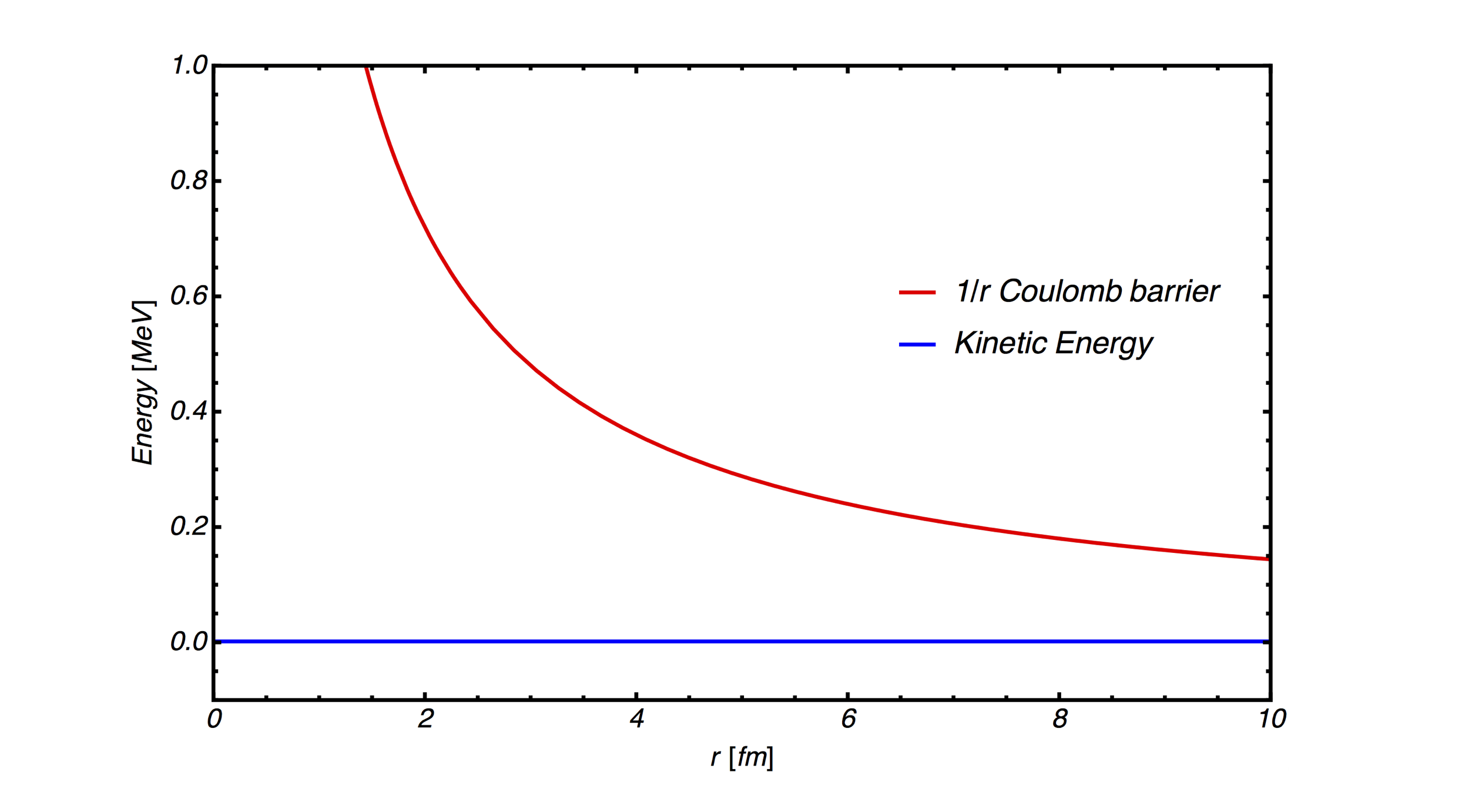 This kind of argument holds in general when you are talking about nuclear processes involving nuclei subject to the Coulomb repulsion, therefore all the further stages of the stellar nucleosynthesis or the various processes of the Big Bang nucleosynthesis (the formation of nuclei in the firsts minutes of our universe).

In the end, the answer to your question is kinetic energy, which can be gained from anything that can make the two protons (or any particle/nucleus) overtake their Coulomb barrier, whether it is electromagnetic fields, such as in particle accelerators (LHC at CERN, etc.), or gravitational force, as in astrophysical environments.

Not the answer you're looking for? Browse other questions tagged nuclear-physics coulombs-law protons strong-force or ask your own question.

16
Protons' repulsion within a nucleus
8
Evidence that nuclei contain neutrons and protons (other than nucleons appearing if a nucleus is smashed)?
2
Electrostatic force has longer range than strong nuclear force?
3
Basic questions about the strong force
1
formation of atomic nuclei from nucleons
0
Do magnesium-32 nuclei look like soccer balls?