Am I correct in saying that nuclear fission plants commonly use the energy released from nuclear reactions is used to boil water to produce steam, which then moves a turbine connected to a generator producing electricity.

My question is what energy conversion takes place during this process. Is it true that the daughter atoms of the fissile are released wit kinetic energy, and if so, where did the kinetic energy come from, as the conservation of energy states that energy cannot be made or destroyed. Also is this kinetic energy later turned into heat energy used to boil the water and then the turbine finally converts kinetic energy into electrical energy

In a fission reaction it's nuclear potential energy that is converted to kinetic energy.

The nucleons are bound together in the nucleus by the strong nuclear force. The total amount of energy it would take overcome this force and disassemble the nucleus to individual protons and neutrons is called the nuclear binding energy.

The same nucleons exist before and after a fission reaction but the total amount of nuclear binding energy depends what which nucleus (or nuclei) they are in. See the graph below. 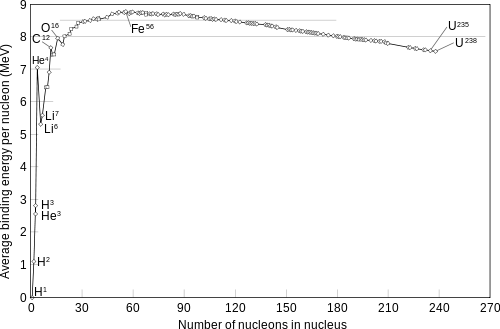 The average binding of energy of the nucleons becomes greater when the uranium atoms undergo fission and form lighter nuclei. This is to say it would now take even more energy to disassemble all to individual protons and neutrons. It's a bit like falling further down a hole. It now takes more energy to get out.

The nuclear potential energy is mostly converted into kinetic energy of the daughter nuclei, a small fraction (about 6%) of the energy goes into gamma rays and fast neutrons.

In nuclear fission the energy released is in the form of kinetic energy of the atoms (main part) and neutrons produced in the fission and of gamma radiation. Furthermore, the daughter atoms undergo beta and other decay processes that release more energy. The source of the energy in atomic fission is the difference in rest mass $\Delta M$ between the original atom and its fission products according to $E=\Delta M c^2$. This energy is is largely converted into heat which in nuclear power reactors is used to generate electricity, e.g. by steam engines.

Not the answer you're looking for? Browse other questions tagged energy nuclear-physics or ask your own question.