How exactly does nuclear reactor work in generating energy, when the energy created from fission transformed into binding energy?

I asked this question because I'm a bit confused about the concept of binding energy.

From my understanding, in a nuclear reactor, Uranium-235 atoms are bombarded with neutrons so that fission reactions occur. The products of the reaction has a total mass that is less than the reactants' total mass (Uranium-235 and a neutron) and thus there is a mass defect and this mass defect has transformed into the binding energy in the products by Einsteins equation E=mc^2

If the mass defect turned into binding energy, and binding energy refers to the energy used to keep the nucleons of an atom or together, then how is energy generated in a nuclear reactor for human consumption?

Shouldn't the mass defect be instead transformed into heat energy to create steam to drive the turbines in the nuclear reactor to generate electricity for human consumption?

The confusion is in your statement "this mass defect has transformed into the binding energy in the products". It is more or less the other way around. The mass defect corresponds to the binding energy that kept the fragments together in the original nucleus. It is converted into kinetic energy of the fragments upon fission. That kinetic energy is converted into electricity and heat in a nuclear fission reactor.

Large nuclei are unstable for a number of reasons one being that the long range coulomb repulsion force between protons is becoming more "dominant", as the number of protons in the nucleus increases, compared with the attractive short range nuclear force between all the nucleons.
So large nuclei try and dilute the effect of the coulomb repulsion by adding more neutral neutrons which feel the attractive strong nuclear force but not the coulomb force.
But it is a delicate balance and large nuclei want to become more stable by turning into nuclei with smaller numbers of protons within them.
The parameter which is useful when comparing the stability of nuclei is the binding energy per nucleon and the largest values of this parameter centre around the nucleus of iron.

So nuclei much larger than iron are trying to break up into smaller nuclei which are closer in composition to iron nuclei and thus become more stable.

The masses of the nucleus undergoing fusion is greater than the mass of the fission products and that mass difference is called the mass defect $\Delta m$ and the energy released in the fission process is given by $\Delta m \, c^2$.

If the mass defect turned into binding energy

is not correct and the energy equivalent of the mass defect is released in the fission process but indeed the resulting nuclei are more stable (have a higher binding energy per nucleon) than the nucleus undergoing fission.

Update as a result of a question frpm @BøbbyLeung

If the mass defect does not become binding energy, then where would the increase in binding energy of the product nuclei come from (based on the conservation of energy)?

The binding energy of a nucleus is the energy required to break up a nucleus into its constituent parts (individual nucleons).

In terms of numbers let us suppose that you had a nucleus with $120$ nucleons and the binding energy per nucleon was $6$ arbitrary energy units .
If this nucleus was assembled from individual nucleons $120 \times 6 = 720$ units of energy would have been released.
Suppose further that for a nucleus with $240$ nucleons the binding energy was $5$ energy units.
To assemble such a nucleus from individual nucleons would have released $240 \times 5 = 1200$ units of energy.

Now what happens when the nucleus with $240$ nucleons splits into (undergoes fission) two nuclei each with $120$ nucleons.

Perhaps your questions are answered in terms of an energy level diagram? 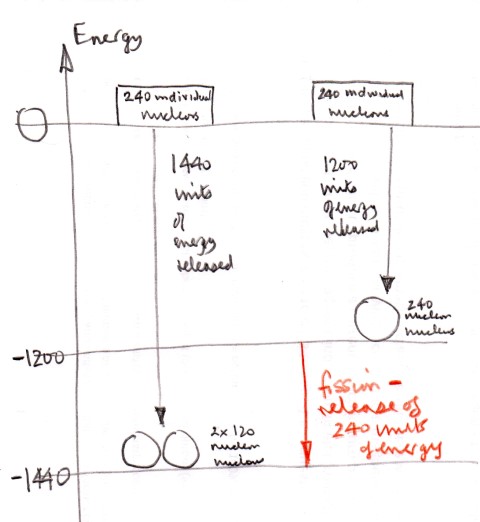 thus there is a mass defect

correct, the products have less mass than the original input.

This is your misunderstanding:

and this mass mass defect has transformed into the binding energy

No, the fission products acquire kinetic energy up to the sum released by the break up.

in the products by Einsteins equation E=mc^2.

This is irrelevant to the problem. One has to use the four vectors of special relativity to be accurate, not the relativistic mass which is not really useful as m depends on the velocity of the individual products. Energy is the conserved quantity.

The fission products have less binding energy per nucleon than the reactants. So there is some "missing" binding energy that goes into kinetic energy of the products. This kinetic energy, on the large scale of a nuclear reactor, is randomized; that is, it becomes heat.