Why do headphones tangle themselves whereas shoe laces untie themselves?

The basic problem is that headphones are heavy and asymmetric, whereas there's nothing attached to the shoelace.

What this means is that the headphone - cord system can get stuck in stationary, locally but not globally minimum energy configurations: the twisting of a cord raises the energy of the cord, but the torsion resulting from the twist is not enough to flip the headphones over when they are on your head or put down on the table; otherwise put, to find the lowest energy state, the headphone - cord system's gravitational potential energy would need to be raised enough so that the headphones could flip. There would be much less tendency to tangle if we had a cord attached to a heavy sphere: the torsion would tend to roll the sphere around on a flat surface to relax and dissipate the elastic potential energy stored in the twisting. The shoelace has a much smaller energy threshold to undo it.

The tangling is a manifestation of supercoiling or writhing. The following is a topological invariant in a fibered loop (Calugareanu-White-Fuller Theorem):

To understand this invariant, imagine taking two long straight fibers, or a ribbon. Now twist the straight entity $T$ half turns, bring the ends of the composite entity together and glue the corresponding fibers / ribbon edge. E.g. you do this procedure with $T=1$ to get a Möbius strip. However, the number of times each strand crosses the other (the "Linking Number" $L$ can be traded off between the quantities twist and writhe, whose intuitive understanding is best given by the following: 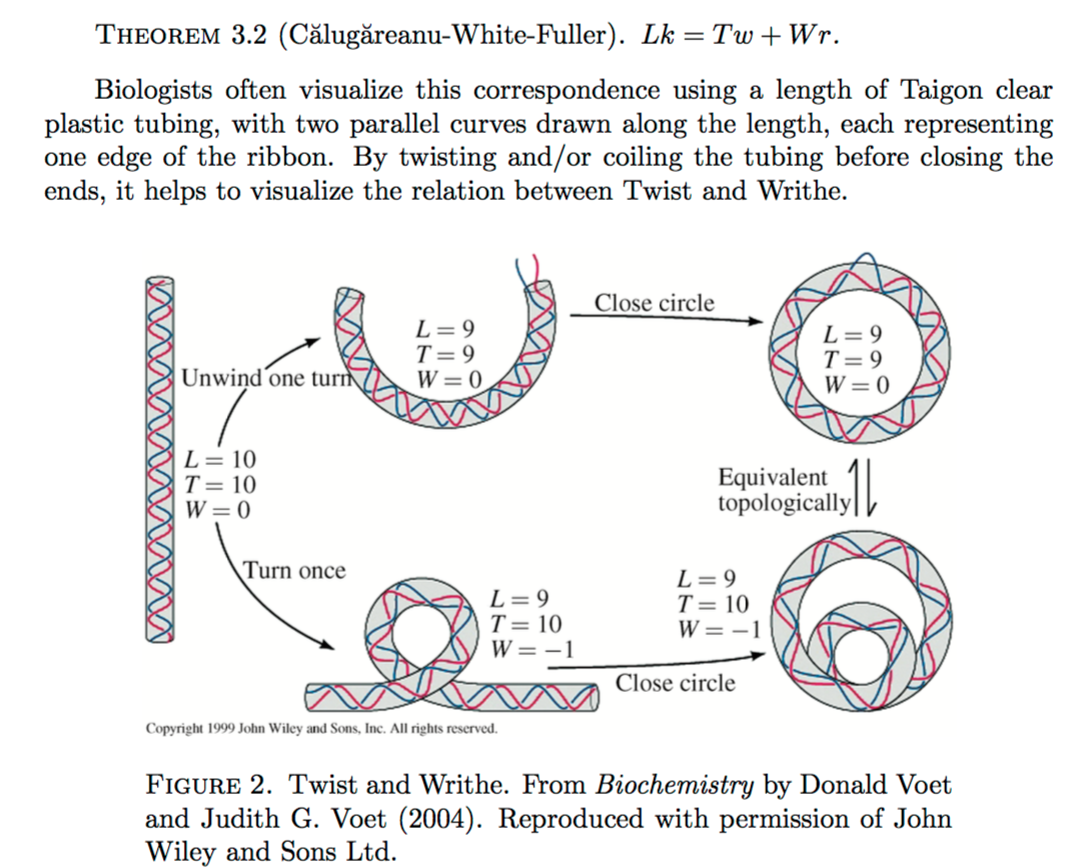 Often in elastic physical systems, writhes represent lower energy than twist, so not all members of $T+W-L$ topological equivalence classes are equivalent from an elastic potential energy standpoint. So the tethered cord (as with the asymmetric headphones or a landline telephone receiver) relaxes by converting the links into writhes.

See Dorothy Buck's paper and also her website: she has done quite extensive research on twisting / writing / linking topology.

My proposed explanation is in the thickness. We wish the headphone wires thin and shoelaces thick. The former favors fixing sharp bends by entangling them randomly, the latter favors straightening them. If we tolerated 5 mm thick nylon yarn around our headphones, they would certainly tangle much less.

Not the answer you're looking for? Browse other questions tagged everyday-life material-science string or ask your own question.

23
How does a twisted piece of string/yarn wind back on itself? What kinds of forces are responsible for this?
48
Why do earphone wires always get tangled up in pocket?

28
Why is paper more frangible when it is wet?
11
Why do flat cords tangle less in my pocket?
3
Why doesn't spaghetti knot when stirred?
3
Slackline tangling
15
Why doesn't hair tangle?
1
If a black colored body absorbs all colors, why does the spectrum of light appear on a black shoe?