I am studying Lasers and frequency combs - and am not quite understanding something.

I understand the working principle of a laser, and thought the Laser output frequency is just the energy gap between the E3: metastable state and the E1: lower level laser state, and the output frequency we will see is just E = E3-E1 = hv, where v is the frequency.

Where exactly do the modes come into play? 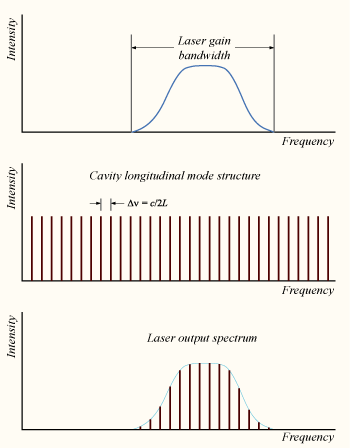 So I understood we just have this one frequency bouncing back and forth between the two mirrors depending on the transtion, with the medium (say ruby) in between them.

(1) How is this one frequency creating all these modes?

(2) What do these modes really mean? So the standing waves inside the cavity will have a frequency of its own -- is this the output laser beam frequency?

(4) are the collection of these modes under the laser gain bandwidth known was a frequency comb? In essence aren't all lasers then frequency combs?

I am very confused. please help me out.

How is this one frequency creating all these modes?

The laser output frequency is determined by two things: The gain spectrum and the cavity mode structure.

In your example, the gain spectrum is the blue line. This is determined by the difference in energy levels, like you said. But the energy levels are not so narrow as you might think. Sometimes what we think of as a single energy level is actually a narrow band of levels caused by some higher-order quantum number of the particles involved. In a gas laser, different particles in the gain medium interact with different bands of photon energy because the particles are moving in different directions (and relativity says a particular photon looks like it has a different energy to a particle moving with a different velocity). Furthermore, there is a fundamental limit on the narrowness of the gain spectrum due to the uncertainty principle in the energy time form $$\Delta{}E\Delta{}t \ge \frac{\hbar}{2}$$

The cavity modes tend to pick out a "narrow slice" of the gain spectrum where the laser equation can be satisfied (round trip gain exceeds the loss). However even the mode lines are not perfectly narrow. Mirrors are not perfectly flat or perfectly reflective, the index of refraction in the cavity is not perfectly uniform or constant with time, etc.

That said, the spectrum in your final diagram is not easy to achieve. Typically, the particles in the gain medium are all one population, and this leads to a single mode dominating the output, even if multiple modes overlap the gain region. This is because as one mode starts to lase, particles begin to drop to the lower energy level due to stimulated emission. Then there are fewer excited particles to support the lasing of other modes. Then positive feedback tends to create one strongly dominant mode.

The output spectrum in your diagram is only possible if there is something about the system so that the particles supporting the lasing at one mode are not the same as the ones supporting lasing at the other lasing modes.

What do these modes really mean? So the standing waves inside the cavity will have a frequency of its own -- is this the output laser beam frequency?

Generally, even the gain spectrum is really fairly narrow, compared to the whole range of frequencies we consider "visisble" or "IR". So for many purposes we'd still consider this monochromatic. But also, the kind of spectrum you showed is not that common. It's more common to have just one dominant output mode (or 2 or 3, with some design effort needed to suppress the side-modes to get a truly monochromatic output)

are the collection of these modes under the laser gain bandwidth known was a frequency comb? In essence aren't all lasers then frequency combs?

If there are many modes lasing then we can call it a frequency comb. But substantial design effort is needed to design a laser with many modes lasing with nearly-equal output power. The spectrum you showed is not a "typical" laser spectrum, but it might be the output of a laser specially designed to have this property.

Not the answer you're looking for? Browse other questions tagged optics laser frequency or ask your own question.

1
Frequency combs: comb line spectra from periodic pulse train?
1
What is an absolute frequency reference (Frequency combs)?
1
Why does generating EUV frequency combs require femtosecond enhanced cavities?
0
Spacing of resonant modes in a (laser) cavity
0
Wavelength of Intermittent Laser vs Prism
0
Confused about mode locking
5
Homogeneous gain saturation and single-longitudinal-mode lasing
1
Why can no commercial laser products achieve a frequency stability of $< 1 \ \text{Hz}$?
3
Why are there no solid-state blue lasers?