While charging a capacitor by a DC source, half energy is wasted as heat. Can't we save that energy? Here I am talking about $$(1/2)CV^2 $$ which is wasted while supplying $$CV^2$$

As has been pointed out by @CuriousOne you can save the energy but let's me first explain the context in which one usually first meet this loss of energy.

A capacitor $C$ in series with a resistor $R$ and a voltage source $V$ is charged.

The energy stored in the capacitor is $\int_0^QVdQ = \int_0^Q\frac Q C dQ = \frac 1 2 CV^2$. The integration has to be done because as the capacitor is charged the voltage across its plates changes.

The missing energy is $\frac 12 CV^2$ and that is lost as heat in the resistor.

To show that is true and the loss is independent of the value of the resistance in the circuit one must do a bit more circuit analysis.
During the charging process it can be shown that the current in the circuit $I(t) = \frac V R e^{-\frac {t}{RC}}$.

If the capacitor is charged in the way described changing the resistance value will not change the amount of energy lost as heat.
If the resistance in becomes very low instead of the charging process following an exponential curve the current in the circuit becomes a damped sinusoid and then energy is lost as heat and electromagnetic waves because the electrons in the wires are accelerating and unbound accelerating charges emit electromagnetic radiation.

In all these cases the "missing" energy turns up as heat due to the resistance in an electrical circuit and friction in the mechanical example.

Using Hooke’s law for a spring of spring constant $k$ which has a static extension of $x$ when a weight $mg$ is hung from its end $mg= kx$.

So how can you save that missing energy?

One reason for introducing the spring is that perhaps discussing the motion of a spring-mass system makes it easier to understand an answer to this question?

What you do is, with the spring unextended, release the mass and catch hold of the mass when it first stops after half a period.

If there are no frictional forces this will happen when the extension of the spring is $2x$.

No energy wasted as heat.

So what about the capacitor?

Here you need as small a resistance value in the circuit as possible so that the voltage across the capacitor oscillates between $0V$ and $2V$ about $V$ (the final voltage value), just like the spring.

No energy wasted as heat.

You have all the energy supplied by the voltage source stored in the capacitor. 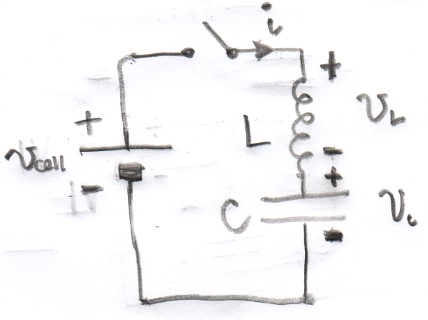 Carrying on there would be an oscillation of the voltage across capacitor between $0$ and $2v_{\rm cell}$ about a voltage of $v_{\rm cell}$ as shown in the output of a simulation with the cell voltage being $1\,\rm V$. Please note that this simulation did not work for me when using Firefox under Windows 10 but did work with Edge.

The period of the oscillation is $2\pi\sqrt{LC}$.

In a comment made by @CuriousOne there is a link to the following images but no explanation. 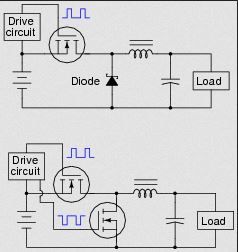 These are in fact examples of switched mode power supplies.
There is more information and some nice animations about the buck convertor and the buck-boost converter here.

Update 2: As requested in the discussion below this answer, here are some more information and clarifications:

If we assume that one has normal conductors (with resistance) and inductance (even parasitic) then those oscillations shown in the transient graph would reduce in amplitude as time went on. As the resistance becomes smaller the electromagnetic radiation loss would become more significant as compared with the ohmic heating loss.

Not the answer you're looking for? Browse other questions tagged electrostatics electric-circuits electrical-resistance capacitance dissipation or ask your own question.

5
What happens to half of the energy in a circuit with a capacitor?
2
Battery charging a Capacitor
0
Energy in electrostatics and magnetostatics: why do factors $\frac{1}{2}$ appear?
0
Mechanical Energy Analog to Capacitance