My question: What is the equation that describes how voltage on charging capacitor is changing with respect to time, where resistor $R_1$ isn't very small compared to $R_2$.

I don't want just equation pasted in the answer section, I want the explanation how to derive it, and explanation of steps which have to be taken to get there.

Thank you very much in advance.

where $V_T$ is the voltage of the battery. Then we write down the rate equation for the voltage across a charging capacitor, this can be written

For $R_2\gg R_1$, it can be seen that we obtain the standard equation for the voltage across a capacitor in series with a resistance $R_1$ as a function of the time.

You can solve this circuit with the same differential equation approach you would for the simpler RC circuit. Just grit your teeth and work through the math. I prefer to work transients problems like this using the Laplace Transform method. The circuit is transformed to the frequency domain, solved, and then inverse transformed back to the time domain. 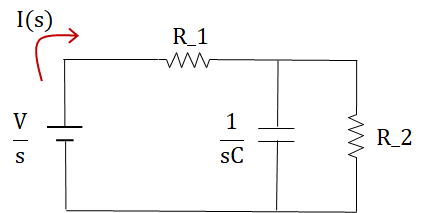 You can work this into a common Laplace Transform pair, or you can reduce it using partial fraction expansion. Either way, you are putting into a form that can be transformed back into time domain. I just used the invLaplace operator in MathCad to get the solution,

If you look at the above it makes sense. Assuming the capacitor is completely discharged when the switch is thrown to connect the battery, the initial current (t=0+) is only restricted by $R_1$ and will be amplitude $V/R_1$. After the capacitor is substantially charged, its voltage will equal the voltage dropped across $R_2$ and the current from the battery will be $V/(R_1+R_2)$.

If are interested in the transient voltage across the capacitor, one approach is to take the $I(s)$ we found above and multiply it times the impedance of the $C$ and $R_2$ parallel combination,

Then carefully work through the math to inverse transform back to the time domain as described above. Doing this in MathCad I get the following for the voltage across the capacitor, $V_C(t)$,

From this you can see that initially (t=0) the voltage will be zero, and after the capacitor is substantially charged it will be $\frac{VR_2}{R_1+R_2}$ which is just voltage division ignoring the fully charged capacitor.

From this you can see that the voltage across the capacitor is initially zero, and eventually 45.455 V.

Not the answer you're looking for? Browse other questions tagged homework-and-exercises electric-circuits electrical-resistance capacitance batteries or ask your own question.

1
Current in discharging capacitor through fixed resistor?
8
Why does voltage change in series circuit but not in parallel circuit?
3
Battery charging a Capacitor
5
Physical interpretation of circuit with battery charging capacitor
1
Basic question about using potential divider to limit capacitor charging voltage
3
Voltage and Electric Field in a Circuit
1
Energy dissipated across a resistor when charging a capacitor
0
Some confusion regarding RLC circuits