Can the average length of the day and night of a planet be different?

At one point in "Marvel's Agents of S.H.I.E.L.D.", some agents are on a planet where the day, defined as the length of time where the sun shines on the planet, occurs only once every 18 years for a couple hours.

Is that a plausible scenario? Can the length of the day and the night be drastically different for a given planet?

Please, do not be afraid to be technical in your answer.

On this hypothetical planet, the "conservation of daylight hours" as he called it seems to be violated. In other words, on earth, when you have long days on a specific location in the northern atmosphere, this is compensated by long nights on a corresponding location in the southern atmosphere. On the planet in question, the long nights/short days seem to be the case for all the planet.

It depends what you mean by day and night. The day and night are not of equal lengths now, where I live at latitude 53N. The tilt of the Earth's rotation axis with respect to the ecliptic plane means that this is generally true.

The situation you describe would have to be considerably more extreme. If the planet was in a highly eccentric orbit and had a very large (close to 90 degrees) tilt of its rotation axis with respect to its orbital plane and the tilt was such that one rotation pole pointed "towards" the star and you were talking about the amount of "day" that was experienced by an observed at the opposite pole, then it could be arranged. However note that there is some sort of "conservation of daylight hours" going on here, since an observer at the other rotation pole would experience almost continuous daylight (albeit that in a highly eccentric orbit, the daylight would be very dim for most of the planet's year) with a brief period of darkness.

I know that the opposite could happen. There is an old book called "Night Fall" about a planet that had three stars. Because there was always a star shinning on all sides it would never get dark. About every 500 years everything lines up just right so that all the stars were on one side. Then as the planet rotated on its normal spin, night fall would come for the first time that anyone had ever seen. The opposite could happen but I think a lot more things would need to come together and in a different way. I know it would need to involve other bodies (planets or moons) the opposite of multiple stars. Or maybe its something as simple as a dark planet that has no star and every 18 years some other heavenly body shines on it from a distance.

If planet is going around some star, at least somewhere at the surface of this planet is going to be a day, or else some other celestial body is covering the star light.

So, by clever tilting the planet and arranging its rotation speed around itself and around the star you can achieve that there'll be a day only several hours in 18 years at some precise spot on the surface of the planet, but in all other places of that planet there'll be night at that time and vice versa.

If you add another celestial body into equation (like two humongous moons as in the show), you can achieve that for larger portions of the planet (as in the first Riddick movie "Pitch Black") but there'll always be at least some parts which are under sunlight or we're talking about enormously large shadow from something larger than planet itself.

One scenario where a planet could have a much longer night than day would be the case if it were in a large elliptical orbit with a large companion, and were additionally tidally-locked to that companion. If the planet in question were to advance its periapsis in lockstep with its year, then the planet could have a long period of being distant from its companion, during which one side of the planet faces the sun (and may be in the companion's shadow), and a short period during which it swings around and gets some sunlight on the 'far side' from the companion.

This would be an exaggerated Molniya orbit, almost perpetually eclipsed by the large usually-inferior companion to which it is tidally locked. Kepler taught us that the planet will linger in the distant, shadowed position from the companion, and sweep past the apsis very quickly. 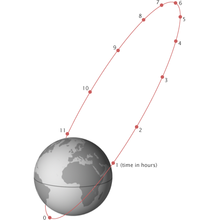 With the masses involved, I would prefer to call your "planet" a "moon" but that is a matter of semantics, especially if we consider that a preferabe primary for such a situation would be extraordinarily not dense, to be larger and cast a larger shadow. Moons can be very hospitable to life.

Take the definition of day to be sunrise to sunset, that is all the time that any part of the star is visible from the point on the planet.

Given that the diameter of the star is greater than the planet, there is slightly more day than night. (Draw the two lines that are tangent to 2 circles, a larger circle and a smaller circle exterior to each other.) The closer the planet is to the star the bigger the effect.

If the star was smaller than the planet, like a planet orbiting a neutron star (diameter of only 20 km), then geometrically night would be more than day. So a very large planet orbiting very close to a very compact star would maximize night. PSR J1719-1438 b is about 1000 times the radius of its neutron star and orbits at a distance of less than 1 solar radius.

One way to achieve different lengths of day and night would be to redistribute momentum of rotation on a scale of hours.

It is well known that large tropical storms have so much momentum of rotation that they have a measurable effect on the length of an Earth day (albeit too tiny for humans to notice).

Now start thinking big. Planets with mighty storms (way more massive than Jupiter's Great Red Spot) that form and dissipate quickly (although normally, lifetimes of storms tend to increase with dimension). What if through some process a metallic metal core would spin up and down?

If a "dam" the size of a mountain range broke and let millions of kubic kilometers of molten lava flow into a sea bed 100km deep, it would at least once change the day/night ratio by spinning up the planet.

Not the answer you're looking for? Browse other questions tagged astronomy planets rotational-kinematics or ask your own question.

3
How do the day/night temperature variations of moons compare to those of their planets?
11
Why is the solar noon time different every day?
4
What day/night cycles, climate and seasons would experience Alpha Centauri Bb inhabitants?
5
Length of day of a gas giant
0
Day/night cycle in Greenland
1
Mercury's rotation, Disturbation's caused by thermodynamics
1
Current length of the solar day?
3
Are night and day lengths over a year equal everywhere on earth?