Length of day of a gas giant

How can the rotational speed, or the length of a day be determined or estimated in a planet which is composed entirely of non homogeneous fluids? There must be internal forces (pressure gradients, Coriolis, and others) that move the gases around, so what do they use as a point of reference in a planet which has no solid or fixed surface?

Planets, whether gaseous or solid will rotate about an axis essentially because of the angular momentum they have from their time of creation.

Angular momentum is conserved if there are no interactions, like moons which generate tides etc, and if no mass is ejected or falls in, so that rotation period will be constant with slow changes depending on the dynamics of the neighborhood and the density of space gas.

A planet can have any angular momentum so to determine its day/night cycle one has to measure it. On a solid planet with a telescope one can sight a mountain or a caldera and watch it come around again. Then the cycle is known.

In a gaseous planet this is not as easy. If there are stable storm centers in the gas, for example, ( as there are sunsposts in the sun) one can measure the return of such formations, as is being done for Jupiter, which is a gas giant.

It is not calculations, it is measurements. 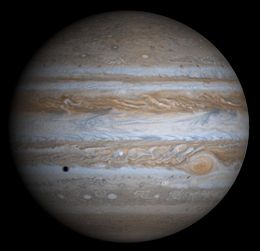 What the internal motions are might be calculated with various models using the observable surface features for verification, and then corrections might apply to the measured period due to the motion of the storm centers and other features.

Magnetic fields, mostly. Without a spacecraft orbiting or flying by to directly measure, it's up to radio astronomers to detect any variations in synchrotron radiation or other effects caused by varying magnetic fields, if on a time scale not too different from any visible cloud features appearing in telescopes. If no radio signals, then it's just a rough average of the main visible cloud features, in which case there might not be any one number given.

This is indeed a nontrivial measurement. Jupiter, for instance, rotates differentially: different bands of clouds at different latitudes rotate at different speeds. From wikipedia:

Because Jupiter is not a solid body, its upper atmosphere undergoes differential rotation. The rotation of Jupiter's polar atmosphere is about 5 minutes longer than that of the equatorial atmosphere; three systems are used as frames of reference, particularly when graphing the motion of atmospheric features. System I applies from the latitudes 10° N to 10° S; its period is the planet's shortest, at 9h 50m 30.0s. System II applies at all latitudes north and south of these; its period is 9h 55m 40.6s. System III was first defined by radio astronomers, and corresponds to the rotation of the planet's magnetosphere; its period is Jupiter's official rotation. [67]

Not the answer you're looking for? Browse other questions tagged homework-and-exercises astronomy planets or ask your own question.

2
How can I visualize a gas giant?
3
Does the length of the sidereal day vary systematically?
1
Optimal selection of generalized coordinates in Lagrangian system
22
Can the average length of the day and night of a planet be different?
0
Rotational velocity necessary to make apparent weight equal to "real" weight?
0
Winds on gas giant planets: Would they increase if closer to their star?