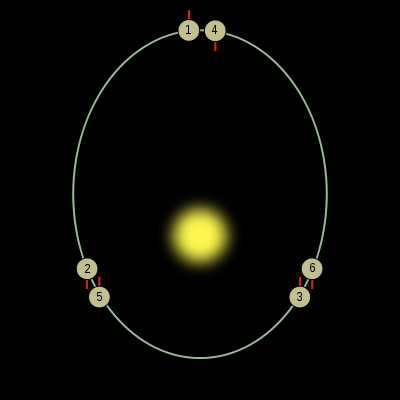 It's said that this synchronization is caused by eccentric orbit, as it has the most eccenttric orbit of all planets. But my question is, how does the thermal expansion influence on the gravity center of Mercury, and its orbit? (The G measurement on picture below) 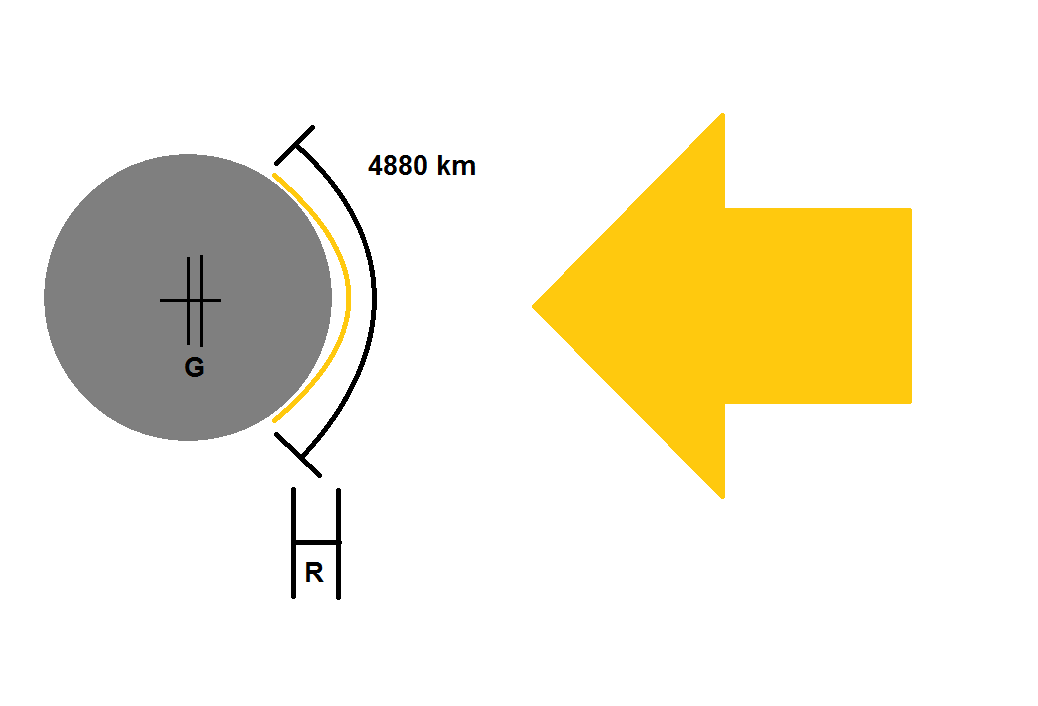 We could also calculate the depth how far the temperature causes this expansion. For this we need the thermal concuctivity, for basalt it's in order of 2 W/mK, its Spesific heat is in order of 1 kJ/kgK. this means that the max radiation power of 14500 W/m2 cant be absorbed; with maximum Temperature difference of 600 K, only 1200 W can be transferred to stone through conductivity, and as the distance grows, even less. So it's not Probable that surface would be heated very deep at all, through conductivity. This must lead to an exessive overheating of the surface. And it could be the explanation to the High amounts of water related ions like O+, OH−, and H2O+ surprise.

HEY! This is too crazy, the surface is full of craters! Like this biggest crater of the solar system; Caloris Basin It just happens to be positioned on the hottest spot of Mercury, and its diameter; 1550 km means that the impactor should have been 100-150 km in diameter; and thus have an impact energy of might have had an impact energy of 4.32x 10^26 J; It's 715 times more than the rotational energy of the Mercury; I calculated it to be 6.04x 10^23 J

This doesn't sound plausible. Maybe the 1500 km diameter "crater" is the area where the planet melts under the sun?

This question is a part of my Series of Questions;

Uranus, the Physical model to change it's rotation axle

And to be honest, I don't even quite know what I should actually ask! Maybe we need to point the hubble to there the take some video, about the possibly boiling surface? -Unluckily the Hubble forgot his sunglasses to home.

Check out this chart as very rough baseline. Solar energy, even with 88 days of Mercury level sunshine, Wouldn't reach nearly as far into Mercury as you suggest. A few KM, perhaps 10 or 20, but not 4,000. I could back that up with a thermal energy calculation of Mercury's mantle and compare it to annual solar energy it gets hit by, but I'm quite sure my point is correct. Solar heating doesn't reach very deep into a planet's solid crust, even over 88 days. Now if it was a circular orbit and tidally locked, that might be a different discussion.

we use the Thermal expansion coefficient of Sodium, 71 µm/(m·K)

we need evaluate the crusts chemical properties. 29% is Sodium. But Sodium melts at 371 K! Well, This means that it should be at least flexible for thermal changes.

This needs some fixing. Mercury's crust is mostly Silica or Silicon dioxide mixed with Magnesium Oxide and some other elements. Source so for melting point and thermal expansion coefficient, you need to look at Silicon dioxide or magnesium rich basalt. The sodium content isn't nearly what you say it is, besides, thermal expansion is a property of the molecule, not the elements in the molecule. (if you have a source for 29%, please post)

On the thermal expansion of magnesium rich basalt, I'm not an expert in this subject at all, but it's probably pretty low - see here. Silicon dioxide's is 5.6 x 10-7th, or less than 1/100th the expansion of Sodium you posted. It says that in general, the expansion coefficient for oxides is very low.

So, while I agree with you that there likely is a thermal rise on the side of Mercury that faces the sun, it's probably measurable in meters, not even close to 1 KM much less 138 KM.

There's also likely a tidal bulge on Mercury that follows the sun. I found several references to that but couldn't find any estimates to how high it was. My guess is that the Tidal bulge is bigger than the thermal expansion, but without actual numbers, I'm just guessing.

Maybe we need to point the hubble to there the take some video, about the possibly boiling surface?

Mercury's crust is basically basalt-rock that doesn't melt, even with the sun at high-noon and peak temperatures. Mercury's surface preserves craters very nicely.

Like this biggest crater of the solar system; Caloris Basin It just happens to be positioned on the hottest spot of Mercury, and it's diameter; 1550 km means that the impactor should have been 100-150 km in diameter; and thus have an impact energy of might have had an impact energy of 4.32x 10^26 J; It's 715 times more than the rotational energy of the Mercury; I calculated it to be 6.04x 10^23 J

Velocity is a key factor in object of impact to crater size and with Mercury's proximity to the sun, very high impact velocity certainly possible. Also, I'm not sure what rotational energy of mercury has to do with that. It's entirely possible that Mercury used to have a much greater rotational energy, which slowed over time due to it's proximity to the sun and the solar-tidal effect.

Not the answer you're looking for? Browse other questions tagged rotational-dynamics planets rotational-kinematics or ask your own question.

10
Why is the surface of Venus so hot?
13
Biggest crater in the Solar System
11
Would a rocky planet orbiting so close to a very hot star eventually vaporize?
4
How can core of Mercury be a molten liquid?
4
Why do all the planets and stars in our solar system have such similar average densities?
3
How big a coincidence is the Sun and Moon having almost equal apparent sizes?
0
Winds on gas giant planets: Would they increase if closer to their star?
9
How do mercury tubes keep the period of a pendulum clock constant with temperature?