How is isothermal expansion/compression physically possible when it assumes heat flow between equally hot bodies?

An ideal Carnot engine is composed of two reservoirs and a working fluid. The hot reservoir and the cold reservoir have temperatures $T_1$ and $T_2$ respectively, with $T_1>T_2$. The working fluid is in a phase transition and has temperature $T_1$ at the start of the Carnot cycle. It undergoes another phase transition at $T_2$ at the end of the cycle to return to its original state.

This is a P-V diagram of the Carnot cycle which proceeds in four steps: 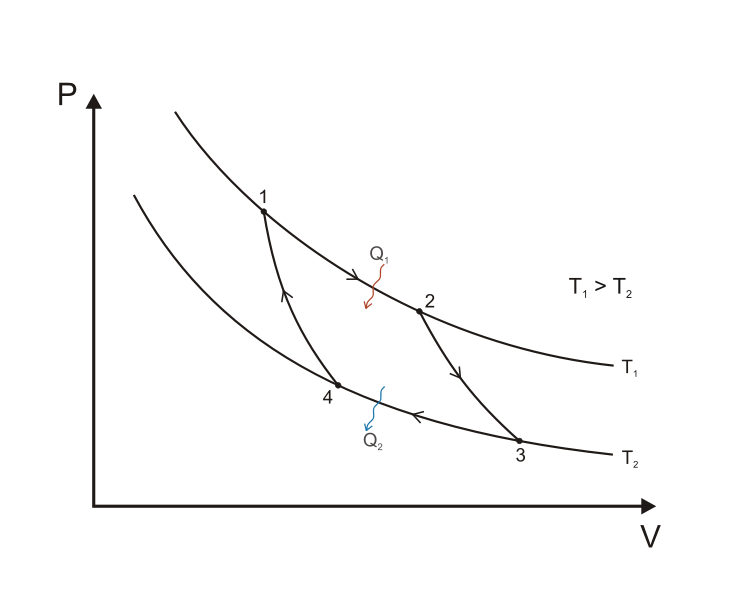 I'm particularly interested in the two stages (from 1 to 2) and (from 3 to 4). They can be described as follows:

1) Stage (from 1 to 2) is a reversible isothermal expansion of the working fluid to transform from the liquid state to the gaseous one. The working fluid is at $T_1$ and it happens to have boiling point at $T_1$. Hence, heat $Q_1$ is supplied to the fluid from the hot reservoir until it transforms to a gas keeping its temperature constant along the whole process. (That the fluid's temperature is constant during the whole process is owing to it being in a phase transition.)

2) Stage (from 3 to 4) is a reversible isothermal compression, and it's similar to what we have just described, with the difference being in this case, heat $Q_2$ is drawn out of the fluid and transfers to the cold reservoir, and the fluid transforms from gas to liquid retaining a constant temperature of $T_2$ throughout the whole process.

I'm puzzled by the mechanism by which the working fluid undergoes phase transition. So, at stage (from 1 to 2), both the fluid and the hot reservoir have the exact same temperature, so that they're in a thermal equilibrium. Hence, there should be no heat or energy exchange between the two bodies. The same can be said of stage (from 3 to 4).

So how is it possible for heat to flow from two bodies having the exact same temperature?

The correct answer is given by @hyportnex. The temperatures of the reservoirs and the system temperature are not exactly the same. They are infinitesimally different so that the system and reservoirs are in thermal equilibrium throughout the process. In any case the cycle is not for a Carnot cycle involving two phases (liquid-gas). Phase transition generally occurs at both constant temperature and constant pressure.

The diagram below shows a PV diagram for a 2 phase Carnot Cycle. Note the pressure is constant during the isothermal phase changes. 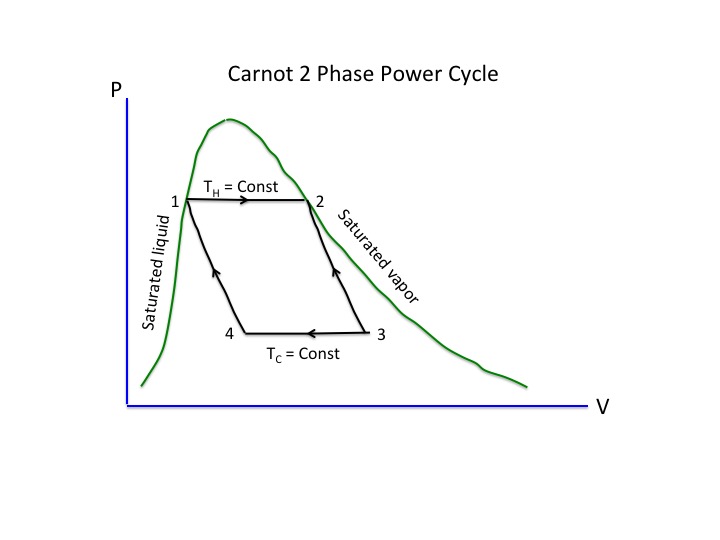 On a related matter, the question is mixing up two concepts which do not need to be mixed. These concepts are:

Likewise, in 3-4, the reservoir and fluid are losing heat to the environment, and the temperature would be falling if not for the release of energy of fusion.

-1
Question about Working of a Carnot engine?

0
Proving the following cycle is equivalent to Carnot cycle
1
Why doesn't the heat in the two isochoric processes count towards efficiency calculation in Stirling cycle?
3
Heat transfer in the isothermal expansion in the Carnot cycle
0
How can this heat engine be considered a reversible process?
0
Why only isothermal and adiabatic for Carnot engine?
0
Carnot heat engine at maximum power
1
Confusion with Carnot Cycle Problem
0
What's the relationship between the Carnot Cycle and Hurricanes? (and more)
0
Entropy change in a Carnot cycle
0
Question regarding Heat transfer in Carnot Engine