Proving the following cycle is equivalent to Carnot cycle

I want to investigate whether the following cycle I'm about to describe is equivalent to Carnot cycle or not. By equivalent I mean, giving two reservoirs($A$,$B$) with temperature $T_1$ and $T_2$ with $T_1>T_2$, and a working fluid, and a heat supply $Q$, in one cycle the mechanical work produced by the cycle which I describe and the Carnot cycle are exactly the same.

The cycle proceeds as follows:

1)The piston at the start is at position $cd$ with the working fluid confined in the region $abcd$ with temperature $T_1$.

2)The fluid is expanded isothermally through contact with body $A$ which has the same temperature $T_1$ as that of the fluid, during which the piston moves from $cd$ to $ef$.

4)The fluid is compressed isothermally through contact with body $B$ which has the same temperature $T_2$ as that of the fluid, during which the piston moves from $gh$ to $cd$.

5)Body $B$ is removed and the fluid is compressed adiabatically from $cd$ to $ik$ and it's temperature increases from $T_2$ to $T_1$.

6)The fluid is expanded isothermally through contact with body $A$ which has the same temperature $T_1$ as that of the fluid, during which the piston moves from $ik$ to $cd$; So that the gas gets back to its original state once again.

Here's a P-V diagram of the cycle I just described: 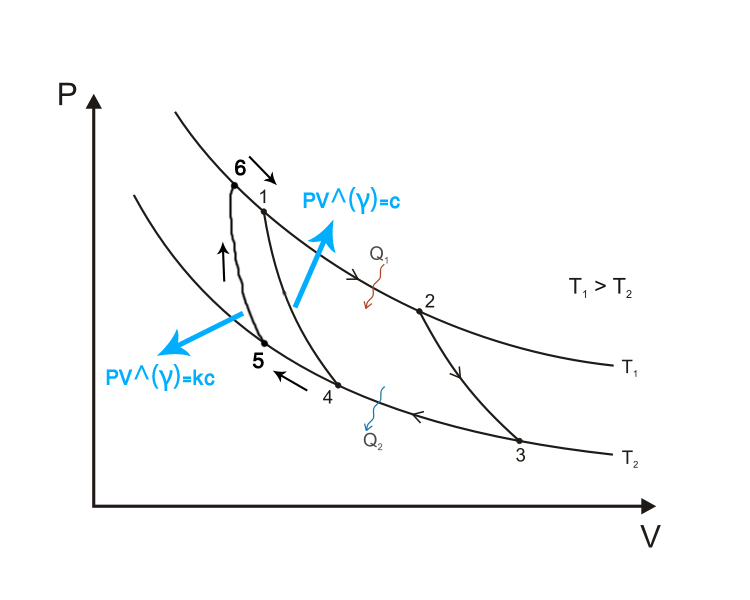 It differs from the Carnot cycle in the following:

Carnot cycle starts from 1 to 2 to 3 to 4 then it takes the adiabatic path from point 4 to 1. On the other hand, the cycle I described, starts from 1 to 2 to 3 then it isothermally compresses the fluid until it has the same volume it had at the original configuration(at point 5); where $V_1=V_5$. Then it adiabatically expands to point 6 and isothermally contracts to point 1.

The reason/intuition that drives me to say those two cycles are equivalent(which may turn out to be wrong):

1)This cycle utilizes heat to the greatest efficiency; since every single change in temperature was accompanied by change of volume; that is there's no change of temperature owing to heat exchange between two bodies in contact; since this condition is satisfied therefore this cycle achieves maximum work.

2) Also this figure and cycle is the one described by Sadi Carnot in his Reflections on the motive power of fire, and he states it has maximum efficiency, so on should expect this is equivalent to Carnot cycle.

So is this the case? are this engine and Carnot engine equally efficient?

What you describe is the Carnot cycle. It just starts partway between point 1 and 2.

If you relabel the points on your graph 6->1 5->4 and erase the original points 1 and 4 then it is the same as an unmodified Carnot cycle, the fact that your start point is partway along the top curve makes no difference to the efficiency.