How does a 1,000 mph car maintain vertical stability with tiny front wings?

Formula 1 cars have wings to help keep them on the road during cornering, they don't need them whilst moving in a straight line. And that's ok , they "only" travel at 220 mph.

In a different speed regime, at 1,000 mph, the Bloodhound SSC has small canard type wings about a quarter way down from the front. Reduction of drag is the aim here obviously, so keeping the wings as small as possible is important. 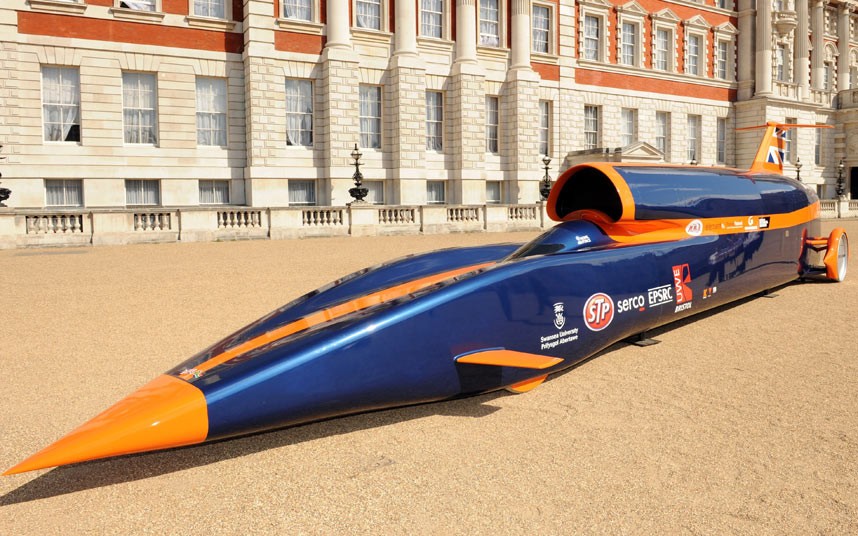 I am well aware I am second guessing all of the BloodhoundSSC.com experts here, but at 1,000 mph, the slightest bump has the potential to turn a small upward displacement into a complete flip over.

I have very little knowledge of this area of physics, apart from basic aviation based practical knowledge and I would really appreciate knowing how you go about determining the correct aerodynamic tradeoffs that are involved.

The references cited above don't go into much detail, otherwise I would not ask this question, and I certainly don't expect a fluid dynamics course, just a short outline of how this situation would be dealt with.

First, you should be aware that while normal racers need a good deal of downforce, it is used to increase tire friction and allow tighter turns. The Bloodhound, by contrast, is not intended to turn at all when at speed - ideally the driver would never turn the steering wheel. It just gets out on the track, gets up to speed, clocks the necessary distance, then slows down, all in a straight line.

Second, aerodynamics has been figured into the vehicle design, but in a sense the vehicle makes the problem easier than it might be. At 7 tons and a fairly small area it really doesn't want to fly, although admittedly supersonic operation will give it some opportunity. However, consider that the center of thrust of the jet engine is, from pictures on the website at least 4 1/2 feet off the ground. While this would cause real stability problems if the beast really were trying to turn at speed, it has the effect of producing a torque that pushes the nose down as long as thrust is being produced. Presumably braking is performed mainly by the rear wheels to produce similar torque at the end of the run. And the vehicle doesn't have the problem of a large hull to generate the sort of lift that kills hydroplane racers.

Third, operation will be on a playa in S. Africa. Like the Bonneville Salt Flats in the US, a playa is extremely smooth and flat, so the likelihood of the nose pitching up is small.

With all of that said, I wouldn't want to be providing life insurance to the driver.

4
How much lift does an airplane get from its wings, vs the rest of the airframe?
3
How does one make a particle with particular wavefunction?
1
How does an aeroplane maintain balance during maneuvers?
0
How does a Venturi Injector comply with energy conservation?
1
Can dynamic viscosity be measured directly and without knowing fluid density?
0
How does the air flow behave when one puts fans in front of/beside each other?
0
How does MRT Lattice Boltzmann improve stability compared to BGK collision operator?
1
If mass is doubled, how much more power is needed to sustain the same speed?
69
Why does water falling slowly from a tap bend inwards?