How Joule-Thomson coefficient is measured experimentally?

That is we are taking the derivative of temperature with respect to pressure at constant enthalpy. But from my understanding this coefficient will be different for different isenthalpic curves. According to Atkins:

The property measured in the experiment is the ratio of the temperature change to the change of pressure, ΔT/Δp. Adding the constraint of constant enthalpy and taking the limit of small Δp implies that the thermodynamic quantity measured is $\left(\frac{\partial T}{\partial p}\right)_H$, which is the Joule–Thomson coefficient, μ. In other words, the physical interpretation of μ is that it is the ratio of the change in temperature to the change in pressure when a gas expands under conditions that ensure there is no change in enthalpy

Does this mean that pressure drop must be infinitesimal?

Suppose an experimenter wants to find $μ$ for a real gas. The setup will be according to Atkins the following: 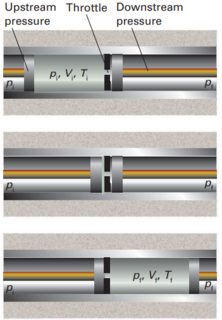 Initially the gas is in the state $p_i, V_i, T_i$ with the porous plug (another thing I can't get) blocked by the right piston. Now how the gas expands? I mean does the experimenter leave both pistons and because of pressure gradient (force gradient) the gas move to the area of lower pressure? Then he calculates the temperature change and taking the ratio he finds $μ$. But how does he know in which isenthalpic curve this Joule-Thomson coefficient corresponds? 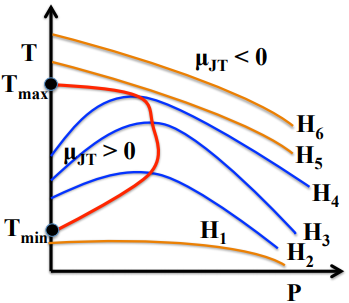 Also the initial pressure matters because the derivative is evaluated at a specific $p$. In general (at constant $H$) $μ=f(p)$. So for the same pressure drop but different $p_i$ we shouldn't expect the same temperature drop. How an experimenter takes into account the above in order to find $μ$?

So to sum it up my question is how an experimenter measures the Joule-Thomson coefficient for a gas. Also I would be grateful if someone could explain what is the role of the porous plug. I am an undergraduate Chemistry student so unfortunately I don't have a theoretical background in fluid mechanics/dynamics. I am disappointed because although I can get the maths I don't understand this experiment which I could say seems very simple. I have spent a lot of time trying to understand the device/experimental setup but didn't make it.

As far as the porous plug is concerned, what is your guess as to its role?

Not the answer you're looking for? Browse other questions tagged thermodynamics experimental-physics gas or ask your own question.