Is ordering players by height beneficial in a game of tug of war?

This can be considered a follow-up turn-around question for this similar question.

I recently came across this interesting analysis of the game of tug of war.
One of the closing discussions is the following image: 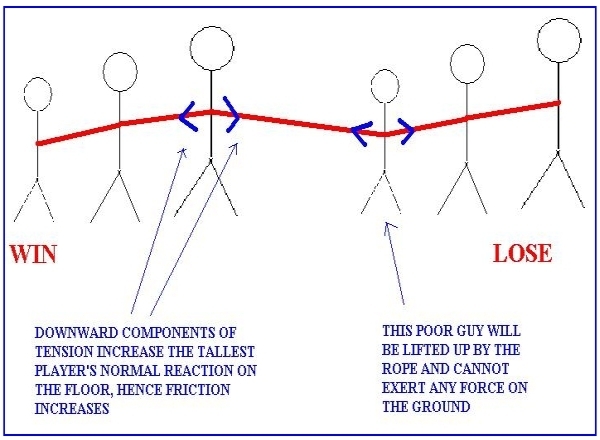 However, the writer follows up that:

[Given there are multiple people on both teams,] the drawing above shows that the shorter players on the left team also experience an upward component of force, and therefore the friction on their feet is reduced. The shorter player on the right team certainly experiences decreased friction, but the other players on the right team have increased friction at their feet.

How do all the forces add up? Is it beneficial to put taller people first in a game of tug of war as shown in the diagram above, or do the forces cancel each other out?

For calculating the total force a team can generate, it is useful to consider one team as a single system. Note that the total normal force of a team acting on ground only depends on the total mass of the team and the vertical component of tension force of the rope between the teams. You can't do much to increase the team's mass, however you indeed can generate downforce (and upforce for the other team) by putting the tallest closest to the other team (perhaps also the tallest could try to lift the rope even higher, though I'm not sure it will help in practice. The friction force generated by real people is not purely proportional to the normal force).

The drawing has it completely wrong, because it doesn't take into account the leaning that players do. Leaning is beneficial to the team, because it allows you to use gravitational force as well as your muscles to pull the rope and removes the height differences in the rope that would put shorter players at a greater disadvantage than they already have (taller players lean more, shorter ones lean less). Since taller people need a lot of space behind them to lean properly, it is beneficial to the team to have tall people in the back and short people in the front.

13
Does it matter how you order your tug-of-war participants?

1
In a game of tug of war, what concepts are involved in determining where the rope breaks?
0
What would happen if a ball flew through the open window of a car?
0
Length of Rope in Tug Of War Matter?
3
How to gradually calculate deceleration to reach velocity = 0?
1
Question regarding tug-of-war and tension