Why do crystals grow in preferred directions?

I want to know why snowflakes (and other crystals) grow symmetrically and I find the leading answer to the established question to be entirely unsatisfactory.

Nature adds one water molecule at a time. The molecules always try to choose the most energetically favored position on the frozen body. Because these laws of creation of a snowflake are symmetric with respect to the rotational symmetries, it follows that any symmetry that exists at the beginning - a hexagonal symmetry of a small number of molecules in the initial crystal - will be preserved.

No, sorry, it doesn't follow at all. Something hugely important is missing from this answer -- causality. 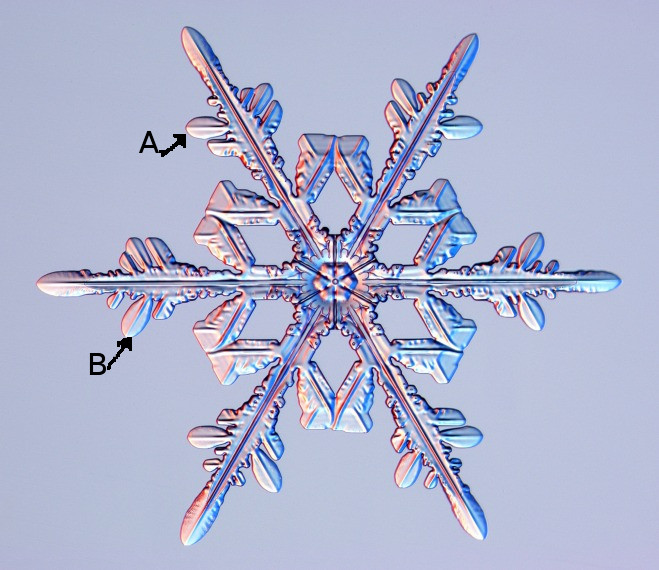 Even considering theo's remarks about dendrite growth, why don't we see this? 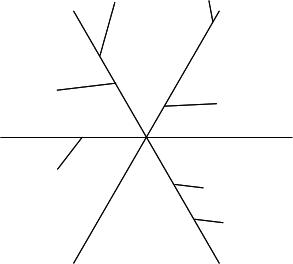 I see absolutely no reason why any given additional water molecule cannot land in an energetically unfavourable position. Besides, if low energy considerations were a driving force, snowflakes would be approximately spherical.

So, what's really going on? How can a bump at A create an attractive force at a distant B?

Broadly speaking, the reason why a snowflake forms a flat crystal with 6-fold symmetry (as opposed to a sphere) is due to a combination of the underlying symmetry (order) of the ice crystal and a dynamic instability (chaos) resulting from the non-linear phenomena of solidification and dendrite formation as a function of temperature and humidity variations in the atmospheric clouds.

Each snowflake is a crystal which grows out from a central nucleus of ice which has a 'hexagonal' symmetry. The simplest 'snowflake' is therefore a hexagonal prism.

When molecules of water 'adhere' to the surface of the crystal, the non-linear combinations of humidity and temperature create conditions in which flat surfaces are inherently 'unstable'. As the crystal tosses and turns in the atmosphere, water molecules solidify on tiny 'bumps' like the corners of the hexagon crystal so that these 'bumps' grow faster than the adjacent 'flat' regions, thereby forming long 'needle' like structures. As the 'needles' get bigger, any small irregularities along the edge become unstable and water solidifies on these to form 'branch' like structures. The tendency is for the needles to grow from the rectangular 'prism facets' rather than the hexagonal facets, thereby resulting in snowflakes with a flat shape rather than a 'spiky ball'. A detailed description can be found in this paper on "the physics of a snow crystal"

Because the snowflake is very small and temperature and humidity vary relatively slowly, the conditions for solidification of the water at a given point on the crystal will be the same at the 6-fold symmetrical points, so that the snowflake 'grows' symmetrically. In this way, smaller needles grow on previous needles to form a flat-plate with 'tree-like' structures (dendrites) around the a hexagonal prism nucleus in a 6-fold symmetric manner.

According to Professor Ian Stewart of Warwick University, author of "what shape is a snowflake?":

An ice crystal grows when molecules of water adhere to its surface. Certain combinations of humidity and temperature create conditions in which flat surfaces are dynamically unstable, an effect called the Mullins-Sekerka instability. In these conditions, if a flat surface accidentally develops a tiny bump, the bump grows faster than other nearby regions, amplifying the irregularity. A big enough bump is nearly flat, and becomes unstable for the same reason, so new smaller bumps proliferate. This process of repeated ‘tip-splitting’ leads to a fernlike pattern known as a dendrite. Dendritic growth causes the enormous variety of shapes seen in snowflakes, because the branching patterns are extremely sensitive to slight changes in humidity and temperature.

An lecture on the topic of mathematics of patterns and symmetry accessible to the layman can be found on Youtube. In this video (from minute 3:00 to 15:00), Ian Stewart gives an excellent introduction to the formation of symmetry within the snowflake. 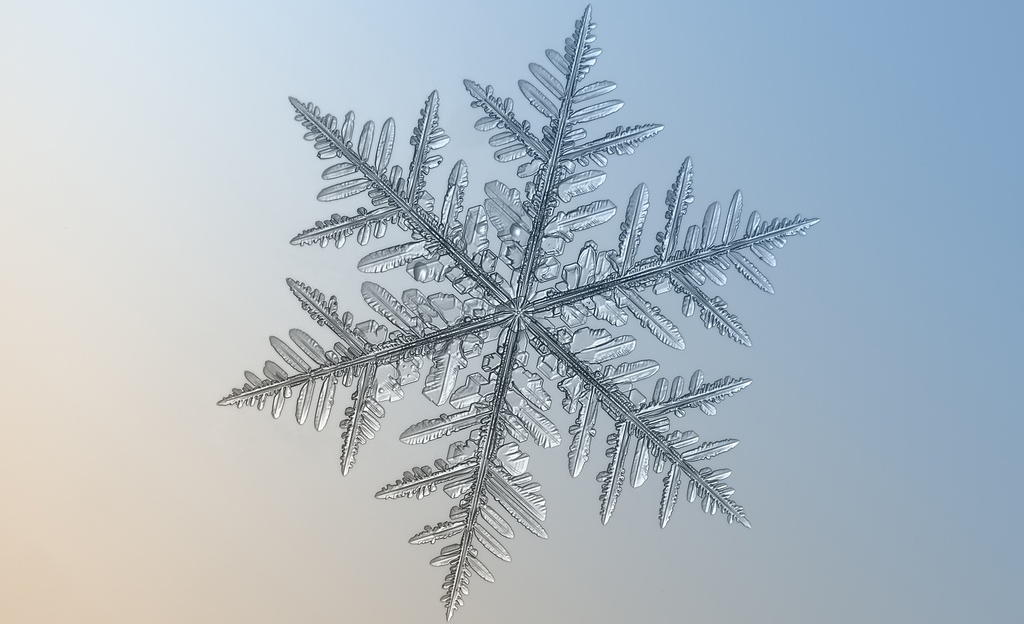 A detailed description of the Mullins-Sekerka instability and the remarkable phenomena responsible for the formation of these beautiful patterns in snowflake crystals can be found in this paper by J.S. Langer.

But we do see exactly the kinds of asymmetries that you're asking about, even in your sample image. Here it is again, with some more letters and arrows: 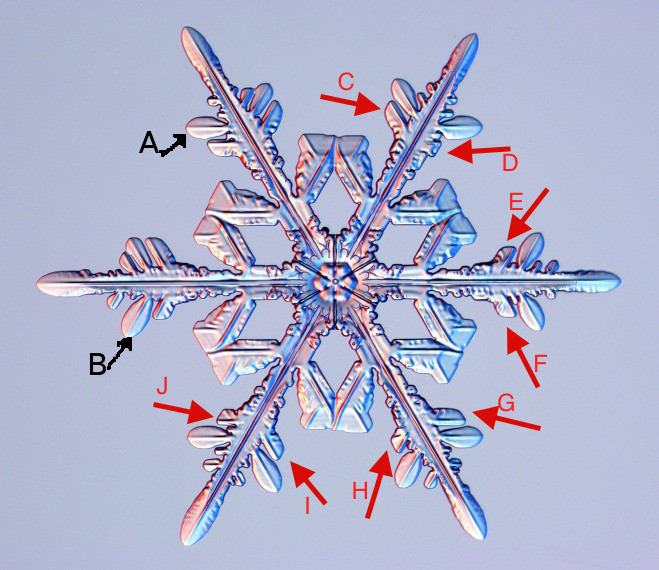 If the ice crystals are more or less confined to a plane, you expect the crystal to be symmetric under rotations of 60º (one-sixth of a turn) and reflections about six axes in the plane. That's clearly approximately true for this snowflake. But look at the second biggish lobe on each long arm.

If I had better image manipulation tools and a lot of free time I would overlay rotated and reflected images on each other to make the differences more obvious, but I think you should have the point. The asymmetries are there, but they are smaller than you expected. And there's a strong bias towards publishing photographs of exceptionally symmetrical flakes like this one. Libbrecht, who may have taken that image, puts it nicely:

If you think this is hard to swallow, let me assure you that the vast majority of snow crystals are not very symmetrical. Don't be fooled by the pictures -- irregular crystals (see the Guide to Snowflakes) are by far the most common type. If you don't believe me, just take a look for yourself next time it snows. Near-perfect, symmetrical snow crystals are fun to look at, but they are not common.

Even on the best of days, I search for hours to find just a few beautifully symmetrical specimens. I typically glance over thousands of crystals on my collection board before selecting one to photograph, and the pictures you see in the Galleries are some of the best among over 7000 pictures I've taken.

That's been my personal experience looking at actual snowflakes as well.

Not the answer you're looking for? Browse other questions tagged water crystals ice or ask your own question.

0
can ice crystals be molded into a structural shape in space
8
Why does warm water sink?
30
Why are snowflakes flat?
7
How can such a mushroom ice shape grow from a water fountain?