Why are snowflakes symmetrical?

The title says it all. Why are snowflakes symmetrical in shape and not a mush of ice?

Is it a property of water freezing or what? Does anyone care to explain it to me? I'm intrigued by this and couldn't find an explanation. 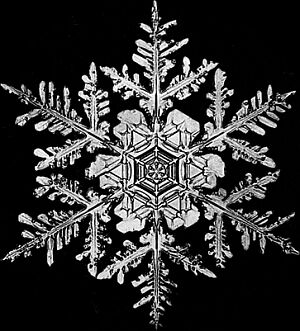 But what about a snowflake?

A snowflake differs from a big chunk of ice by its being small. Even more importantly, it is in the process of growing. You should think about the process in which the snowflake was created.

Well, the water molecules are added to the crystal because it's energetically favored: vapor turns into ice - and you need vapor to create snowflakes because liquid water freezes differently.

Nature adds one water molecule at a time. The molecules always try to choose the most energetically favored position on the frozen body. Because these laws of creation of a snowflake are symmetric with respect to the rotational symmetries, it follows that any symmetry that exists at the beginning - a hexagonal symmetry of a small number of molecules in the initial crystal - will be preserved. It's pretty much inevitable that all the arms are growing approximately equally, so the initial symmetry group is preserved and becomes a symmetry of a macroscopic object.

The more difficult question is actually why the snowflakes are so diverse and beautiful. Most likely, it is not an accident that they achieve one shape or another. Changing pressure, temperature, or humidity as a function of time changes the conditions that determine the optimal places where the new vapor molecule should be added. But even if pressure, temperature, and humidity depends on time, the hexagonal symmetry is still maintained.

K Libbrecht has a nice paper that answers your question in considerable detail and has some nice pictures-- his homepage: http://www.its.caltech.edu/~atomic/publist/kglpub.htm Scroll down to the article in American Scientist in his publications list "The Formation of Snow Crystals," K. G. Libbrecht, American Scientist 95, 52-59 (2007). View pdf.

the pdf is here

Not all snowflakes are symmetrical. One can disrupt the symmetry quite easily by introducing impurities or some mechanical artifact. In nature, snowflakes have plenty of time to form and it is more natural for them to form symmetric shapes because of the molecular structure of water.

That is, when there is more time for the molecules to move about and position themselves they will do so in a way that is in accordance with some crystalline structure that the molecule can exhibit.(you can use other things besides water to get "crystals")

The nature of the shape depends on many many factors but to see that such diversity can come from something simple you just have to look at IFS's. Basically you take some very simple rules and generate a huge number of variations by making small changes in the rules.

Not quite an answer but the first attempt to explain the shape was published by astronomer Johannes Kepler in 1611, the original is in Latin - "Strena Seu de Nive Sexangula" (A New Year's Gift of Hexagonal Snow). There is an English translation ("The Six-Cornered Snowflake") available at Amazon and elsewhere.

My understanding is that there are two processes in operation in sequence, first there is a random process of one H2O attaching then a second process where the energy balance requirements over the entire crystal limit the allowed attachment points and this causes the symmetry, once all the valid points are filled the energy is balanced and a new random place on the entire crystal edge can accept a molecule. They are a form of automata, and I speculate that the rules are embedded in quantum physics.

Natural snow crystals are symmetric in shape because they are charged and several properties of the electromagnetic field act to keep them symmetric. You can learn more about by reading my paper available now on Research Gate/Roald Schrack

3
How does a snowflake “know” to form symmetrically?
29
Why are snowflakes flat?
16
Why do crystals grow in preferred directions?

14
Thermodynamics of supercooled water
3
Freezing point depression - cooling my drink with the same method as salt on a highway?
3
Why is ice less dense than water?
16
Why do crystals grow in preferred directions?
3
Do sodium chloride(ions) melt the ice or not?
51
Why is ice made from boiled water clear?
3
Does water expand uniformly in a rigid container that is open on one end?
0
Can water in solid state (ice) be at such a low temperature that in contact with liquid water at 0, freezes it and leaves it at a lower than zero C°?