An electron-positron annihilation can produce a pair of gamma rays.

In the reverse process, known as pair production,

Once the gammas are produced, they do not carry particular information. There is just a certain probability, measured by a differential cross section, that, if they scatter again, they produce $e^+,\,e^-$ as in the initial pair. 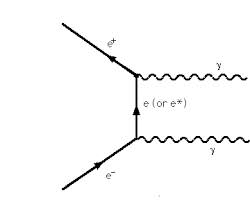 Now the probabilities of interaction come from the prescription for Feynman diagrams and two photons are indistinguishable in this calculation. They do not have "memory" of the initial two particles other than the angular distribution, a probability plot, computable from the diagram. The diagram can be read and is valid for calculations in reverse time.

I cannot understand what you mean by reversible. If you mean can two photons scatter off each other and produce an electron positron pair, yes, one could compute the probability amplitude for that. Usually this happens often in detectors with the second gamma a virtual one from the field of an atom or a nucleus.

If you mean the two original gammas of e+e- annihilation, they will never meet again as they depart with the velocity of light, and the probability of meeting another one that has come from an e+e- annihilation is very very small unless it is two gamma beams designed to see this ( but why would one want to do that) . They are talking of gamma gamma colliders, but at much larger energies to generate a lot of particles.

Not the answer you're looking for? Browse other questions tagged photons electrons radiation reversibility pair-production or ask your own question.