What would happen if an accelerated particle collided with a person?

What would happen if an accelerated particle (like they create in the LHC) hit a person standing in its path?

Amazingly this actually happened to a Russian scientist called Anatoli Bugorski (WARNING: this is pretty gruesome).

The beam basically just killed all the tissue it passed through. The symptoms were the relatively mundane ones expected from tissue death.

The LHC has a much, much greater energy than the one that struck Bugorski, so it would cause a lot more heating and presumably burning of neighbouring tissue. How much extra damage there would be depends on how rapidly the beam is absorbed, and I must admit I don't know this. The total LHC beam energy is 362 MJ, which is enough to turn 150kg of water at body temperature to steam. If any significant fraction of this was absorbed by your head the resulting explosion would probably not leave much of your head behind.

A charged particle will create charge separation (ionization) along its path. This will cause harmful chemical reactions to occur in the body, including DNA damage. The effects of these chemical reactions depend on their amount. The body can heal from a low amount on its own, while a high amount will cause radiation sickness and probably death.

This can be calculated, but also deduced by comparison.

A single proton from LHC has 4 TeV of energy. This is much less than the probable energy of cosmic rays' protons. 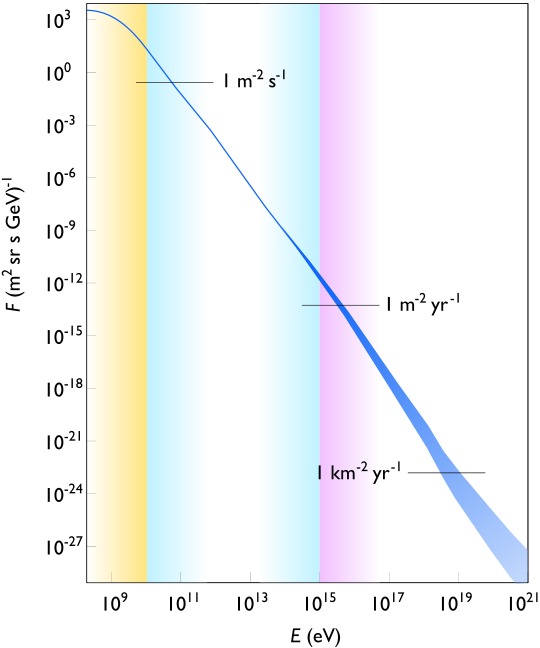 According this plot, approximately four TeV protons hit each square meter each month. Once per year, they are protons of 10E16 eV, i.e. 10000 times harder, than those from LHC.

Cosmic ray protons hardly ever reach Earth's surface but astronauts can be exposed to them. No damage to astronauts from individual protons has been registered. Some astronauts report rare unusual light flashes in their eyes which may be caused by particles penetrating their brains or retinas.

P.S. Also see the answer about BEAMS of particles, which can definitely damage the body.

Nothing happens obviously, when one high energy particle penetrates flesh as cosmic rays continuously impinge on us and some have the energies of the LHC. The cosmic rays reaching us are mainly muons and the damage they do is with electromagnetic scatters/ionisations in their path.

The mean energy of muons reaching sea level is about 4 GeV. Muons, being charged particles, interact with matter by ionizing it.

The high tails of this is comparable to LHC energies, and there are one muon per square centimeter, per minute, per steradian.

At the cellular level DNA can be damaged and mutations in cells might occur. If it happens to be an ovum or a sperm then something drastic may happen to the putative embryo coming from a damaged cell. Generally living organisms have developed repair mechanisms that limit most damage from single cell/particle encounters.

Accelerator beams though with the high number of particles can be killing . This is the story of a survivor with a beam encounter. WARNING: It's pretty gruesome.

While a single LHC particle wouldn't be doing much harm, being hit by the LHC beam would be certainly deadly and it would damage the machine badly. Any dense matter that comes into the LHC beam will instantly act as a beam dump. We have a very good idea about what happens in the LHC beam dump, see e.g. http://iopscience.iop.org/1367-2630/8/11/290/pdf/1367-2630_8_11_290.pdf for a few data points.

Unlike with previous generations of machines, where the beam was sometimes dumped into the air, the LHC beam is contained in a vacuum tube and nobody can cross the beam accidentally. There are, however, many areas around the machine which would cause serious radiation exposure, if people were admitted during operations. Safety is of enormous concern around these experiments.

Not the answer you're looking for? Browse other questions tagged collision particle-physics or ask your own question.

5
Cosmic ray hazards
5
Is it dangerous if one elementary particle with high energy penetrates our brain?
0
What would happen if an incredibly high energy photon passed through a human body?

4
Wouldn't micro black holes in the atmosphere have noticeable effects?
4
Accelerated charges
44
What would happen if Jupiter collided with the Sun?
1
Could we use experimental evidence of micro black holes to prove the existence of additional spatial dimensions?
6
How can a person be hit by a high-energy proton beam?