I am trying to understand the physics behind a single sailed boat. I have read the following questions

Sailing against the wind. Is this a fair model?

I've also been following this explanation which seemed to be helping but I am still confused. Full disclosure: my physics is pretty weak and I've never sailed, but my maths should be sound.

I am (now) aware of the two components that provide the force that moves the boat: The "Newtonian aspect", where the wind collides with the sail and this produces a force and the "Bernoulli aspect" resulting from pressure differences resulting from the air passing around the sail.

(If people think this would be better as two questions, happy to break it down, but I suspect one or both will be silly)

Update: It has been said by @CarlWittoff that the Bernoulli aspect is pretty trivial, so I would like to focus on how the Newtonian part of the force can achieve a force that goes into the wind.

I understand this in the most simplest sense, a sail perpendicular to the wind will produce a force on the boat proportional to the relative wind speed. As the sail is angled in to the wind, you get more "lift" and less "drag" (in plane terms).

In the sailing explanation, it implies that the Newtonian aspect can be used to explain going into the wind. This is also hinted at in the first question. However, I don't understand how this can be. Surely the force applied to the sail, and hence the ship, is always in the direction of the wind. Hence it can never provide a force into the wind. The article seems to suggest you can get away without the Bernoulli effect, but I don't see how. 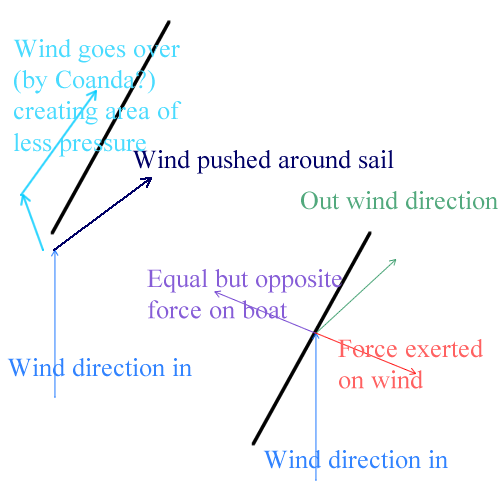 This is my attempt at how this translates into sail. The air is pushed around the sail, which exerts a force (in purple) on the boat. However, I can see no way for this force to be into the wind.

This is the area I am even more lost with. My understanding is that somehow, you can angle the sail in such a way that the air that goes past on one side knows to go faster which reduces the pressure, giving a force. However, I cannot seem to connect that intuition to any kind of applicable formula. Specifically, what determines the direction of the force and what is it proportional to?

I'm trying to simulate a boat for a game and any help on which formulae I actually need to be plugging in would be hugely appreciated :)

However, most sailing boats have a daggerboard or keel under the boat. Essentially this is a big plank under the boat in the water which provides a large resistance to any lateral motion (also helps prevent capsizing). Therefore the net force is forwards. 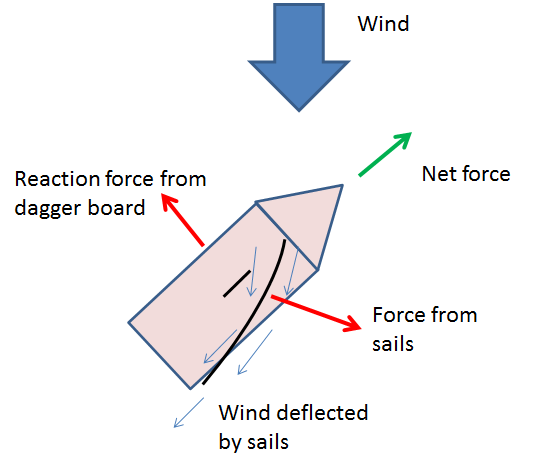 This is pretty much the same in that the force is perpendicular to the sail. The idea is the same as for a plane, ignore the fact that the sail is floppy and missing a part. If anything this strengthens the argument that the Bernoulli effect isn't important. Although I haven't really though about it enough so won't give a definite answer on that.

You mentioned in a comment that you don't see how this allows faster than the wind travel. This is due to apparent wind. Basically the wind swings to the front of the boat and feels faster the faster boat moves.

The easiest way to understand how a sail works is to observe that the sail is curved and when air flows parallel to the surface of the sail it will follow that curve and be deflected backwards. Air comes in from the side and exits toward the rear. Air goes backwards, boat goes forward.

This is the same physics as the following examples:

Sailboats are not magical crafts that obey their own laws of physics. Newton's third law (or conservation of momentum if you prefer to think about it that way) tell you that in order for something to move in one direction you it has to move something else in the opposite direction. Sails deflect air from the side to the rear - air goes backwards, boat goes forward.

Now, this simple explanation only takes you so far. I've used rockets as an example, and the basic concept is simple, but nobody is going to go out and build a working rocket based on what I wrote above. Same with sails.

A more thorough approach involves examining or modeling the air pressures on the surface of the sails. Newton's third law says that if the sail exerts a force on the air, the air must exert an equal but opposite force on the sail. So far, so good, but the only way air can exert that force is through air pressure, or more precisely through a difference in air pressure. Thus, aerodynamics textbooks tend to focus on the pressure distribution rather than stepping back and looking at the overall momentum transfer.

The easiest way to understand why air pressure varies as it does is to examine the following formula:

where dp/dz is the pressure gradient, rho is the density of the fluid, v is the velocity, and R is the radius of curvature. This shows that any time a fluid follows a path that is curved you get a pressure gradient with more pressure on the outside than on the inside. Think of a tornado or hurricane with a low pressure eye and wind circulating around it - this is an example of the formula above .

Unfortunately, the formula above cannot be integrated when trying to solve the differential equations underlying aerodynamics (Navier-Stokes, Euler, potential flow, etc.) so it's given short shrift in the textbooks.

The main effect providing propulsion to a sailboat is the deflection of wind astern the boat.

Close hauled and Boat blowing itself

In the first case, you have a "boat" going forward with all wind on winward and zero wind on leeward side (note the telltales). This dimisses the "different pression theory". Furthermore, if it is a low pressure zone on the leeward of the sail, not only the sail would be sucked by the low, but also all the other air surrounding the low and this would cancel the effect of the low pressure zone on the sail.

Not the answer you're looking for? Browse other questions tagged fluid-dynamics bernoulli-equation or ask your own question.

6
What exactly is the 'lift' of a sailboat as explained by Bernoulli principle
9
Sailing against the wind. Is this a fair model?
2
Computing the force generated by a sail on a boat
0
How do hydrofoils tack without a keel

4
Is the wind's force on a stationary object proportional to $v^2$?
6
What exactly is the 'lift' of a sailboat as explained by Bernoulli principle
2
Computing the force generated by a sail on a boat
16
Why is a beam reach the fastest point of sail on modern sailboats?
0
How do hydrofoils tack without a keel
0
Can Bernoulli's principle fly a car?
0
Sail propulsion (or wing lift) by wind deflection (without Bernoulli principle)?
1
The Forces Affecting a Sailboat