Sailing against the wind. Is this a fair model?

I was ruminating the explanations about how boats can sail against the wind (or "into the wind"), and wondered if one could devise a simple mechanical model without hydrodynamics involved.

Imagine a cart (in red in the figure) that is allowed to move along a straight rail (NE-SW orientation). It has a vertical mast at the center, and we attach to it a panel (blue), like a rigid sail, that is kept at a fixed angle with respect to the rail. The only propulsion is to be extracted from a stream of green balls that are thrown, from the east, and bump against the panel (assume perfect elastic collisions). We want to move the card upwards, in the NE direction.

It would seem that this can be done, by placing the panel in an angle as in the figure, and that by mere mechanical arguments -transfer of momentum- the cart should move upward, "against the balls".

Is this true, and is this a fair model of what happens when "sailing against the wind"? 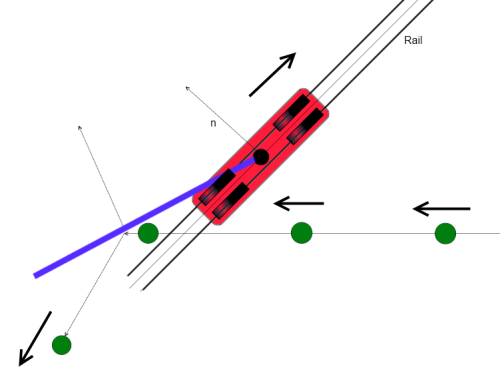 This is a "good" model from a conceptual standpoint. It's the model Isaac Newton himself used when he tried to model the concept of aerodynamic lift. However, modeling air as a series of little balls bouncing off one side of the sail ignores the contribution of the air on the other side of the sail.

A historical note: some folks accepted Newton's analysis at face value and concluded that airplanes were impossible because you can't get enough lift. Fortunately, this wasn't everyone.

Note 2: Yes, Newton got this particular analysis wrong, but Newton's laws of motion still apply. Fluid dynamics was in its infancy when Newton tackled the problem, and nobody's perfect.

Note 3: When people talk about the "Newtonian explanation of lift" they are not talking about this flawed analysis.

ADDENDUM: Forgot to mention that for hypersoinc flight at low atmospheric pressure this model is applicable. For instance, it describes the space shuttle during re-entry quite well. If the air molecules are few enough and the airfoil is moving fast enough we can neglect molecule-to-molecule interactions and concentrate on the molecule-to-wing interactions. But for sailboats (which don't come close to mach 1) at reasonable atmospheric pressure, the 'bouncing balls' or 'skipping stone' model falls short.

It appears to me that cart could move in NE direction "against the balls" but if you consider the transfer of momentum to the ground to which the rails are fixed to, it doesn't violate physical laws. It is like hitting a ball against a wall. Ball would bounce back in exactly opposite to original direction but the momentum transferred to wall is imperceptible because wall is too massive. Similarly in this case, the cart would have moved in NW direction without the rails. But because the rails are there, that impact is transferred to rails in NW direction perpendicular to the rails, and to the ground whose effective mass is too large to see a deformation. The component of velocity parallel to the rails is not transferred to them so the cart can move NE.

However, in case of sailing it is not necessarily the direct physical force of the wind that moves the boat. Differential flow of wind is created on either side of the sail and on one side relatively low pressure develops. The boat is sucked into this low pressure area which could be in the direction opposite to the wind.

The physics of sailing into the wind can be explained using Newtonian mechanics based on the mass flow rate. The sail re-directs a mass of air each second (m/dt) towards the boat’s stern, at a relative velocity (dv) that depends on the apparent wind. The re-directed airflows push against the otherwise undisturbed apparent wind to create a backward force (i.e. Force = ma = m/dt x dv). The reaction generates an equal and opposite forward force that pushes the boat ahead. See image attached. 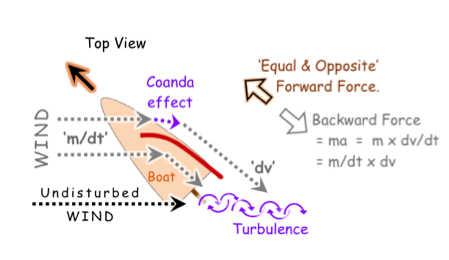 There are two separate airflows as the sail re-directs the wind on the sail’s windward and leeward sides. The leeward airflow relies on the Coanda effect and is sensitive to the sail’s angle-of-attack (AOA). See image attached. 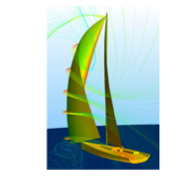 31
Why do ships lean to the outside, but boats lean to the inside of a turn?
10
Problem understanding basic sail mechanics
6
What exactly is the 'lift' of a sailboat as explained by Bernoulli principle
3
Why trimming the mainsail gives a larger torque to head up
3
Can a riverboat use stationary air to tack upriver?

10
Problem understanding basic sail mechanics
2
Computing the force generated by a sail on a boat
0
Using the continuity equation against gravity
0
Are the arms of a hurricane along wind direction?
0
Why cannot static forces on a small scale model be measured in wind tunnel if the model is not rigid?
0
A runner against the wind