Why is a beam reach the fastest point of sail on modern sailboats?

I've heard that a beam reach (perpendicular to the wind) is the fastest point of sail on modern sailboats, but I haven't heard a satisfying explanation of the physics behind the claim.

Triangular sails propel the boat by forming an airfoil and generating lift. With a rigid airfoil, such as an airplane wing, my understanding is that the lift should be proportional to the speed of the air over the foil. That would imply that sailing upwind should be faster, since the apparent wind is greater when sailing against the true wind. At the same time, if one sails into the eye of the wind, the sail loses its shape, and stops acting like an airfoil.

The tension between these two processes would indicate an optimum somewhere in between sailing close-hauled (as close to the wind direction as possible while maintaining sail shape; usually about 45˚ away from the wind) and a broad reach.

We can rule out running before the wind (sailing directly away from it), because then the sail acts like a parachute rather than an airfoil, so the boat can never go faster than the wind (whereas, in an infinite sea of frictionless water with no air resistance, sailing upwind would cause the boat to accelerate forever–much better!)

Also, I suppose one has to consider the direction of the force from the wind. If we can assume that the force of the wind on the sail is perpendicular to the boom (which I'm not quite sure we can), then on a beam reach the forward component of the wind force vector is greater than when sailing close-hauled, where the boom is more closely aligned with the centerline of the boat. Maybe that's actually the most important factor.

Then there's drag from the wind and water, but I'm not sure how much that matters for this particular question… there's also waves to consider, which travel in the same direction as the wind and would thus also favor a beam reach, but let's assume they're not significant.

So, as a layman I'm not sure if my line of thought really holds water (so to speak). Is my thinking correct, and if so, which of the phenomena is mostly responsible for the beam reach being the fastest?

newtonian-mechanics classical-mechanics fluid-dynamics aerodynamics
Share
Improve this question
edited May 10, 2016 at 19:38
Will
asked May 28, 2015 at 18:12

For instance, in very light wind some boats will go fastest on a close reach due to the increased apparent wind from going toward the wind. For boats that sail faster than the wind, the limiting factor for speed is how close they can sail to the apparent wind; when they are going faster than the wind speed the apparent wind is always forward of the beam. A broader angle to the true wind allows them to go faster before their sails are sheeted all the way in, so a broad reach is the fastest.

Check out the polar diagrams on this site:

90 degrees to the true wind is not usually the fastest.

As for why some angles are faster than others, that's a bit complicated and beyond the scope of this answer. Suffice it to say that as you sail closer to the wind the component of lift in the direction of travel is less, plus there's increased drag. So you slow down as you approach a close-hauled course. As you bear away to a run, the sails eventually become stalled and less efficient. Somewhere in between a close-hauled course and a run you'll find the angle of maximum speed, which is sometimes approximately 90 degrees to the true wind but not always.

BTW, I should add that the term "beam reach" doesn't have a precise definition. Some sources say a beam reach is 90 degrees to the true wind, others say its 90 degrees to the apparent wind. Most sources introduce the points of sail before the concept of apparent wind and elide over the difference entirely. For boats that only go a fraction of the wind speed (i.e. the vast majority of them) its not that important a distinction. In the answer above, I've used the true wind definition, but even if you choose the apparent wind definition a beam reach is not always fastest. Boats that go faster than the wind have their sails trimmed to close hauled regardless of their point of sail.

On a beam reach, the boom is out over the side of the boat, and lift from the wind is a vector directed toward the bow, in the direction of travel.

On a close haul, the boom is near the centerline of the boat, and lift from the wind is a vector directed toward the side of the boat, almost orthogonal to the direction of travel.

A close-hauled boat depends on water pressure against the leeward side of the keel to keep it moving forward, rather than being pushed sideways.

On a beam reach, there is less water pressure on the leeward side, and the boat is able to slice through the water with less resistance.

This is a simplification, as actual sailing angles vary, but the higher speed on a reach is due to wind lifting the boat in the direction of its travel rather than pulling it sideways against its direction of travel, as in a close haul.

The fastest course is not exactly perpendicular to true wind, but slightly downwind. The optimal downwind offset is the apparent wind angle that the boat can sail (beta), which is small for efficient boats (15deg) and iceboats (<10deg).

The geometry is explained here: http://en.wikipedia.org/wiki/Sailing_faster_than_the_wind#Maximum_speed_course_sailing_angle

Downwind reaches are much faster - as seen during the last America's Cup.

Simple reason: if the drag on the hull is low, you can get a significant "head wind" which you add to the actual wind vector to give the apparent wind.

This apparent wind needs to be at a "sensible" angle to the boat - enough lateral component that it can still "push" the sail.

The lower the drag on the boat, the further downwind this optimum lies. The AC72 used in the America's Cup reached speeds in excess of 40 knots in a 20 knot wind; at that point the apparent wind angle was 19 degrees although the boat is nominally on a broad reach.

A nice diagram and explanation can be found at https://www.nauticed.org/sailing-blog/americas-cup-apparent-wind/ 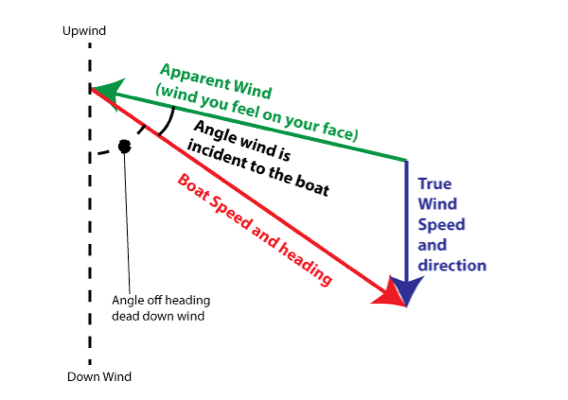 I think this is easiest to understand if you make a simplifying assumption. Forget about airfoils and such. Think of the centerboard of the boat as a kind of skate, unable to move sideways, but able to move forward or back with almost no resistance. (Like an ice-boat.)

Similarly think of the sail as something that can move forward easily in the air, but not sideways, as if the air were a substance like jello, and the sail were a knife. In that situation, the boat acts as a link between the air and the water, in the sense that if the boat travels forward in the water, the air must move sideways, because the sail is not parallel with the centerboard. Similarly, if the air moves sideways, the boat must move forward (or back). The closer the sail is parallel to the centerboard, the more the boat must move.

Assume the sail and the centerboard are not parallel, but at a small angle with respect to each other. If the air is not motionless with respect to the water, but moves across it a certain distance, that will cause the boat to move another distance, because the sail can only slice through the air, and the centerboard can only slice through the water.

In fact, the closer the sail is parallel to the centerboard, the farther the boat will have to move, because neither sail nor centerboard can slide sideways in its medium. In the limit where the angle approaches zero, the distance the boat must travel approaches infinity. This does not depend on the direction the boat is pointed, as long as it is not directly downwind or upwind. It works on any other point of sail.

Of course, there isn't zero drag in the water or the air, and the component of the air's force parallel to travel may get quite small, so traveling perpendicular to wind may give best results, which answers your question. But keep in mind everything depends on the angle between the sail and the centerboard. The closer, the faster it can in principle go, if it weren't for drag.

In fact, the lower the drag, in water and air, the faster the boat can go. Check this video.

Classicaly, it's reaching - the fastest course of the sailboat. Usually it occurs, that on the reaching the projection of wind force onto the propagation vector is maximum values, and also boat remains stable, in terms of heeling, since the heeling projection of wind force become small. When boat is running at beam reaching the heeling force is great, the boat gain resistivity due to the heel, and drift. So, such cource could be optimum for ice yachts, or for monohulls, especially with hugh Gennakers, or Code Zero sails (like in Volvo Ocean Racing). "Modern sailboat" - today are foiling monohulls, which are propogates at the speed of 50+ knots, and the wind in their reference frames significantly differs from the earth reference frame, and the wind direction for yacht is not the same, the wind direction tends to the wind eye, according to the vector summ of the true wind and yacht velocity vector

Not the answer you're looking for? Browse other questions tagged newtonian-mechanics classical-mechanics fluid-dynamics aerodynamics or ask your own question.

3
Why trimming the mainsail gives a larger torque to head up
6
What exactly is the 'lift' of a sailboat as explained by Bernoulli principle
10
Problem understanding basic sail mechanics
2
Computing the force generated by a sail on a boat
1
Aerodynamics of wet versus dry sail
4
Why are boats turning parallel to the wind if left alone?
1
Can you sail up/down a moving river on a windless day?
0
Sail propulsion (or wing lift) by wind deflection (without Bernoulli principle)?