Sum of torque from a sphere

A sphere (grey color) turn in rotation at $\omega$ rd/s. There are 2 walls that prevent sphere to escape. Walls can only turn around center of rotation. The sphere turn only at $\omega$ rd/s too. The center of gravity of sphere is the center of circle. The center of gravity of {system less sphere} is red point. Two forces on walls give a torque. Magenta force is centrifugal force. Red forces = magenta force on walls. F1 and F2 are forces perpendicular on radial axis, there are projection, there are not friction. 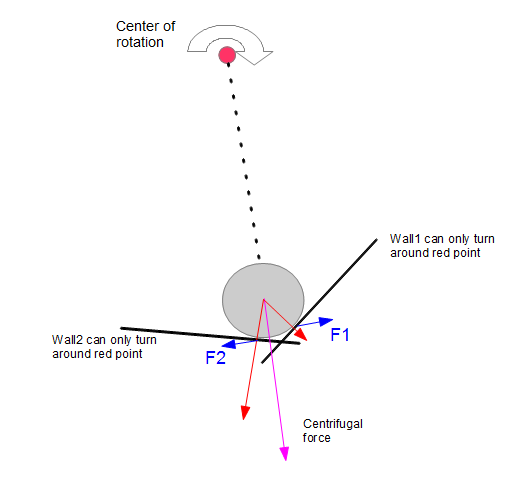 I done the resolution with the projection in each axis. There is a difference on $d$ but very little difference, sure forces F1 and F2 change in the same time. I drawed new projection: 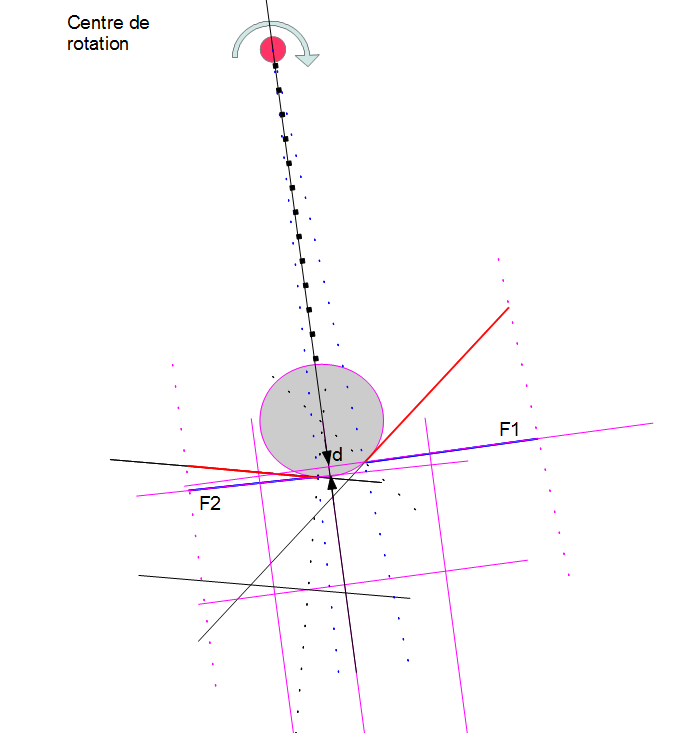 If I add friction, this change the equilibrium, this don't change $d$ nor $R$ so like friction can be different on interface sphere/wall1 and sphere/wall2, how can I have a sum of torque at zero ?

I drawn all forces with friction: 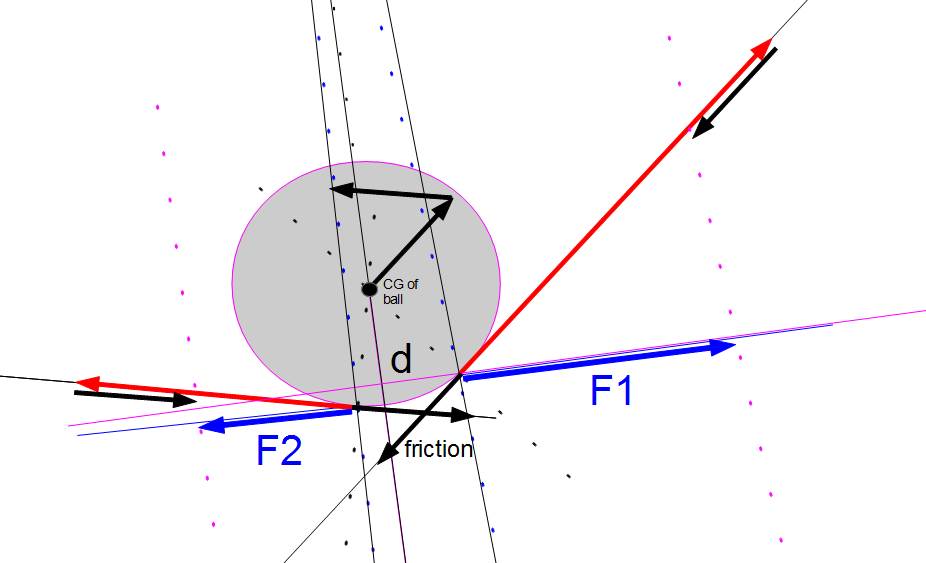 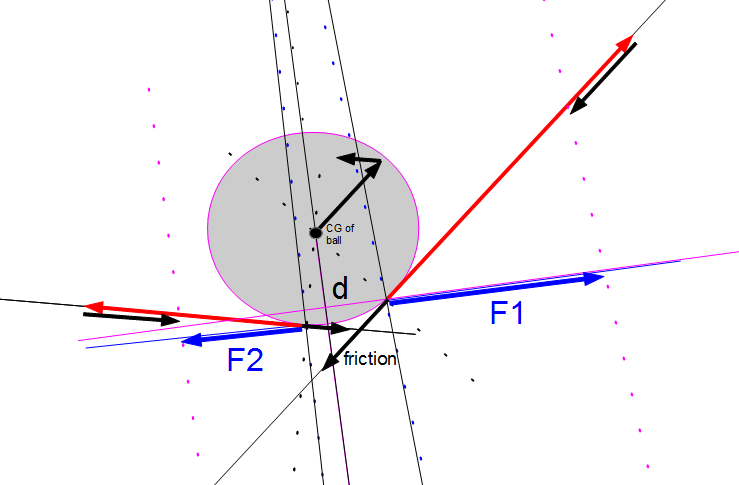 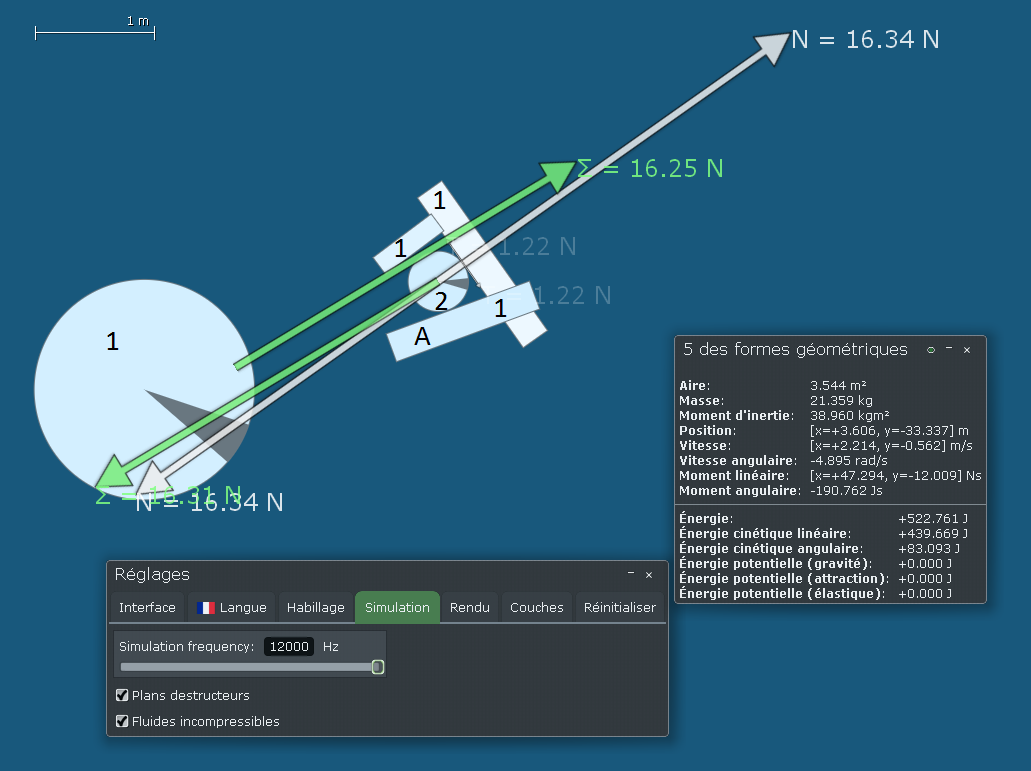 Pieces 1 are link together (it's one piece). Piece 2 is alone. The system turn clockwise. Friction is at 0.5. If I added weight to (A) this move the center of gravity of (1), and the torque increase more. The weight of pieces are:

Maybe the software is not precise enough. But when I look at forces I can understand the torque increase more and more. So what force is false ?

I have isolated 5 cases:

The most common : here the system win energy 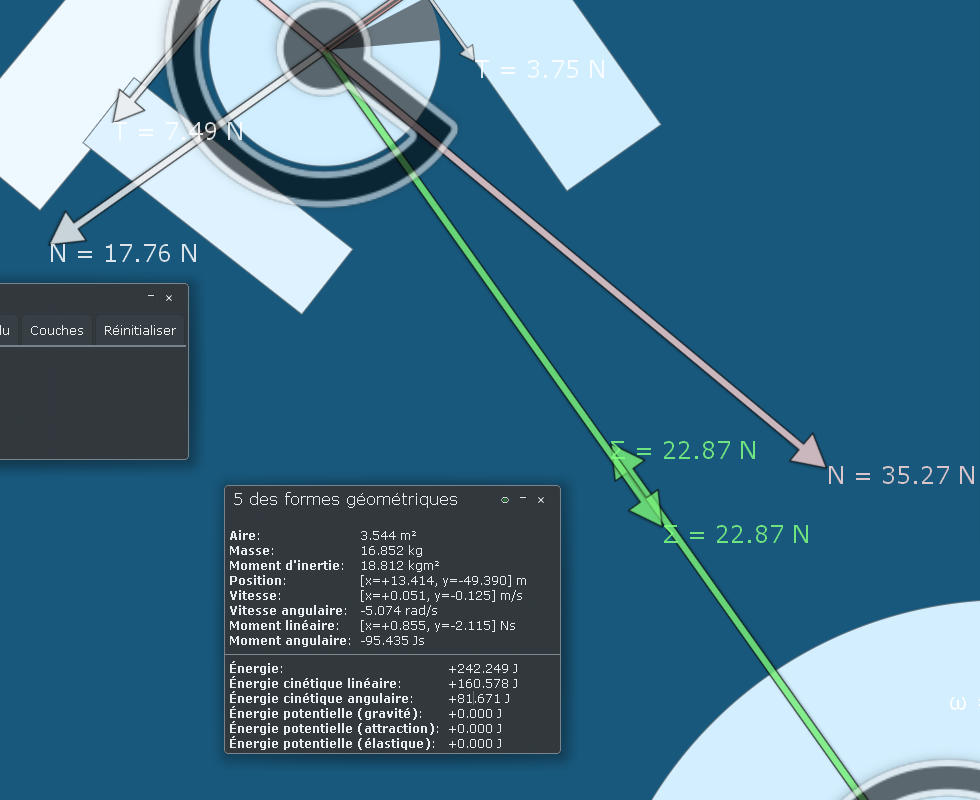 Sometimes: I can't say if system win or lost energy because it's too short 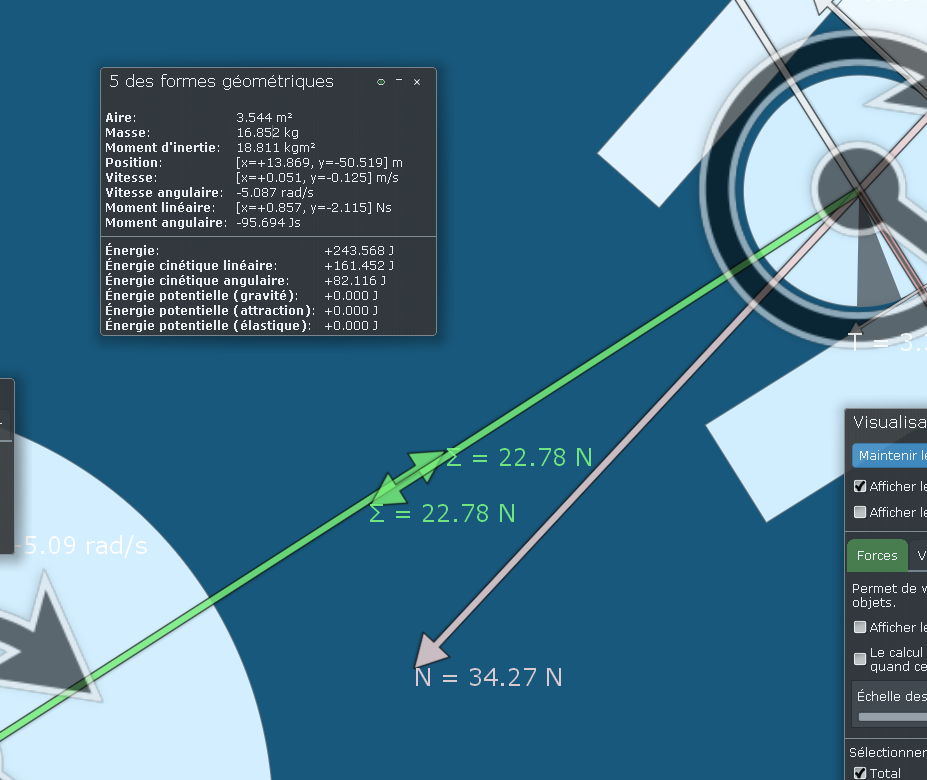 It depend, this is the most difficult to say, with x rd/s it's sometimes (less than first case), with y rd/s it's often (more than first case). The energy is lost or win, it depend. But that I find strange, it's the energy. Angular energy is lost (the torque must increase angular energy in this case) but linear velocity increase sometime more sometime less than angular velocity. 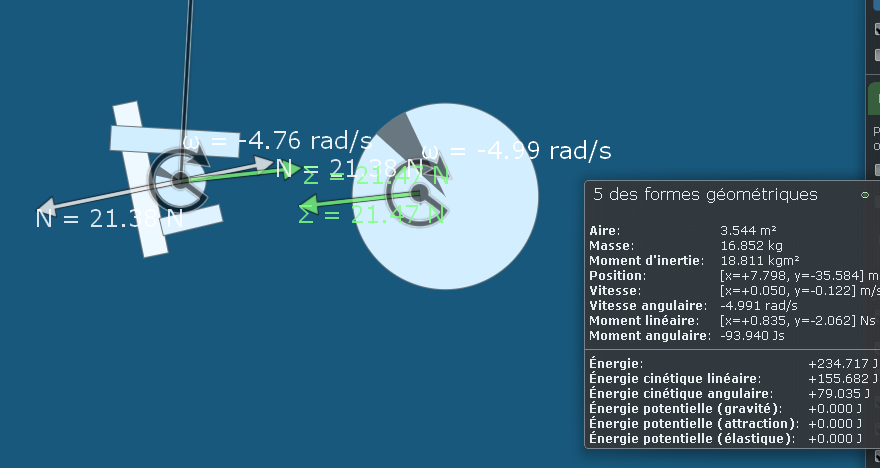 Very rarely (very less often than second case), I estimated this case like 20 cases on 12000 cases in a turn: Here the system lost energy. The energy lost is important because I can see it even the forces appears very quickly. 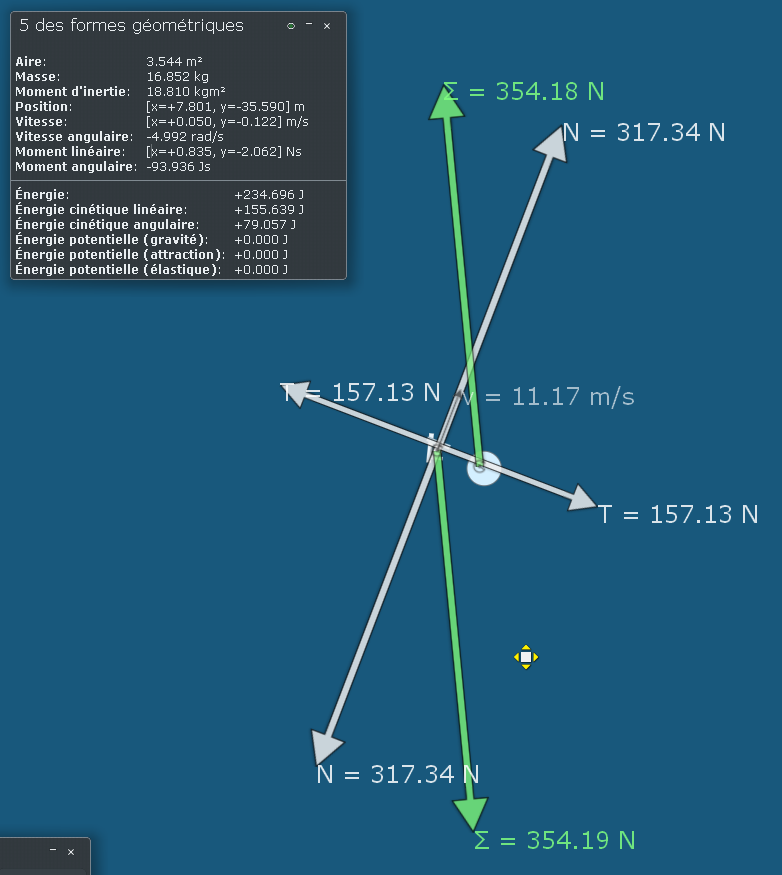 Sometimes: I can't say if the system win or lost energy. No forces N.

If you can explain each case ? I would like to understand forces and why energy move up/down. The case 4 is a bug I think, but it lost energy don't win. Maybe in the first case the software add energy but in fact the system lost.

I think I understood something but I'm not sure:

In the following case (it's the same case than before but with more straight surfaces for show if it was not the mesh of Algodoo, but not and I added an axis for show if there is the same problem with energy and it is even energy increase slowly): 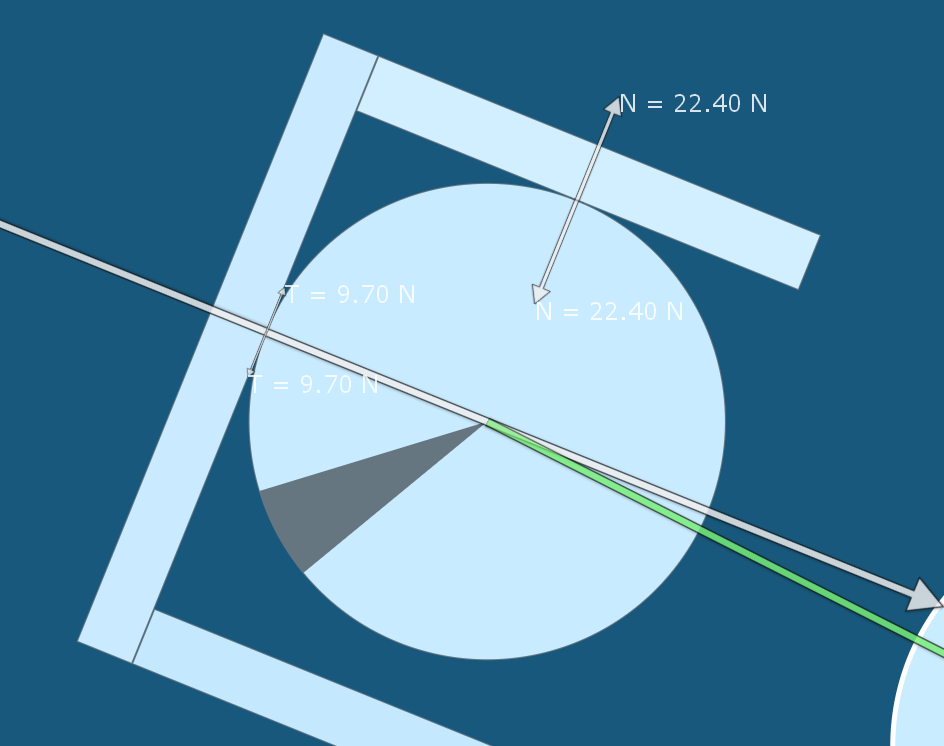 In Algodoo the free big circle turn around itself. It's logical that big circle in free rotation receive a torque on it. This torque act in its center of gravity. Forces act on another object from axis, like radius is not the same the torque is not the same and energy too I think. I resume forces like that: 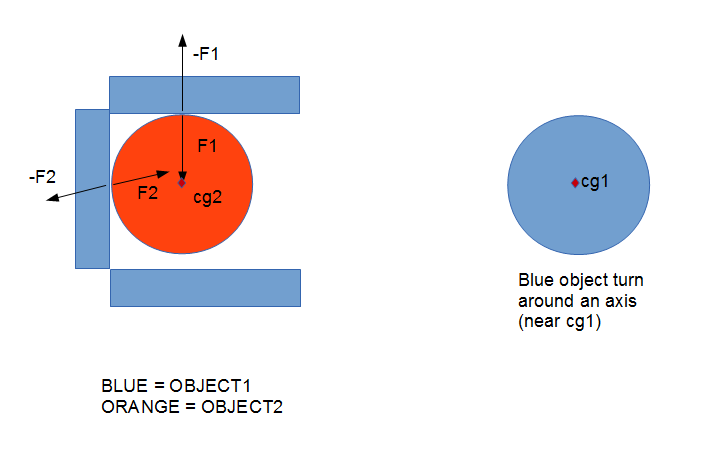 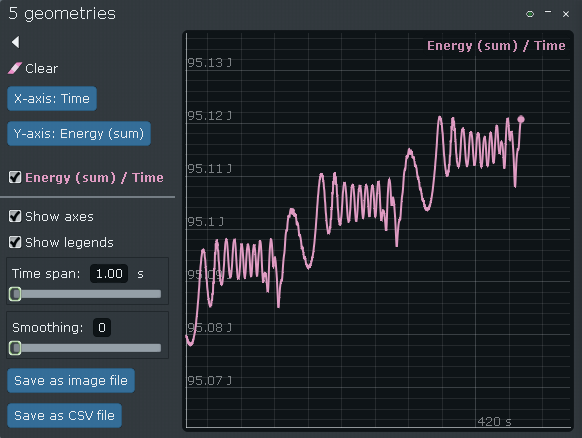 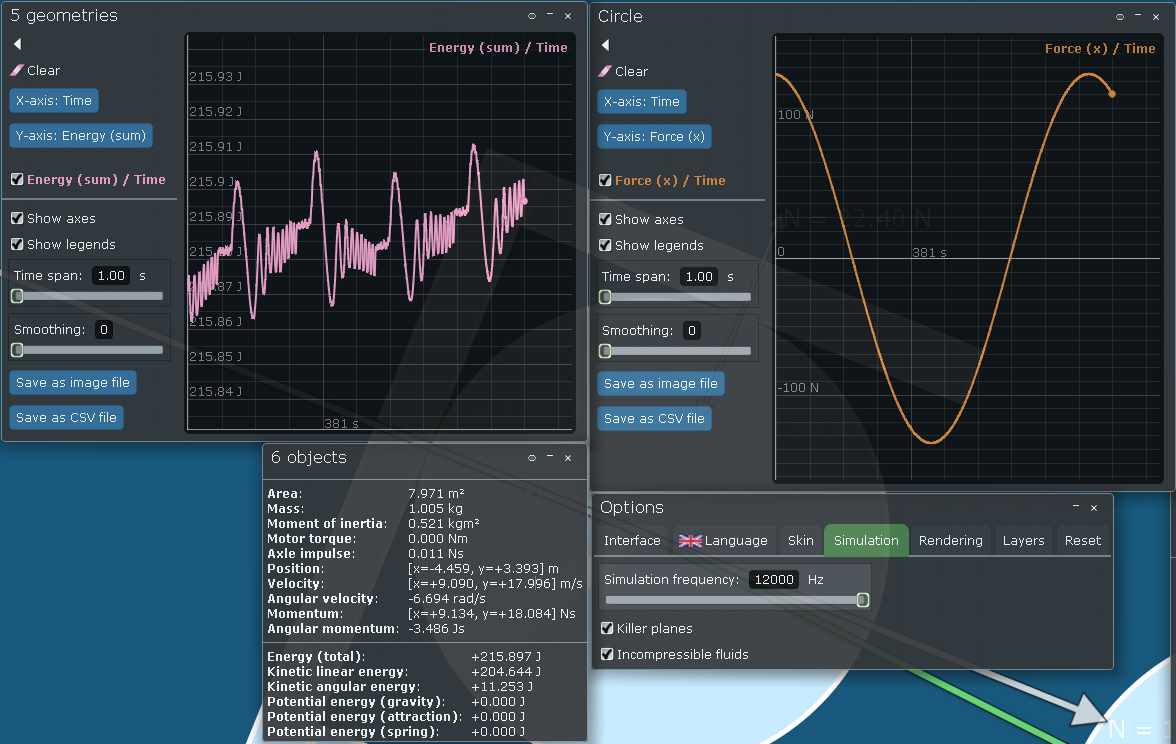 What do you think about that ? Free big circle can turn around itself with a particular forces on it, yes/no ? If yes, these forces are apply in its center of gravity, yes/no ? And these forces don't work in the same value to other object due to the difference of radius, yes/no ? 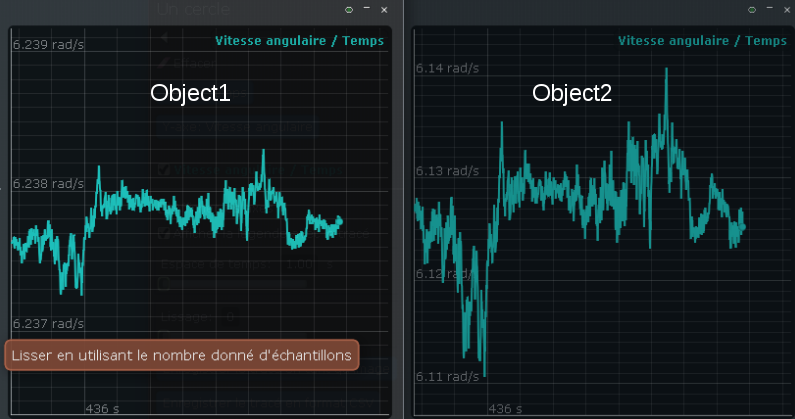 There can only be a normal force from the walls (no friction) and if their incident angles are $\psi_1$ and $\psi_2$ from the centrifugal axis, and the sphere center of mass is only accelerating in this direction by $m r \Omega^2$ then

Which is solved for

From the diagram above it can be seen the net torque on the sphere is zero since all forces pass through the center of mass.

I understood where different torques come from. Friction don't exist all the time, it's ok when Algodoo don't give torque. Torque exist only when objects force each other to follow its direction, with different directions. It's the heavy object that give the main direction. Like friction change, torques change all the time, sometimes positive sometimes negative, sometimes 0.

I think I understood where the energy come from Algodoo too. It' possible to imagine there are forces from friction not all the time. When friction forces apply a force on small ball it apply the same force on big ball but in the other direction. 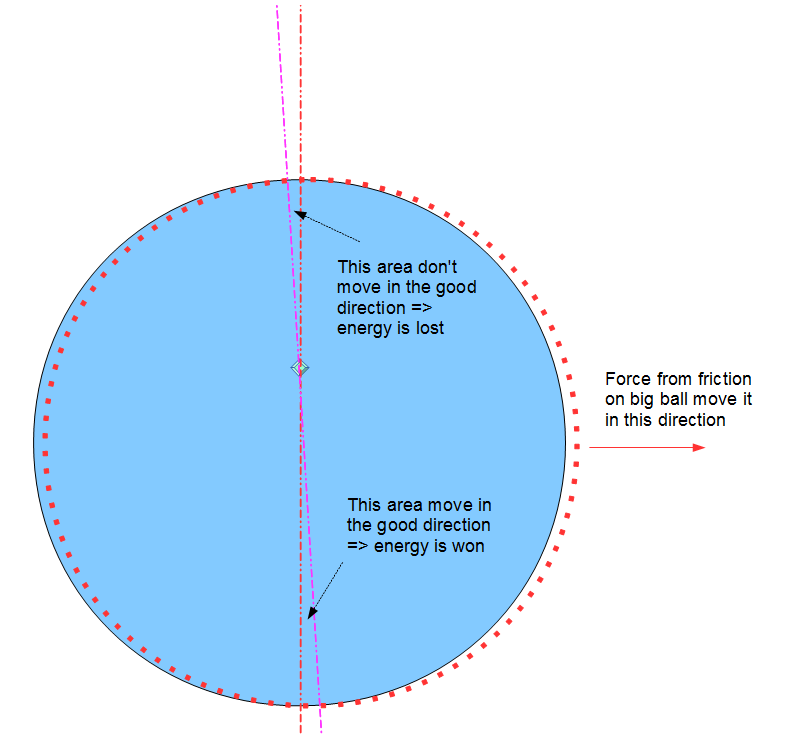 Now, big ball is free to move on a small distance, it can move like red circle (linear direction). A part of the solid move in the good direction (the direction that solid must have if it turn with the small ball) and a part in the bad direction. If friction give energy to small ball it must cancel this same energy to big ball but with 2 different areas it's possible to see it's not the case.

Sure, center of gravity of system is not at the same position than big ball but it can be very close. I don't take in account centrifugal forces and I don't think it's necessary.

I'm not sure it's possible to give equations of this system, because friction change at each time, like position etc. But with numerical program I think it's possible. I will attempt to build a program and come back. Sum of energy must be at 0, so, Algodoo don't take in account with its simulation, maybe I can see where with my program. 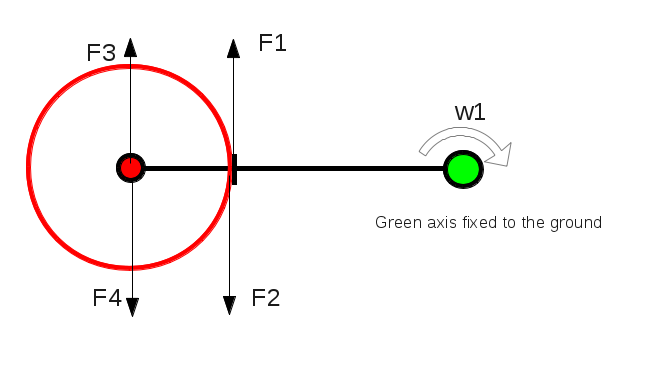 I'm interesting about the transcient analysis while $w2 < w1$. The green axis is fixed to the ground for simplify calculations.

I guess no friction elsewhere than between red disk and black arm. I guess that the force $F$ from friction is constant even rotationnal velocities are changing, just for simplify calculations.

so the difference of kinetic energy of the arm is:

so the difference of kinetic energy of the red disk is:

Algodoo don't take in account heating, but it's possible to have extra positive energy with good values of $I_1$ and $I_2$ and velocities. $I_2$ small and $I_1$ big like the simulation shows in Algodoo.

3
Direction of torque precession of a spinning wheel
4
If a pendulum is on a rotating table, will a torque be generated?
2
Rotation of object on another object under rotation
5
Sum of energy for 2 solids in rotation