Regarding the centrifugal force in a 3-body system

In our lecture about general mechanics, we have treated the simplified 3-body system consisting of the Sun, the Earth and the Moon. We assumed that the moon does not have any influence on the Sun or the Earth and wanted to find its equation of motion. Let us consider the frame of reference of the Earth as illustrated in this sketch: 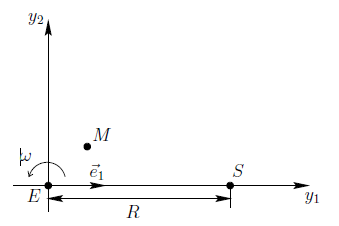 Denote by $M$ the Sun's mass and by $m$ the Earth's mass. In the lecture notes, it is stated that gravitational and centrifugal force of the Sun and the Earth have to cancel each other which leads to

This is the reduced mass. This effectively accounts for the fact that the center of the sun is not 'fixed', but rotates around the center of mass (also called the barycenter) of the Earth and the sun together.