I've seen many science popularisation documentaries and read few books (obviously not being scientist myself). I am able to process and understand basic ideas behind most of these. However for general relativity there is this one illustration, which is being used over and over (image from Wikipedia):

I always thought that general relativity gives another way how you can describe gravity. However for this illustration to work, there needs to be another force, pulling the object down (referring to a direction in the attached image). If I put two non-moving objects in the image, what force will pull them together?

So where is my understanding incorrect? Or is general relativity not about explaining gravity and just describes how heavy objects bends spacetime (in that case the analogy is being used not correctly in my opinion)?

UPDATE Thank you for the answers and comments. Namely the XKCD comics is a spot on. I understand that the analogy with bent sheet of fabric pretty bad, but it seems that it can be fixed if you don't bent the fabric, but just distort the drawn grid.

Would you be so kind and answer the second part of the question as well - whether general relativity is explaining gravitational force. To me it seems that it is not (bending of spacetime simply can not affect two non-moving objects). However most of the time it is being presented that it does.

You're quite correct that the metaphor is misleading, and indeed you'll find professional relativists tend to be rather scornful of it. There are a number of problems with it, of which the problem you mention is just one. For example the diagram implies only space is bent, while the bending is of spacetime so time is bent as well. The diagram also implies there is a third dimension out of the plane in which the bending occurs. Applied to our 4D spacetime this would mean there would have to be a fifth dimension for spacetime to bend in, but this isn't the case and the type of bending that occurs is called intrinsic curvature and needs no extra dimensions.

The problem is that GR is really, really unintuitive. If you want to know more than the hints suggested by the rubber sheet metaphor the only course is to roll up your sleeves and start learning the maths.

It would be nice if there were some intermediate course between the misleading but simple rubber sheet metaphor and the maths, but I don't know of anything. I think the problem is that you won't get anywhere without first understanding coordinate invariance and this is a really tough idea to understand. If you really want to learn more I'd start with special relativity as this contains the seeds of the ideas you'll need.

In your edit you say bending of spacetime simply can not affect two non-moving objects. I'm guessing that you're thinking about objects rolling around on a curved surface as shown in the common metaphors for GR. The question is then why objects that aren't rolling around should experience a force.

The reason for this is that an apparantly stationary object is moving because it's moving in time. For the usual 3-D velocities we see around us we describe velocity as a 3-vector $\vec{v} = (v_x, v_y, v_z)$. But remember that spacetime is four dimensional, and the velocity for objects in relativity is a 4-vector called the 4-velocity that includes change in the time coordinate. The reason a stationary object experiences a force is that the time coordinate is curved just like the space coordinates. This brings me back to one of my criticisms of the rubber sheet analogy i.e. that it cannot show that the time coordinate is curved just like the spatial coordinates.

At the risk of getting repetitive, it's hard to explain why curvature in time causes the force without getting into the maths. The simplest explanation I've seen is in twistor59's answer to What is the weight equation through general relativity?. This shows, with the bare minimum of algebra, why a stationary object in a gravitational field experiences a force.

I happened upon this excellent source while browsing a related Physics SE question.

The analogy presented therein is somewhat similar to the rubber sheet one, but does away with the weight in the center.

Imagine a 2D spherical shell embedded in 3D space. Two people are located side by side on the equator of this sphere. They both begin walking parallel to each other, "northward" toward the one of the poles. It will appear initially that they are walking parallel, but eventually they meet up at the north pole. That is, their paths cross. The two people might interpret their closeness as a result of some "force," when in fact the geometry of the space in which they live caused them to move closer to each other.

There is no problem with the analogy when stated correctly, and I haven't seen a single general relativity textbook that pretends the curvature is similar to a physical sheet getting bent due to a weight, or that stuff moving in geodesics is akin to stuff rolling down such a physical sheet. Perhaps there are popular science books that say this, I don't remember.

The reason the analogy is good is because curvature is the distortion of distances, so something can be bigger on the inside. The best way to show this in a 2d sheet short of drawing squiggly axes is to bend it externally, and the exact same mathematics -- stuff like area being greater than $\frac1{4\pi}$ the square of the circumference, or the angles in a triangle not equalling 180 applies to it. The analogy is then a visualisation of the geodesic equation, which is that stuff follows the path of the greatest spacetime interval (space-like convention).

Are you familiar with the trouble with Map Projections? Every map of the Earth will necessarily distort its features. The surface of the earth is Intrinsically Curved. Among other things, in the specific case of the Earth, this means there are no parallel lines.

On a globe, the shortest distance between two points on it is not a straight line through the earth, such lines aren't allowed, one must stay on the surface. Intersect a plane with the globe that passes through the center and the two points in question. The portion of the circle intersected on the surface gives you the shortest path. These are the "lines" or more generally, Geodesics, as they apply to the surface of a sphere.

Just as the globe is curved in this way, mass distorts the space around it, creating intrinsic curvature. Just as lines of longitude intersect at the poles, geodesics in curved space-time do not remain the same distance apart. These geodesics are the trajectories of objects in free fall. So just as ants following arbitrary lines of longitude will eventually intersect at the poles, free falling objects will approach a massive object.

This is what it means that gravity is a geometric property of 4d space-time, geodesics are distorted from flat space in such a way that they get closer together. Geodesics are inertial paths, so objects fall to the center.

Space is invisible and 4D is hard to picture, but even when mathematically precise, this coming together of geodesics is the feature in play.

I agree it is a terrible analogy, but one that requires little imagination on the part of the viewer.

A better representation can be found on the cover of 'Gravitation' by Misner, Thorne and Wheeler. It is one of the best I've seen and clearly shows the curvature leads to 'gravity'. (I believe the commentary means the image is covered by fair use but ... the same image can be seen by looking the book up at Amazon) 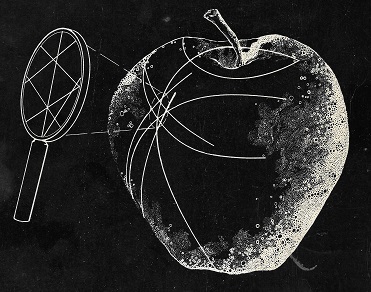 It not too hard to visualise local (3+1) dimensional curved spacetime - imagine 2 banks of canon at right angles firing a salvo off a cliff edge. The canonball paths are geodesics. It clearly shows that it is spacetime that is curved, not (so much) space. Unfortunately I don't have an image to hand.

Not the answer you're looking for? Browse other questions tagged general-relativity gravity spacetime curvature popular-science or ask your own question.

5
Is the popular explanation given for gravity in General Relativity misleading?
3
Does the shape of the Universe refer to the curvature of spacetime in 5-dimensional space?
2
How to visualize spacetime curvature?
0
Gravity bends space, so how can space have only 3 dimensions?
0
How can space time be bent?
1
What is the Fabric of Spacetime?
1
Mental model of general relativity
0
Is there Sun constantly falling (and us along with it)?
0
Gravity creating other dimensions
0
Does the fabric of spacetime go through objects?
See more linked questions

8
How could we know that the relativistic curvature of universe is intrinsic?
1
Is the concept of (Newtonian) forces part of General Relativity?
6
According to general relativity planets and Sun bend the spacetime (explaining gravity), but does this hold true for smaller objects?
5
How space regains its neutral shape in the absence of massive objects?
0
Can anyone explain how does an object move upward from the surface of the earth defying the spacetime curvature?