Usually spacetime distortion due to mass in GR is visualized as a rubber sheet distorted under some massive object, like this: 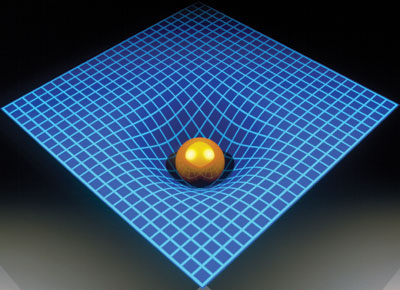 or as shown in this link.

But what has always bothered me is that this description doesn't take into account time. As I understand, it's the whole spacetime which is bent, not just space. So I'd like instead to see a visualization of spacetime bending with time taken into account. Something like this: 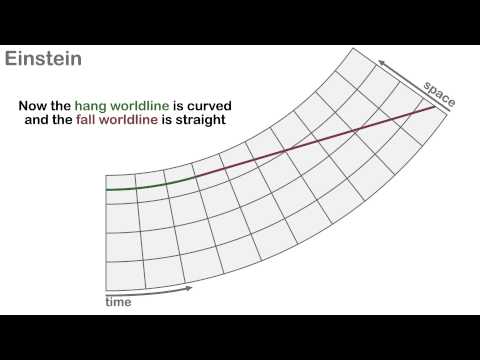 Here however the gravity field is homogeneous, and I'd like to see it more in the scale similar to previous image of bent space, so that it'd be visible how distortion is becoming smaller with distance from the object.

Is there any such visualization?

According to Gauss' law, the gravitational field $g$ is proportional to $r^{d-1}$, where $r$ is the distance to the single gravitating object and $d$ is the number of spacial dimensions. Unfortunately, when $d = 1$, there exists no falloff of the field when moving further away from object. However, inside the object, where density is not null, there is gravitational field gradient.

Now, suppose there is a finite universe with only one spacial dimension, whose ends are connected to form a circle. If we add also a time dimension, we get a cylindrical surface (time is in the vertical direction again), as on the next picture in the middle. If we also fill the space with some constant mass-density, the geometry of the space-time deforms (negative density corresponds to left image, positive to the right).

Suppose a particle starts on a point on the equator of the sphere, with a neighbouring particle near it. Their spacetime trajectories could be two neighbouring longitudal lines on the right picture. As we move up (time goes on), the distance between those two starts to contract, resulting in a fictious attractive force, even though they are both non-interacting. If we had chosen the negative density spacetime on the left image, the result would have been a repulsive force.

$Edit:$ All such illustrations are imprecise and have also some qualitative misleading features. For example, it seems possible for an accelerating particle to turn it's travel direction by $180^\circ$ (going back in time). However this is due to the fact that in this illustration we use locally Euclidean geometry, while in relativity we should use locally Minkowskian geometry. This unrealistic feature is present in (almost) every such visualization.

Another misleading feature of the example above is the smooth pole of the sphere. Actually, the conservation of mass-energy implies that as we move towards the poles, the density increases and so does the curvature. Thus the poles should be sharp tips, rather than being smooth. The lower pole would then stand for the Big Bang and the upper for the Big Crunch. Due to this, particles would not start travelling backwards in time, but rather end up in (and emerge from) a singularity. Again, it is impossible to remove this feature in Euclidean space, as this would imply at some moment the curvature and thus also density be smaller than in the equator (this is true even if the tip would be "directed" inside the sphere, as this would imply even negative Gaussian curvature at some point).

One example I know is here:

They are considering the "maximally extended" Schwarzschild black hole, which has a white hole interior region along with the black hole interior region, and two distinct "exterior" regions which can never communicated. If you're not familiar with this, one of the most natural coordinate systems for dealing with this solution is the Kruskal-Szekeres system, take a look at the "Qualitative features of the Kruskal–Szekeres diagram" section of the wiki article for a basic introduction.

To create a spacetime embedding diagram, Marolf holds the angular coordinates constant and looks at a 1+1 surface (one space dimension, one time dimension) where the Kruskal-Szekeres coordinates that vary are the ones labeled X and T in the wikipedia article, the first of which is always spacelike and the second of which is always timelike. Then he finds a corresponding 1+1 surface in a larger 2+1 Minkowski spacetime such that the surface also has one spacelike dimension and a timelike dimension, and which has the property that for any curve confined to the surface, its proper time or proper distance as calculated using the Minkowski metric is the same as the proper time or proper distance of the corresponding curve on the Kruskal-Szekeres surface (as calculated using the metric for the Schwarzschild black hole, expressed in Kruskal-Szekeres coordinates). The paper has a number of diagrams, here are a few that give you a basic idea of what this spacetime embedding diagram ends up looking like, with the second one showing which sections of the surface correspond to the the four "regions" of the Kruskal diagram I, II, III and IV (I and III are the exterior regions, II and IV are the black and white hole interior regions): 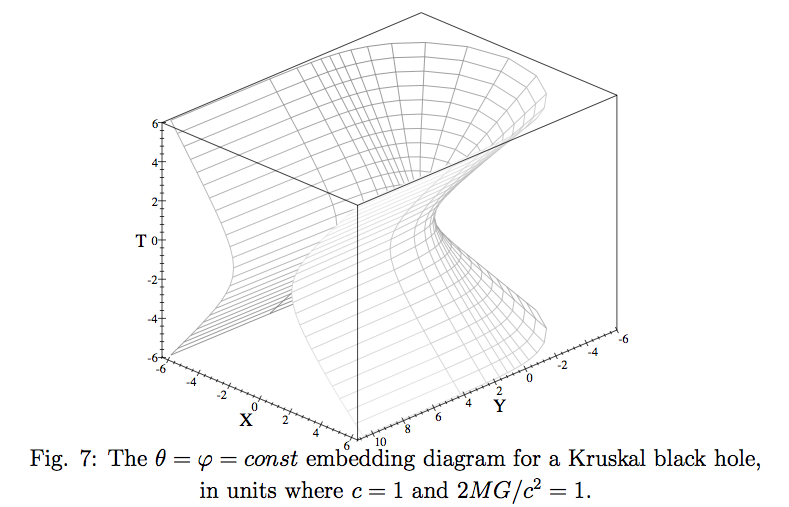 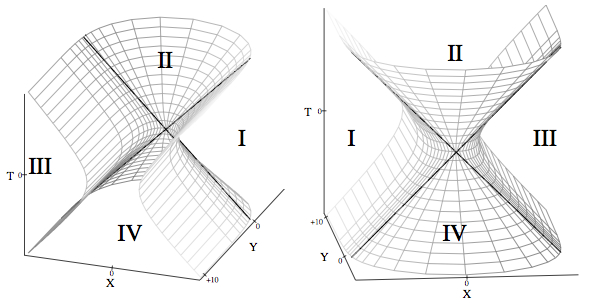 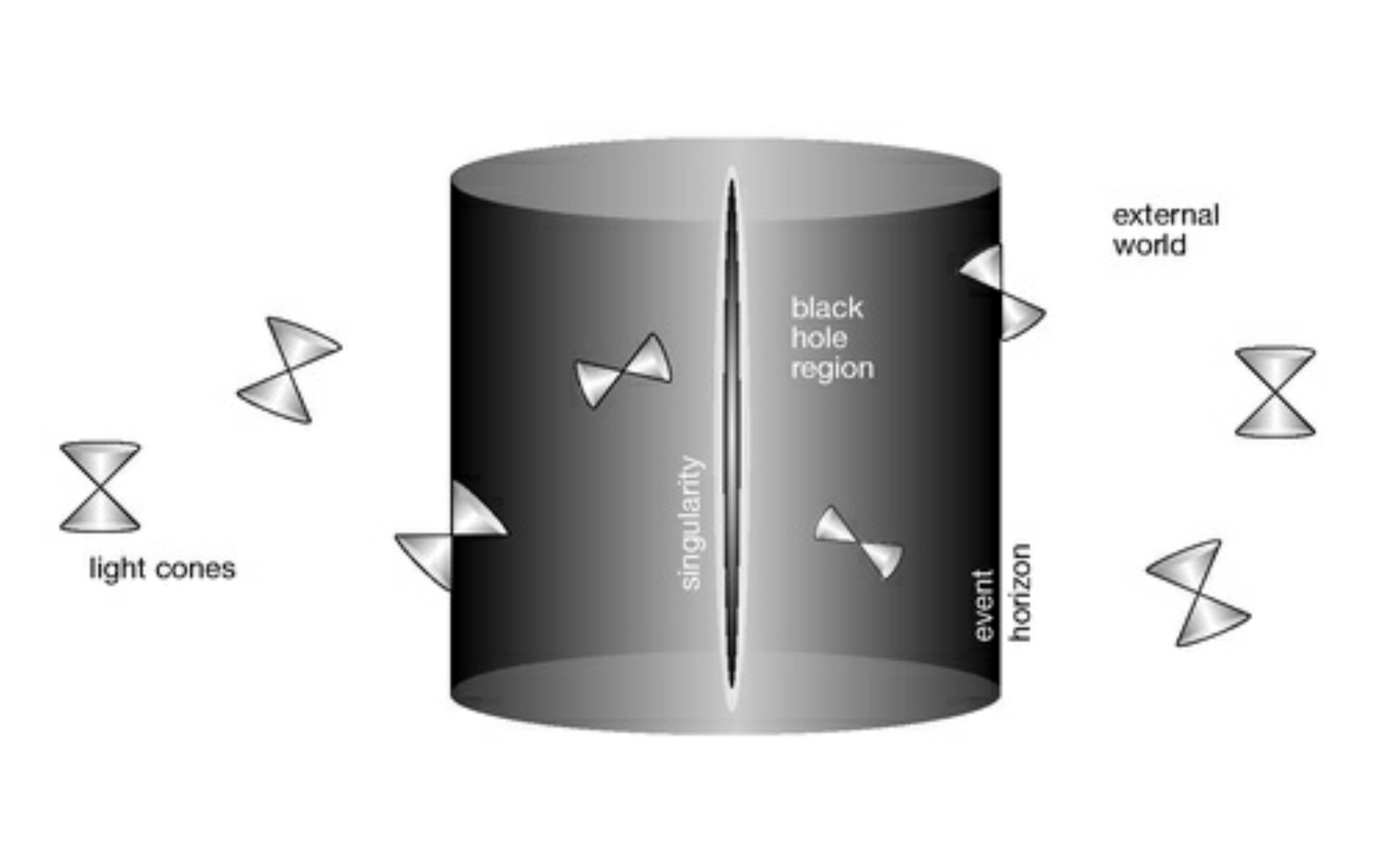 In book "from eternity to here" by sean carroll he described distortion of spacetime near a black hole. also you can change the visualization to realize milder distortions. Before you go forward you should know about light cones in GR. it is explained in book but I assume you know it. He says:

[But a real black hole, ..... It is a true region of no return—once you enter, there is no possibility of leaving, no matter what echnological marvels you have at your disposal. That’s because general relativity, unlike Newtonian gravity or special relativity, allows spacetime to curve. At every event in spacetime we find light cones that divide space into the past, future, and places we can’t reach. But unlike in special relativity, the light cones are not fixed in a rigid alignment; they can tilt and stretch as spacetime curves under the influence of matter and energy. In the vicinity of a massive object, light cones tilt toward the object, in accordance with the tendency of things to be pulled in by the gravitational field. A black hole is a region of spacetime where the light cones have tilted so much that you would have to move faster than the speed of light to escape. Despite the similarity of language, that’s an enormously stronger statement than “the escape velocity is larger than the speed of light.” The boundary defining the black hole, separating places where you still have a chance to escape from places where you are doomed to plunge ever inward, is the event horizon.

It would be wrong to think of the singularity as residing at the “center” of the black hole. If we look carefully at the representation of spacetime near a black hole shown in Figure 19, we see that the future light cones inside the event horizon keep tipping toward the singularity. But that light cone defines what the observer at that event would call “the future.” Like the Big Bang singularity in the past, the black hole singularity in the future is a moment of time, not a place in space. Once you are inside the event horizon, you have absolutely no choice but to continue on to the grim destiny of the singularity, because it lies ahead of you in time, not in some direction in space. ]

So if I understand it well (and I should tell I am not a physicist) I can say the rubber sheet visualization is good for describing the space distortion near a massive object (look at the light cone near singularity). Objects don't absorb the space instead they push space like rubber sheet but they absorb the time dimension (look at singularity and time dimensions in light cone bending toward singularity). I hope you understand my explains. 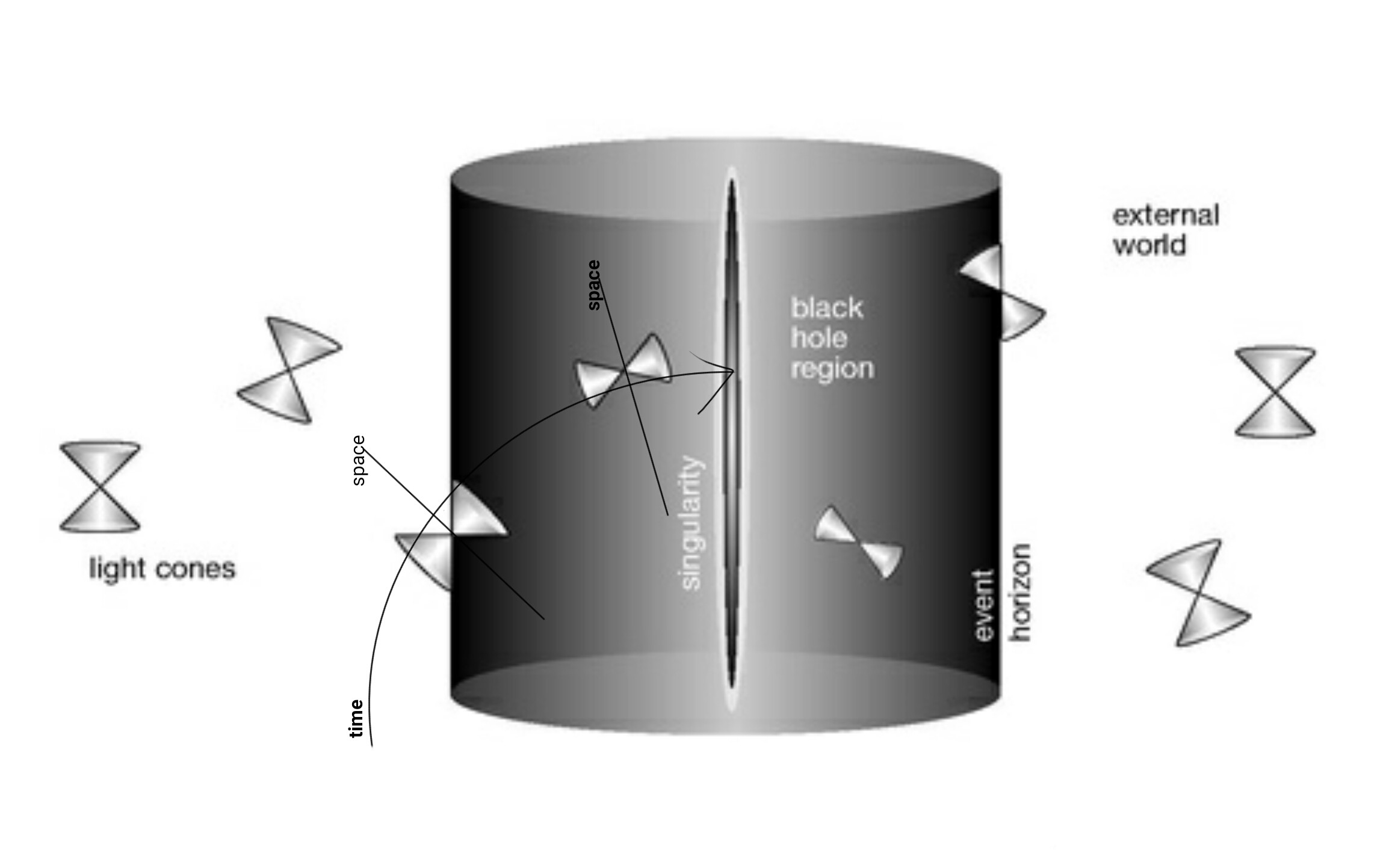 0
How would you visualise a curvature in spacetime?
9
What does spacetime look like near a black hole?
3
Conceptual problem with general relativity
9
Visualizing gravity in 3D
4
Physical visualisation of curvature
3
General relativity in 2D curved paraboloid space time

28
Does curved spacetime change the volume of the space?
2
Does spacetime have friction?
3
If all matter were removed from space-time, what would be remaining?
1
Is it accurate to say space moves because spacetime is curved?
44
Why does the speed of an object affect its path if gravity is warped spacetime?
7
Visualizing wormholes without embedding spacetime
0
Would I be able to tell if I was inside a piece of distorted space? Are objects distinct from spacetime?