Why heating a white dwarf shrinks its degenerate core?

I tended to think that under electron degeneracy, electrons are spread over more energy states instead of being spread over so much space, so the exclusion principle lets more electrons to be effectively collocated. So making a white dwarf hotter would perhaps make the white dwarf (of unchanged mass) shrink by electrons going into even more different energy states, most of them fully packed.

Now I encountered a rather different explanation: cold electrons are big due to the uncertainty principle.

(Anders Sandberg's answer has pointed out that white dwarfs don't actually shrink! While the degenerate core, or at least it central part, increases in density, the outer non-degenerate regions expand and the star expands as a whole which is directly observable. However, the question about what is happening in the middle of the star remains.)

If translated to actual physics, are the two explanations/mechanisms somehow the same one? And if not, which one contributes quantitatively more of the effect that a hotter white dwarf of the same mass is denser in the middle, in the equilibrium state?

(My own background: I am not a physicist. I understand what makes atoms occupy a volume but I don't understand how the "size" of a mere electron is even defined when trying to "fully pack" an energy level or a single quantum state of electrons within some space. I'm also well aware that white dwarfs are far from composed of only electrons but I am not sure whether all that hadronic matter plays any role in how tightly I can pack the electrons themselves.)

But white dwarfs are not expected to shrink! Here is the first plot I could find, from (Soares 2017), showing that for a given mass the radius increases as you heat it: 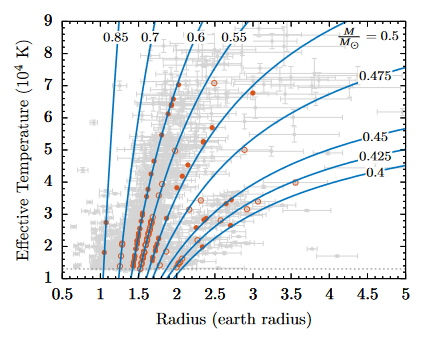 The paper derives a semi-empirical formula originally from Shapiro & Teukolsky that links mass, radius and temperature. This is basically a hydrostatic equilibrium formula, only weakly affected by the equation of state. See (Koester & Chanmugam 1990, sec 3.6) for more details when dealing with the EoS.

I think that what happens here is just that the electron gas surrounding the lattice expands, since for most white dwarfs it is far from fully degenerate.

If you supply heat to a fixed mass white dwarf, then less of it is degenerate.

The interior of the white dwarf is approximately isothermal because of the very high thermal conductivity of an electron-degenerate gas and is about 100 times the temperature of its photosphere. As you move outwards, the density and hence electron Fermi energy decrease. At some point you can no longer say that $E_F \gg k_B T$ and the gas becomes partially degenerate and then non-degenerate near the photosphere.

If you raise the temperature of the white dwarf interior, it has little structural effect near the core, where $E_F \sim 1000 k_BT$, the deep interior remains effectively very "cold" and the electron gas is very, very degenerate. However, it does move the radius where degeneracy is lost inwards. Thus I suppose you could say the degenerate "core" (although it is the vast majority of the star) shrinks.

The white dwarf as a whole expands, because the pressure is increased very significantly in the outer layers.

Not the answer you're looking for? Browse other questions tagged quantum-mechanics thermodynamics electrons astrophysics white-dwarfs or ask your own question.

15
Can Heisenberg's uncertainty principle be used to prove the electron can't exist in the nucleus in this way?
8
Why is the white-dwarf mass distribution highly peaked?