Why do white dwarfs shine white?

The hotter something is glowing the more white/blue it appears. A dying medium sized star expands, cools and becomes a red giant for a while, but eventually it is going to gravitationally collapse (once enough Iron (Fe) is accumulated in the core). Then it blows the outer layers away and what is left collapses into a white dwarf.

What makes the dwarf shine? and why is it white?

Does the luminosity decreases as the object cools down, or is there some other reaction that keeps it glowing for a long time?

Can a white dwarf turn brown or black never to be seen again?

Do all white dwarfs turn into Neutron stars eventually?

To amplify a bit bit on Jerry's answer. Because of its small surface area, and large thermal mass (typically about a half the mass of the sun) the cooling time of white dwarfs is billions of years. As he says they do cool, however the universe isn't old enough to have created condensed red dwarfs. The stars currently called red dwarfs, are main sequence (hydrogen burning) low mass stars with lifetimes on the order of a trillion years.

I guess, we've all simply forgotten to answer his other question "do all white dwarfs become neutron stars/". The answer is no. The white dwarf's pressure is maintained by electron degeneracy pressure, they do not contract appreciably as they cool down, and dense as they are they are orders of magnitude less dense than nuclear matter. A white dwarf has to exceed the Chandrasekhar mass for core collapse in order to become a neutron star. And if enough mass is added to a white dwarf to exceed that limit, you get a thermonuclear runaway reaction leading to a type 1a supernova instead.

White dwarf stars used to be the interior of a star, which was the hottest part of the star. They shine white because they are still very hot from this past part of their history. As they age, they will cool, and as they cool, they will lose temperature, and their blackbody profile will shift to redder and redder colors, and eventually into the infared and radio ranges where they won't seem to shine at all to the naked eye.

And yes, a white dwarf state is a stable final state of a star, so long as it does not interact further with any matter. If that happens, it is possible to have a White Dwarf supernova

The first paragraph is incorrect. We do not expect white dwarf progenitors to have iron cores. The majority will have cores of degenerate carbon and oxygen.

White dwarfs are "born" with interior temperatures of a few $10^{7}$ K (and if hotter, then neutrino losses ensure they cool to this temperature on timescales of a million years). Their interiors are approximately isothermal (degenerate electrons have a long mean free path) and contain thermal energy in the non-degenerate carbon and oxygen nuclei (the degenerate electrons have essentially zero heat capacity). If the nuclei behaved as an ideal gas (with heat capacity $3k/2$ per ion, we can see that a $\sim 1 M_{\odot}$ white dwarf contains of order $10^{41}$ J of thermal energy. It is this that makes them "shine".

To get out of the interior, this energy must be transferred across a thin, non-degenerate layer at their surfaces. This acts like an insulating blanket and restricts the energy flow, that is mainly due to radiative diffusion. Calculations and models suggest that the effective surface temperature of a white dwarf is a factor of $\sim 100$ less than the interior as a result.

The cooling rate of a white dwarf slows down drastically with age, because it turns out that the luminosity is proportional to the interior temperature to the power of 3.5. This means it takes billions of years to cool to temperatures where the white dwarf surface might appear yellow or orange. In addition, the interior of a white dwarf crystallises as it cools, and this (i) increases the heat capacity to $3k$ per ion (ii) releases latent heat of crystallisation; both of which significantly delay white dwarf cooling further.

The coolest (and hence oldest) isolated white dwarfs in our Galaxy have luminosities of $10^{-5} L_{\odot}$ and radii of about 5000 km. A quick calculation suggests surface temperatures of 3800 K - which might appear vaguely reddish to the eye.

In fact there maybe some cooler, massive white dwarfs in the Galaxy. Theoretically, there may be isolated white dwarfs formed up to about $1.1M_{\odot}$ and white dwarfs in binary systems may accrete mass and grow to about $1.38 M_{\odot}$ (before exploding as type Ia supernovae or collapsing - see below). These can cool more quickly - their high interior densities mean that the temperature can fall below the Debye temperature of their extremely dense ($\geq 10^{12}$ kg/m$^3$) crystalline interiors. Their heat capacity then falls rapidly with temperature and they can quickly fade out of sight. An example that may only have a surface temperature of 3000K has recently been found in a binary system with a pulsar.

Some representative cooling curves are shown below (from Althaus et al. 2010) that illustrate these arguments. It seems quite likely that there could be white dwarfs out there that are essentially invisible in the visible spectrum, but these would likely have to be very massive ($1.2<M/M_{\odot}<1.38$) companions to other stars. 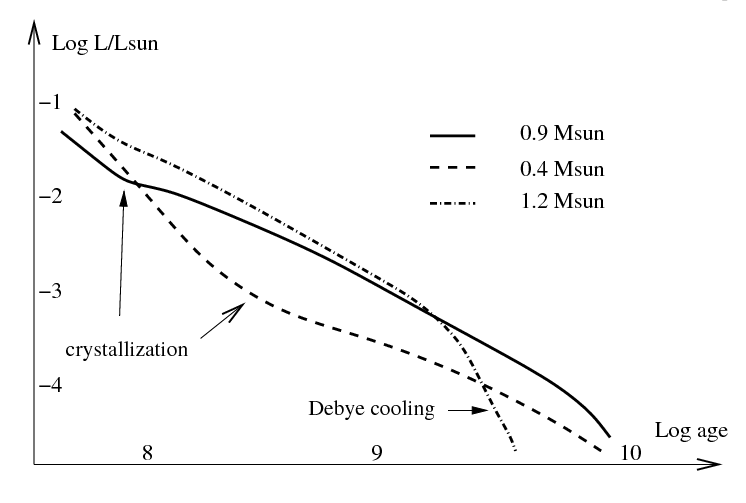 It is highly unlikely that most white dwarfs will turn into neutron stars. They will just cool at almost constant radius, since the electron degeneracy pressure that supports them is independent of temperature. However, if they were to accrete matter, such that they eventually exceed their Chandrasekhar masses, they will become unstable (actually this takes place before the "classic Chandrasekhar mass" because of GR and inverse beta decay) and they could collapse. The outcome could be a type Ia supernova that blows the white dwarf apart, but it might be possible in some circumstances to have an accretion induced collapse to a neutron star.

Last week I wrote an answer to:

I illustrate how a collapsing body will increase its entropy. This also corresponds to an increased temperature. The imploded white dwarf has its internal energy compressed into a very small volume. Hence they initially shine at a very high temperature.

The interior of a white dwarf has Fermi-Dirac statistics, but the gas on the outer layers is probably more ordinary. Further, that is what we detect. Consider a stellar core imploding from about $1.0R_{sol}$, probably more like less than this, which we will write at $5\times 10^{5}$, to about $5\times 10^3$. A rough estimate would be the natural gas law, in fact in the form Boyle wrote it in $$ T~=~\frac{V}{V_0}T_0~\simeq~10^6\times T_0 $$ The initial temperature of the core is about $10^7$K, which gives a pretty outstanding temperature of about $10^{13}$K

This is not realistic, for as the white dwarf forms it radiates most of its energy to eject off the outer layers into a nebular cloud. So the outer layer of the core collapses inwards more at a temperature comparable to a stellar surface. So that knocks this estimate down three or four orders of magnitude. In fact a newly minted white dwarf as a temperature of about $10^7$ K So direct simple calculations are not very accurate.

Not the answer you're looking for? Browse other questions tagged neutron-stars stellar-evolution white-dwarfs or ask your own question.

22
How does the Pauli exclusion principle create a force in degenerate matter?
9
Please clarify how entropy increases when matter gravitationally coalesces

3
What prevents a star from collapsing after stellar death?
32
What is the theoretical lower mass limit for a gravitationally stable neutron star?
10
Does matter found at densities of white dwarfs "feel" more like a solid, liquid or gas?
1
Why are more massive white dwarfs smaller?
0
Electron degeneracy in white dwarfs
1
Understanding the Chandrasekhar limit for white dwarfs and its relation with supernovas
2
Neutron star forms after merging of white dwarfs?
20
Why are there no known white dwarfs between 1.35 to 1.44 solar masses?
3
Why heating a white dwarf shrinks its degenerate core?