What is the period of a physical pendulum without using small-angle approximation?

What is the expression for the period of a physical pendulum without the $\sin\theta\approx\theta$ approximation? i.e. a pendulum described by this equation: $$ mgd\sin(\theta)=-I\ddot\theta $$

Motivation for my question:

I'm asking this because I had an assignment in which I had to measure the period of oscillation of a physical pendulum and we always had to release it precisely from the same angle. So I'm wondering whether that precaution is irrelevant because it feels to me that the measurement error and error created by ignoring air drag is more significant than those that would emerge by not caring about being precise about the initial angle, as long as it is smaller than circa 30°. Am I right or wrong?

Sometimes, a good figure is worth more than a thousand equations :)

I numerically integrated the following equation of motion for a physical pendulum:

with $\mathrm{sgn()}$ the signum function. The second term in this equation is the torque exerted by gravity, the third term is due to air drag (which is assumed here to only act on the bob), the fourth term is due to friction at the attachment point, and the fifth term is a linear drag effect caused by simple bending of the string (therefore, I'm assuming the pendulum was constructed with a string).

I determined the progression of the pendulum's period simply by differencing the zero passes, times 2. I used the following values in the computations (which I think are pretty reasonable):

I normalized the periods thus determined, by dividing them by the period that follows from linearized theory for a compound pendulum (see the wiki, $T=2\pi\sqrt{I/mgL}$), and plotted the results for three cases:

for each case, I used three initial starting angles: 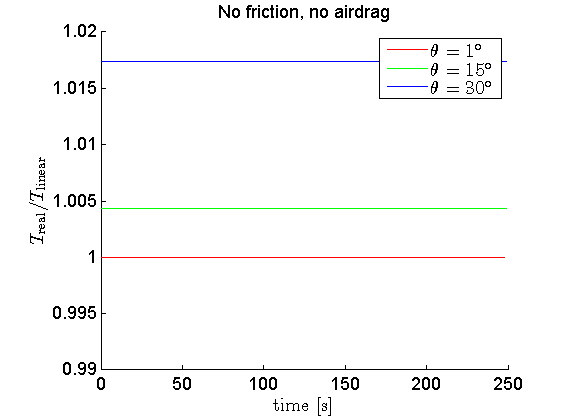 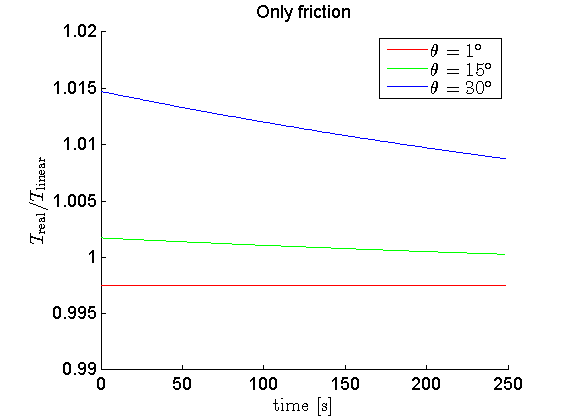 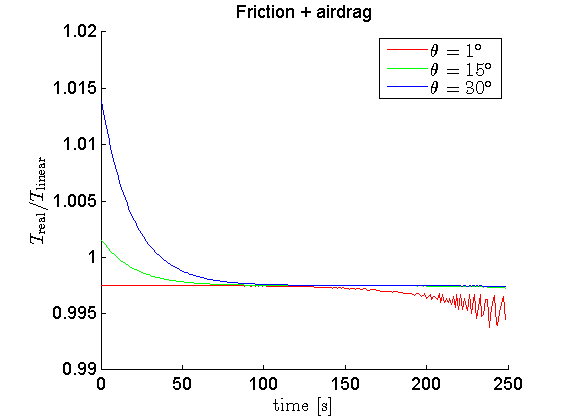 So I'd say you're right -- although the initial angle matters (which is what I think the exercise was intended to teach you), it doesn't matter as much as neglecting air drag does. It only starts mattering when you repeat the experiment in a vacuum chamber.

For large amplitudes, the period is corrected by a factor of $K(\sin(\theta/2))$, where $K$ is the complete elliptic integral of the first kind. For most applications, it suffices to take the first few terms of the Taylor series of $K$.

Dissipation may be an issue. Depending on how the pendulum is constructed, it may not be true that dissipation is dominated by drag from the air. It's possible that the main mechanism of dissipation is mechanical friction (if it's hung from a bearing) or transmission of vibrations through a string (if it's hung from a string). If it is dominated by drag from the air, then the drag force is probably proportional to $v^2$, although people usually model this kind of thing with a force proportional to $v$, which produces an exponential decay of the motion.

This is pretty much well explained in the following Mathematica Simulation In general for large $\theta$ the frequency becomes a function of Amplitude and non-linearity sets in. Also the phase space plot becomes distorted.

The next error in small angle approx is keeping upto $\theta^3 $ term, which approximately suggests corrections of order $\theta^2/3!$ in frequency. The air drag being proportional to $v=\omega L$, and So if the $\omega$ is small enough then you can neglect the effects of air drag etc.

An adhoc comparison gives which is more important

15
Explanation that air drag is proportional to speed or square speed?
7
How can a pendulum have amplitude greater than $\pi$?
3
What is the source of the discrepancy in my period-amplitude graph?
0
Why for a large displacement of a mass tied to a string is not SHM

5
Small oscillations of the double pendulum
8
What will be the equation of motion of driven pendulum for amplitudes beyond the small angle approximation?
3
What is the source of the discrepancy in my period-amplitude graph?
1
Period of simple pendulum accelerated horizontally
3
How does the small angle approximation work for cosine?
1
Can you intuitively explain the decreasing time-period of oscillation with increasing pendulum length in some cases?