What is the source of the discrepancy in my period-amplitude graph?

I was taught at school that the formula for period of a pendulum is $T=2\pi \sqrt{\frac{l}{g}}$ Later I found out that this is only an approximation valid for small angles and the accuracy of this formula is decreasing when you increase the angle you displace the pendulum by. So I decided to check this myself and then compare the graph from my experiment to a graph from wikipedia.

The graph below is the relationship between "real" period divided by linear period calculated with $T=2\pi \sqrt{\frac{l}{g}}$ and the angle by which you displace the pendulum. The thing is that the $T$ in the black graph is "real" period calculated in the abstence of air resistance and friction and $T$ in the red graph is what I got from my experiment which obviously involved air resistance and friction. 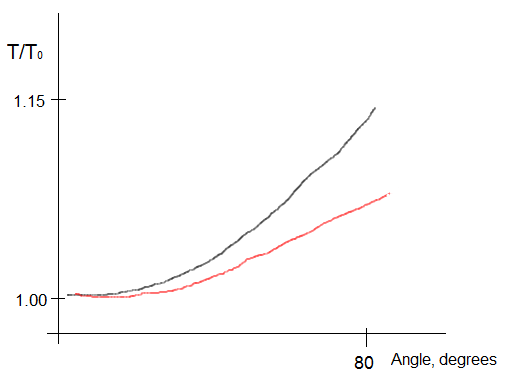 I have one hypothesis but don't know if my explanation is correct, or if it is, I don't know if it's the main factor affecting the discrepancy. It goes like that: I measured periods for $10°$, $20°$, $30°$ etc, but to be more precise, I let the oscillation for every angle be 10 periods and then I divided the time by 10 to get the value of period for a given angle. The way I would explain the discrepancy with the above information is that for large angles like $70°$ ten oscillations lasted longer and due to air resistance and friction the pendulum had more time to decrease its amplitude because it loses energy on doing work against air, etc. So even if the first of ten periods in a single measurement had an initial amplitude of $70°$, the tenth could have had an amplitude of e.g. $50°$ so the last period was smaller because the angle was smaller. Therefore, when I divided this total time by 10 I actually got a smaller value of period than I should. Check out the graphs in this answer: What is the period of a physical pendulum without using small-angle approximation? What do you think? If this reasoning is wrong, then how would you explain the discrepancy?

If your amplitude decays significantly during the experiment, then you need to consider doing a different experiment. Possible approach: film the pendulum using slow motion mode (now available on many cell phone camera). Count the number of frames between zero crossings, and measure the angle nomadism deflection. Then you can plot one as a function of the other, normalized by the number of frames for small deflection. The data may be a little bit noisy but it will be more precise.

Alternatively, use a larger (heavy, dense) bob for your pendulum - drag goes with square of the radius but energy with the cube of the radius (mass, volume). That would require minimal change to your existing setup and possibly no new equipment (assuming you have a heavier weight lying around).

Not the answer you're looking for? Browse other questions tagged newtonian-mechanics oscillators or ask your own question.

11
What is the period of a physical pendulum without using small-angle approximation?

11
What is the period of a physical pendulum without using small-angle approximation?
2
Compound pendulum clarification?
5
Is it possible to find a “replacement pendulum” for a system of two equal but perpendicular pendulums?
4
Period of pendulum in falling lift
0
The actual period of a pendulum at 90°. Looking for the correct formula
7
How can a pendulum have amplitude greater than $\pi$?
2
Does air resistance have a greater affect on longer pendulums than shorter ones due to the greater exposure it has to air?