Can the total momentum in the centre of mass frame be non-zero?

I have a question regarding the usage of the centre-of-mass definition (which I thought required the total momentum, $p_T=0$) in the solution to the question given below:

A particular centre-of-mass energy is needed to create a new particle. We will do the calculation in a so-called fixed-target configuration.

$$E_1=\frac{s-m_1^2c^4-m_2^2c^4}{2m_2c^2}$$ where $s$ is the square of the centre-of-mass energy. This is often called a ‘fixed target’ configuration as experiments were historically often done by colliding a beam of particles with a stationary target material. 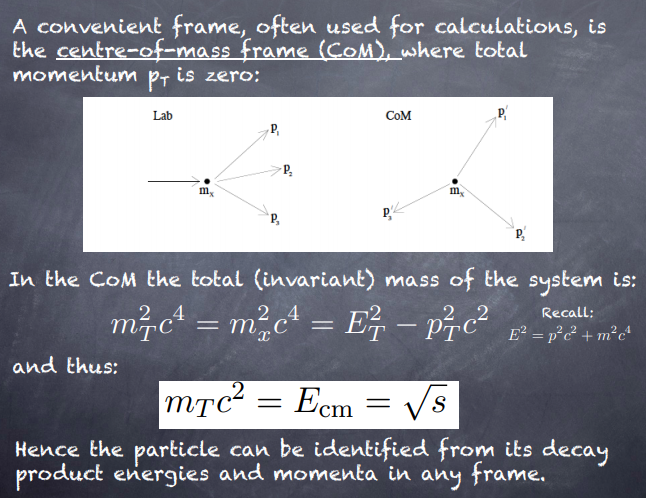 My question is, why is the author using the centre-of-mass definition (which I thought required zero total momentum) when the total momentum is actually non-zero (only one particle is stationary)?

*Image in body is from ICL dept. of Physics

We will do the calculation in a so-called fixed-target configuration.

So the calculation is done in what is usually called the laboratory frame, and calls it fixed-target in order to emphasize that the target is at rest in this frame.

Because of Lorenz transofrmations, any inertial frame can be used as long as energy and momentum are conserved in the given frame.

where s is the square of the centre-of-mass energy.

The calculation is in the lab. s is the "length" of the sum of the four vectors describing the particles involved, for any inertial frame, this is invariant for all inertial frames.

Not the answer you're looking for? Browse other questions tagged homework-and-exercises special-relativity particle-physics inertial-frames mass-energy or ask your own question.

2
Difference between: 'Rest Mass' length, 'Centre of Mass' length and 'Invariant Mass' length in special relativity and particle physics?
0
Can energy momentum four-vectors be used to solve a relativistic kinematics problems when a centre of mass energy $\sqrt s$ is given?