Does "inflation" eliminate the requirement that the big bang distributed an infinitely dense kernel of mass?

My admittedly limited understanding of the big bang is that it was an event that expanded spacetime itself along with the kernel of infinitely dense material that coexisted at the moment of the big bang.

Inflation theory concludes that this expansion of spacetime separated previously adjacent points in space much faster than any particle including a photon could traverse the distance between them.

Another theory states that virtual particle/antiparticle pairs are constantly coming into and out of existence in otherwise empty space. Stephen Hawking declared that a (portion?) of a virtual particle could become real by losing half of its pair to a black hole. Therefore it is possible to transition from virtual to real particles.

My question is; If particle anti-particle pairs can be created from empty space and if the expansion of space occurs at a rate exceeding the rate at which the individual components of the pairs can reconnect then wouldn't both halves of the pair remain real?

If so why wouldn't the inflation be capable of creating the initial mass, rather than simply distributing it? It seems that the combination of Inflation and Quantum Mechanics eliminates the requirement that the universe started with an initial mass. What is wrong with this conclusion?

Here is the chronology of the Big Bang model: 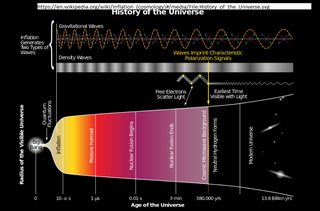 It is a theory using both General relativity and effective quantum mechanics, at present. The original pont singularity is turned, using the probabilistic nature of quantum mechanics, into a "bubble" at the far left of the image. Inflation happens later, and was necessary in order to model the Cosmic Microwave Backround homogeneity among other things. The original energy comes at the bubble, and one has to wait for definitive quantization of gravity to go further in the model.

If particle anti-particle pairs can be created from empty space

This is not possible. Energy has to be provided to any real particles, conservation of energy dictates this. Virtual particles are a mathematical representation within a Feynman integral which is used to calculate interaction probabilities. They carry the quantum numbers of the particles with their name, but are off mass shell and under an integral. The quantum numbers can be carried by a real particle only if energy is supplied so that it is on shell. Look at the Feynman diagram paragraph here.

and if the expansion of space occurs at a rate exceeding the rate at which the individual components of the pairs can reconnect then wouldn't both halves of the pair remain real?

No. Not with the mainstream physics of particle interactions.

It seems that the combination of Inflation and Quantum Mechanics eliminates the requirement that the universe started with an initial mass. What is wrong with this conclusion?

That it disregards conservation of energy in all particle interactions in the universe, after the Big Bang. The inflation would have to supply the energy for the four momentum of particles to become on-shell, and this would be another type of cosmology,not the Big Bang, and would not agree with the data and observations .

372
Did the Big Bang happen at a point?
41
An explanation of Hawking Radiation